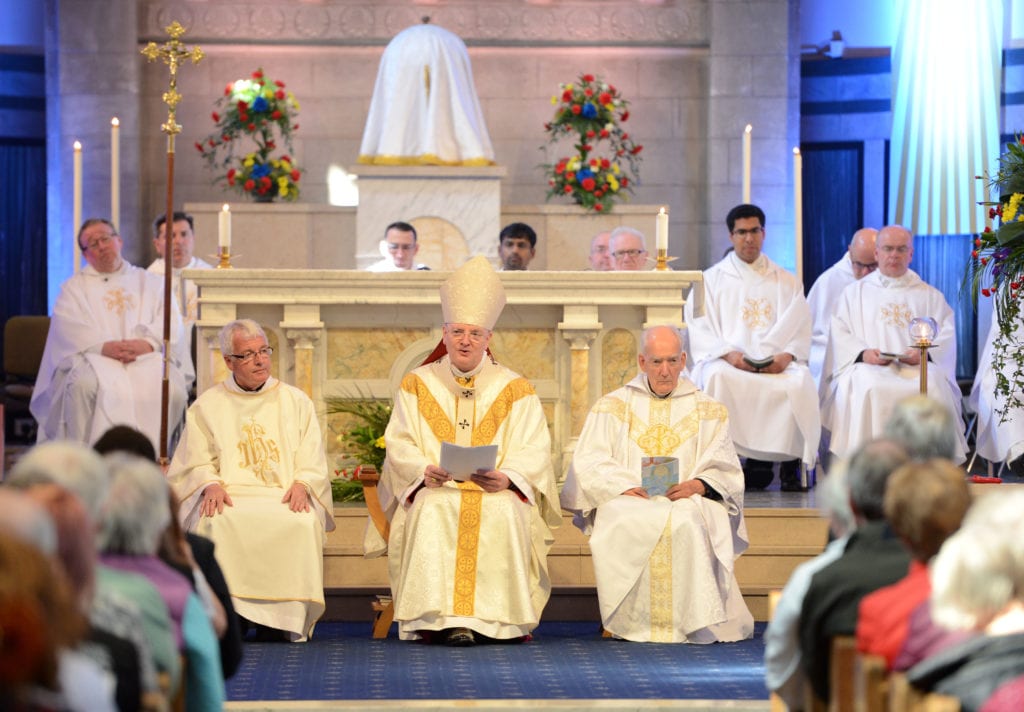 It is a very great joy to welcome you again to Dunfermline for our annual St Margaret’s Pilgrimage Mass. I’m grateful to the parish priest Fr Chris Heenan, to Mr Caldwell, Mr Pryde and to the people of St Margaret’s parish, the musicians and singers, the helpers and volunteers, and all the priests and people of Dunfermline for their warm welcome to the town. Thanks also to the Master of Ceremonies to all the civil and police authorities who have worked hard to make this a happy, memorable visit to Dunfermline. In particular, I’d like to thank the Reverend Mary Ann Rennie, Minister of Dunfermline Abbey, and her parishioners for their kind welcome this morning to their church, where we celebrated an ecumenical service in honour of St Margaret.

It was 950 years ago this year, that the young Princess Margaret, a royal visitor, but an inconvenient one, arrived at Leith. Daughter of a disinherited and exiled royal house, she found herself, by accident or design, homeless and a refugee in our country. As circumstances would have it, the king eventually took to her and married her, and she became our Queen.

Her biographer, Bishop Turgot, tells us many things about her, but he didn’t write about her centuries afterwards: no, he knew her personally; in fact he was her confessor, so he knew her mind and her soul well, maybe even better than her husband, for she was, as we now know, very devout and a woman of great faith.

Her confessor leaves us a picture of a faithful Christian woman who loved her man and loved her family, but he tells us that she also loved her adopted country and its people. She had the fire of someone newly converted to the faith and she put that faith into practice. Turgot leaves us many more of her deeds than her words in his biography of her, which suggests perhaps that she was a woman of action. She certainly did many things to set the country on the broad path towards a deeper, better, saner way of life, in harmony with the gentle tenets and counsels of Christianity, so that a City, fit for God to dwell in, might be built here. To this day, we still owe this extraordinary woman an enormous debt of gratitude.

And although 950 years have passed since Margaret arrived here, she is a much more modern woman, in our sense, than the distance in time between us might normally suggest. She made her mind known without fear, she took up clear positions, and in a time rougher than ours she achieved her goals with skill, energy and determination. But she did so, always informed by a strong faith in Christ and his power to save her, and her family, and her adopted nation.

Her story is full of many small episodes, and I’d like to concentrate on just one of them today, because it’s surprisingly relevant to us.

She herself had been an exile and a stranger, and so it happened that, once she found herself Queen, she started to realise that there were other exiles and strangers in Scotland, people who had been taken captive through the wars with the English, and who were being held for ransom here. These prisoners were often treated harshly, becoming little more than slaves, and unable to find a way to freedom, or to do enough, or to make enough money to be allowed to purchase their freedom. They were harsh times, and there were harsh punishments to go with them.

We know from Margaret’s biographer that when she learned of this kind of “slavery”, she set about personally raising money to pay for the release of these captives, so that they could be set free and allowed to go home. For another sovereign, this might have been something that was delegated to an inferior, a court official, soldiers or to the Church’s charity, but not Margaret: she acted, and she set the example. She took a personal interest in these cases and worked herself to raise the money to set these people, practically slaves in a Christian country, free again to go home. I wonder how many people were shamed into similar action when they saw their own queen taking an interest in such despised and downtrodden foreigners.

I’m telling you all this, because I recently attended a conference, just across the river, to launch a new initiative in Scotland. When we look around us here, today, right now, we don’t think that Scotland is a place where modern day slavery or trafficking exist. We flatter ourselves that it exists in murky, far-away places, or in Netflix box sets about the ancient world. But the reality is quite different. Today, in Scotland, there is a significant number of people in our country, from Africa and Asia, and even Europe, who are here, trapped in debt, and exploited by the unscrupulous. Just because they’re not chained up physically, or because we don’t see slavery or trafficking in the way the ancient world did, we may think it doesn’t exist here. But we should be in no illusion as to this reality that has quietly taken root in our country.

The initiative working to make us aware of this is called Survivors of Human Trafficking in Scotland. I’ll put this homily on our Facebook page afterwards so you can find reference to this again later, and you can look up the name to see something about it. Unhappily, the phenomenon of human trafficking is not unknown here in our quiet corner of the world.

It is unclear how great the problem is, but that makes it no more acceptable or tolerable, and it does not exonerate us from making ourselves aware of what is happening in this regard in our country. That is why, in the coming months, Fr Basil Clark, my Vicar Episcopal for Caritas, Justice & Peace, will be touch with our parish J&P groups to raise awareness in the diocese of human trafficking and of what we, all of us, may be able to do to make others more aware of the problem, and to find means to assist those who find themselves trapped through trafficking. This is a phenomenon that St Margaret would have recognised; she would have condemned it and she would have worked to change it. She did so in her own lifetime. And, so, we would do well to imitate her by informing ourselves about this problem and exploring what needs to be done to address it.

We gather today to honour our great patron and Queen, St Margaret. We ask her to intercede for us, her children, before the face of almighty God, so that we may learn from her goodness and holiness, how to be good and wise and holy in our turn. In these days, we see we see the growing suspicion among countries that ought to be friends; we see the confusion in our own country’s life, politically, socially, economically, morally; and we see a country growing rudderless without the moral guidance. That is why we turn to Margaret, Queen and mother, and offer up our prayers for our land and its people. And as we do so, we spare a thought, as she did, for the strangers among us, even as we pledge ourselves to follow her example, from the family hearth to the public square.

Thank you again for being here today. For coming on pilgrimage to honour St Margaret, may God bless you and your loved ones abundantly!