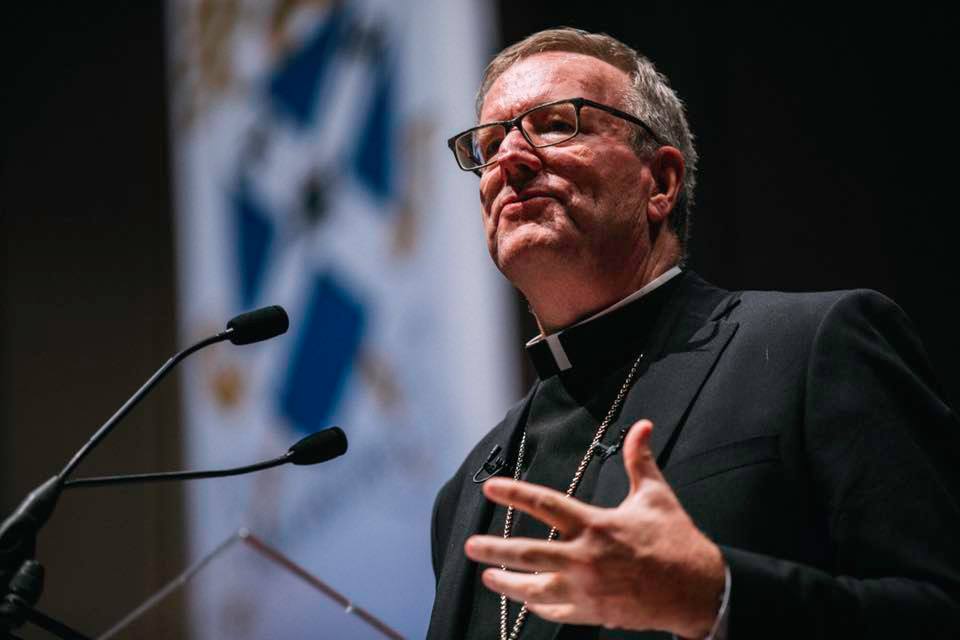 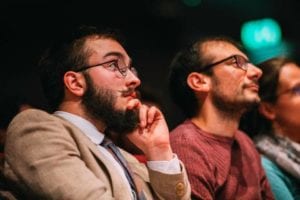 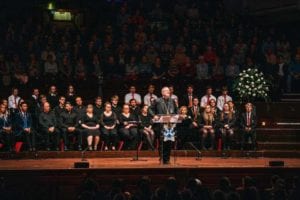 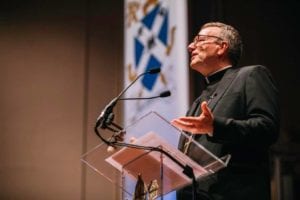 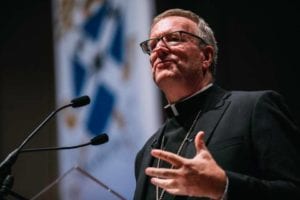 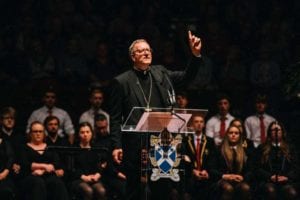 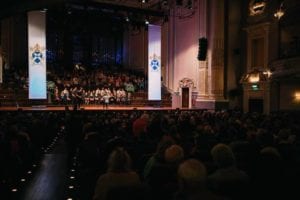 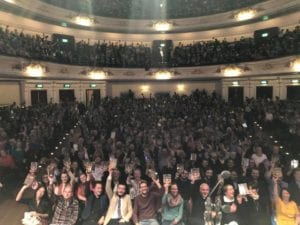 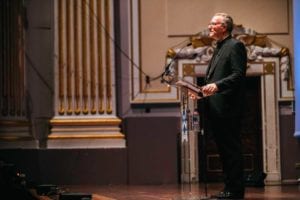 It is as edgy, dangerous and life changing to preach the message of Christ now as it was in the time of the apostles, US Bishop Robert Barron told a packed Usher Hall in Edinburgh, 6 September, write Daniel Harkins in this week's Scottish Catholic Observer.

Bishop Barron, an auxiliary bishop of Los Angeles, has become world famous for his online Word on Fire ministry, with millions of Facebook followers and YouTube videos racking up six-figure view counts.

The bishop spoke at Edinburgh’s Usher Hall on September 6 to a packed and enthusiastic crowd of clergy, Scottish bishops, and lay Catholics, many of whom were inspired to return to the Faith by the American’s evangelising.

During the hour-long talk, which was live streamed online to 20,000 viewers across the world, the bishop defined evangelisation as ‘fighting the enemies of Israel,’ ‘cleansing the holy temple,’ ‘gathering the tribes of the world,’ and proclaiming ‘the Lord of the nations’—relaying each one to the present day.

He referred to the motto of St Andrews & Edinburgh Archdiocese—‘the Cross our only hope’—and explained that someone from the Roman-era would be baffled at the faithful’s embrace of the Cross.

“This terrified people,” he said holding up his Crucifix.

“It was meant to. It was state-sponsored terrorism.

“How wonderful and strange that the Christians held up that Cross as a kind of taunt. ‘You think that scares us?’ No, God has conquered the wickedness of the world through that Cross. ‘You think that leads us to despair?’ No, the Cross is our one hope.”

The first Christians, he said, were ‘edgy’ for defying the Roman Emperor and declaring Jesus as the Son of God.

Bishop Barron’s home country is currently struggling with a crisis of abuse in the Church, and a possible cover up of abuse that goes deep into the hierarchy and bishops’ conference.

Though not directly addressed on the night, Bishop Barron said that the renewal of the Church means a return to Jesus Christ. “If we have not evangelised successfully it is because we have forgotten [Jesus],” he said.

Throughout the Bible he said, there is a keen sense that the temple has become not a place of right praise, but a place of monetary gain and political ambition.

He spoke of the radical words of Jesus when he said, in reference to Himself, ‘You have a greater than the temple here.’

“You come to the temple to have your sins forgiven, but Jesus says no, come to me. How that scandalised people in its time,” he said.

The bishop said there is a current crisis of secularism in the west—a unique problem given that the world has always been religious.

He said this was not a minor problem, as a lack of belief in God does damage to people both psychologically and spiritually, as the ‘human heart is wired for God.’

But he encouraged Catholics not to feel depressed as, because of rising secularism, now is ‘the moment for us.’

“This is our time, we who believe in Jesus,” he said. “We have enormous responsibility to proclaim Him.”

Peace, he said, comes from giving glory to God in the highest and not to any political party or nation.

“The single uniting theme of the whole Bible is to lure us into right praise of God,” he said.

“When I praise money, power, pleasure, honour, political parties or persons, and adore those things, I fall apart and the world falls apart around me.”

Everyone, even atheists, worship something, meaning something that is of highest value to you.

“What is of highest worth to you?” he asked. “Once I know that I know all I need to know about you.”

Turning the other cheek, he said, is not the language of passivity in the face of evil, but ‘fighting language.’

Don’t fight but run, stand your ground, turn the other cheek and mirror violent behaviour back, he said.

He gave the example of St John Paul II facing down the might of the Soviet Union as unleashing the power of turning the other cheek.’

“It is a provocative challenge to the evil of the world,” he said, adding that on the Cross Jesus turned the other cheek. “Was he a warrior on that Cross? You bet,” he said.

Jesus dealt with the enemies of Israel through the Cross, Bishop Barron added. “We killed God and God returned forgiving love,” he said. “What does that mean? That nothing can separate us from the love of God.”

At the end of the talk, Archbishop Leo Cushley of St Andrews & Edinburgh thanked his fellow bishop, and spoke of the need to restore Christ to ‘what used to be a Christian culture in our capital city and country.’

“Without the Lord what kind of culture can we build?” he asked. “It won’t stand, it will fall. So we are extremely grateful to you for taking the time to visit the United Kingdom.”