Sacred vestments belonging to soon-to-be canonised Cardinal John Henry Newman (1801–90) are set to become a star attraction at Abbotsford in Roxburghshire when the home of Sir Walter Scott reopens to the public 1 March.

“The news that Cardinal Newman is now to be made a saint has rekindled interest in the vestments, and we have already had calls from visitors who want to come to see them,” said Giles Ingram, Chief Executive at Abbotsford.

The canonisation of Blessed John Henry Newman was officially approved by Pope Francis on February 12, and is expected to take place later this year. It was in 1852 that Cardinal Newman first visited Abbotsford where his lifelong friend, James Hope Scott, resided with his wife Charlotte, the granddaughter of Sir Walter Scott. The married couple had converted to Catholicism the year previous.

The Cardinal then visited Abbotsford again during the summer of 1872 during which time he was influential in winning many coverts to the Catholic faith, particularly among the neighbouring landed families. He and James Hope Scott also paved the way for the foundation of several new Catholic churches across the Borders.

The vestments were gifted by Cardinal Newman to Mary Monica, daughter of James and Charlotte, who had become a close friend. One of the chasubles is believed to include a 16th-century tapestry panel which has been mounted on to 18th-century silk. Both are now displayed in the family chapel at Abbotsford where Cardinal Newman celebrated Holy Mass.

“It is a singular privilege and blessing to have these holy relics within the bounds of our parish,” said Father Nick Welsh of St Cuthbert’s Church in Melrose, Roxburghshire.

“They are a wonderful reminder of Blessed John Henry Newman’s association with the Scottish Borders and of the remarkable apostolic influence he had in these parts, an influence borne of his saintliness and scholarliness.”

For more go to: https://www.scottsabbotsford.com/ 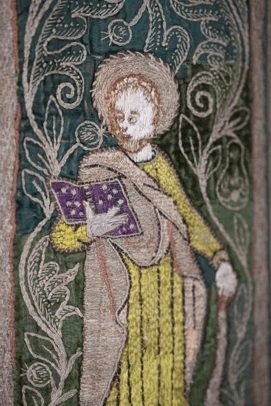 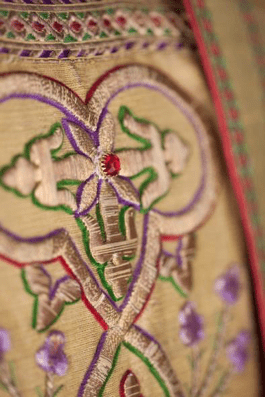 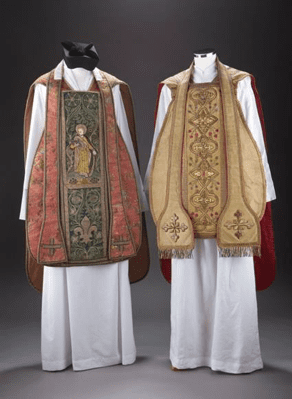