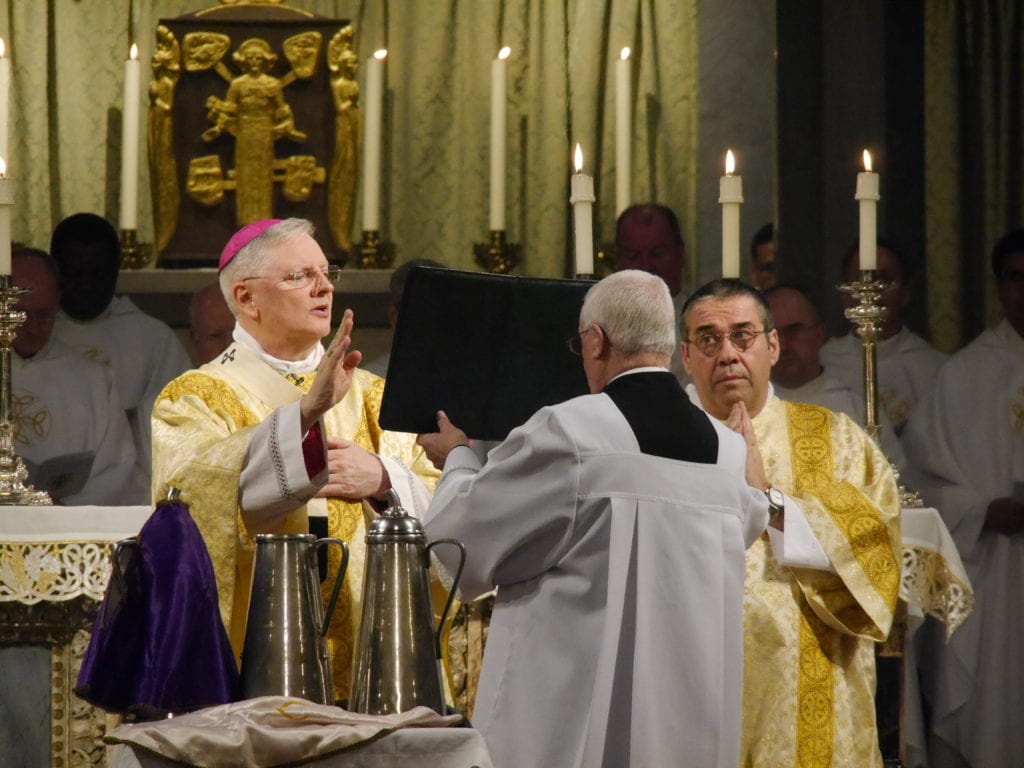 Archbishop Leo Cushley used his homily during Chrism Mass 2019 to explain how all Catholics – clergy and lay faithful – share in a common priesthood, by virtue of their baptism, which compels all to pursue personal holiness and public evangelisation.

“We all of us here are part of that priestly people, called to different but complementary missions,” said Archbishop Cushley, 16 April.

“We are anointed like our Lord with the Spirit that renews and restores us to be again children of our loving God; and like Jesus, we are anxious to share that Good News with the world.”

The annual Chrism Mass at St Mary’s Metropolitan Cathedral sees the priests of the Archdiocese gather with the Archbishop in order to manifest their unity and renew their priestly promises.

During the Mass, the Archbishop also blessed three oils — the oil of catechumens, infirmorum and holy chrism — which will be used in the administration of the sacraments throughout the Archdiocese during the coming year.

The Archbishop was keen to call all those present to pursue a deeper life with Jesus Christ and stressed the complimentary nature of the relationship between clergy and laity.

“Tonight therefore we celebrate that gift of the Holy Spirit with great joy; we celebrate our common priesthood; we pray in special way for those here who have been set aside to offer in our name the great Sacrifice of redemption, the Eucharist; and we renew our commitment to be the Priestly People we were called to be by Christ Himself, our great High Priest, the Anointed One of God. “

The tradition of the Chrism Mass is rooted in the practices of the early Church but was later absorbed into the Holy Thursday evening Mass until it was re-instituted as a distinct Mass by Pope Pius XII as part of his general reform of the Holy Week Rites in 1955. Archbishop Cushley’s homily is reproduced in full below:

Dear brothers and sisters in Christ,

First a word about Notre Dame Cathedral, almost consumed by flames just last night.  Like you, I was deeply saddened by what I saw.  We sometimes invest certain places and things with a lot of affection and significance, like an heirloom.  All the medieval cathedrals of Europe are such places, places we would wish to pass on to the next generation with all the affection we have invested in them.  They’re held in high esteem, and for Christians, they are also a window into the beauty of life in God.  So, I was very pleased to see President Macron pledge unequivocally to rebuild Notre Dame.  People are more important than things, and I’m glad no one appears to have been hurt. But things of great beauty raise our minds and hearts to God.  Notre Dame is one such place.  Our thoughts and prayers are with the people of the Archdiocese of Paris and of France; may God bless them all in this moment of loss.

Returning to our own cathedral, as you know, we gather this evening to celebrate the Chrism Mass.  Tonight’s readings are intended to help us focus our attention again upon all that really matters, the person of Jesus, and to place him at the centre of this unique moment in the liturgical year.  We, your priests, also renew our promises to serve you faithfully and to be pastors for you, after the Lord’s own heart.

So, the person of Christ is surely where our attention ought to be, as we celebrate His priesthood, and recall our participation, each according our own vocation, in Christ’s mission as priest, prophet and king (cf. CCC 1546).

In the Gospel passage we have just heard, Jesus stands in a liturgical assembly and proclaims a passage from Isaiah.  In this subtle way, he announces before his own people, in his home town, that he has been anointed to bring the good news to the poor, to heal the broken-hearted and to set captives free. He then says: “this text is being fulfilled today even as you listen”.

Here in chapter four of Luke, we hear no less than three times that Jesus is “full of the Holy Spirit”, the third time just two lines before our Gospel text.  Luke is fond of the Holy Spirit and of pointing out the Spirit’s action in the life of Christ and of the early Church.  He draws careful parallels between the action of Christ and the action of the very first disciples when they too receive the Spirit; and we should keep that in mind as we read this passage.  Both Christ and his disciples, when they are moved by the Spirit, speak out and act - almost unable to help themselves - with great clarity, enthusiasm and joy.

In the passage that he’s reading, we then hear Jesus quoting the Prophet who says that he has been “anointed”.  Throughout the drama of Holy Week, in all four gospels, Jesus is questioned again and again to declare openly if he is indeed the Anointed One, the Christ. In his trials before the Sanhedrin, Herod and finally Pilate, he answers this question subtly, knowing that his answer might be used as a pretext to put him to death; as indeed it was. What is curious about this passage from St Luke, is that these are exactly, precisely the words on Jesus’s lips.  Although Jesus may be just “quoting” Isaiah, he is the Living Word of God doing so in the Assembly of Israel, and he says: “The Spirit of the Lord is upon me, he has anointed me”.  It’s like an opening salvo.  For those who have the ears to hear it, he is declaring, publicly, in his home town, that he is the anointed one, that he is filled by the Spirit and that he is anxious to begin his great mission, just as he will eventually send out all his disciples, all of us, filled with the Spirit in our turn.  Others will read these words, before him and after him, but no one will pick up the scrolls of Word of God, proclaim them, and bring them into effect as the Word of God Himself does here.  Before Jesus said this, no one alive read this passage and made it a living reality; but once pronounced by the Son of God, his followers, anointed by the same Spirit, will in their turn make the reign of God present and effective by their words and actions.

So, Jesus here is filled with the Holy Spirit, and he is anointed Christ for a purpose.  The purpose, he tells us, is to bring Good News to the poor.  The Good News is that God in Jesus Christ has come among his people to save them.  His closeness to his people will become a reality through Jesus’s words and actions, especially as witnessed in the Gospel of Luke; but again, it is a mission that will be shared by all of us who have been anointed with the Holy Spirit, working together.

Jesus here also mentions specifically that the Good News is for the poor.  Now, a cursory glance out the door here this evening shows us that there are all kinds of poverty.  Luke usually means a material kind of poverty, as he associates poverty with simplicity and with closeness to God; but there is also a poverty of our lives, when they are eked out, desperate, purposeless, even self-destructive.  The Good News of Jesus Christ saves people from all the poverties of our humanity: Christ’s anointed disciples know this, as they have been saved from their own poverties themselves; and going out, they bring what they themselves have received, to share from their own story of salvation a way to break through the poverty of our humanity and head towards the simplicity and the goodness that come through restored friendship with God.

Next, Jesus proclaims “liberty to captives”.  Again, there are all kinds of captivity.  Jesus declares liberty to those captive, those in prison, yes, but also everyone who though their habits and their lives have been bound up too long, captives of Satan’s cunning and malice.  By extension again, those anointed like Christ, his priests and people, will proclaim the possibility of change and liberty through their own experience and example, knowing how they have been changed by the forgiveness of God, and touched by the indwelling Gift of God’s Spirit.

Finally, Jesus tells us in this passage that this event is happening here and now, in our very midst.  He meant it then, but he still means it for us today as well.  This is possible, today, here and now, because we are all of us a part of the Mystical Body of Christ, God’s Anointed One. Through our own anointing in the Sacrament of Confirmation, we are part of Christ’s mystical body, with our distinct but complimentary roles and functions.

The words spoken by our Lord tonight in our hearing are transformative, utterly life-changing.  All of us here who have been anointed by Sacred Chrism and who have received the indwelling Gift of God’s Holy Spirit, have a story to tell.  We have Good News about how God’s love and forgiveness have changed our lives forever; how we have been freed from our poverty of life and outlook; how we now appreciate our need of God’s mercy; how much the joy of our own liberation means to us; and how much we wish to share that with the whole of creation.  We all of us here are part of that priestly people, called to different but complementary missions.  We are anointed like our Lord with the Spirit that renews and restores us to be again children of our loving God; and like Jesus, we are anxious to share that Good News with the world.

Tonight therefore we celebrate that gift of the Holy Spirit with great joy; we celebrate our common priesthood; we pray in special way for those here who have been set aside to offer in our name the great Sacrifice of redemption, the Eucharist; and we renew our commitment to be the Priestly People we were called to be by Christ Himself, our great High Priest, the Anointed One of God. 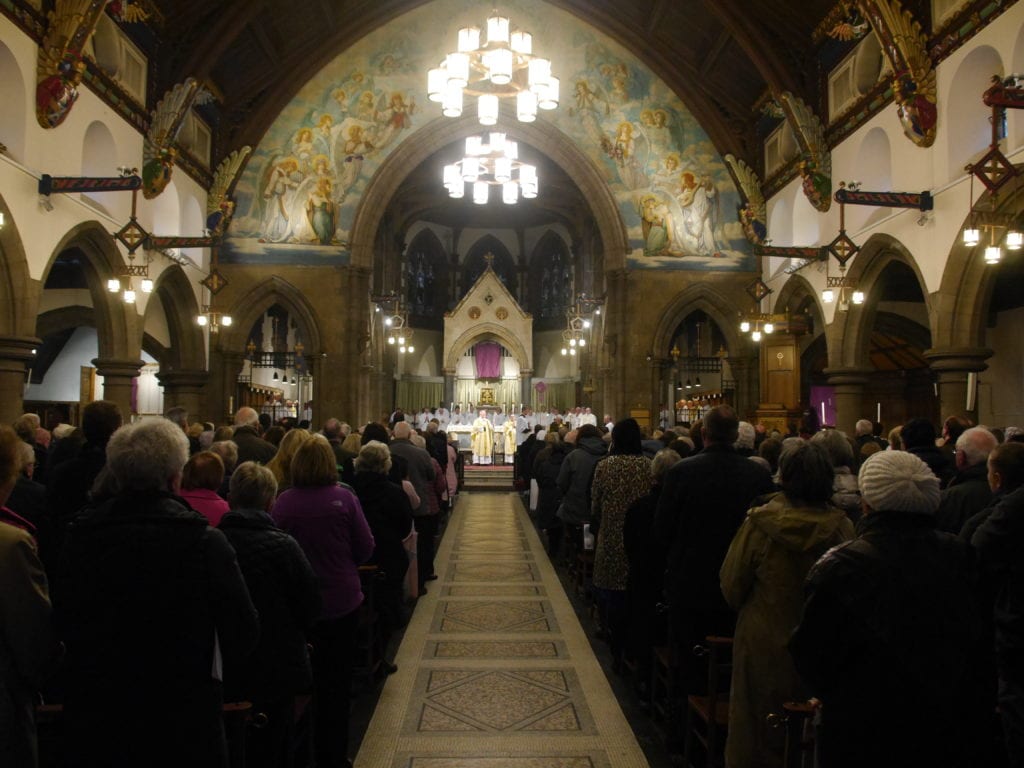 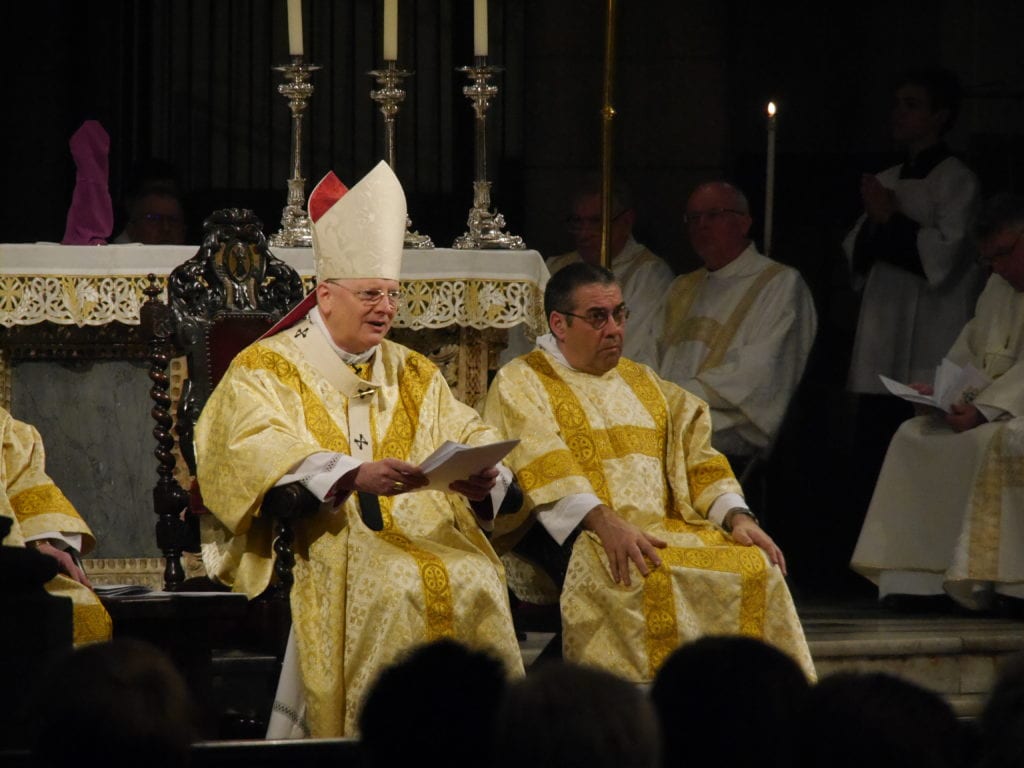 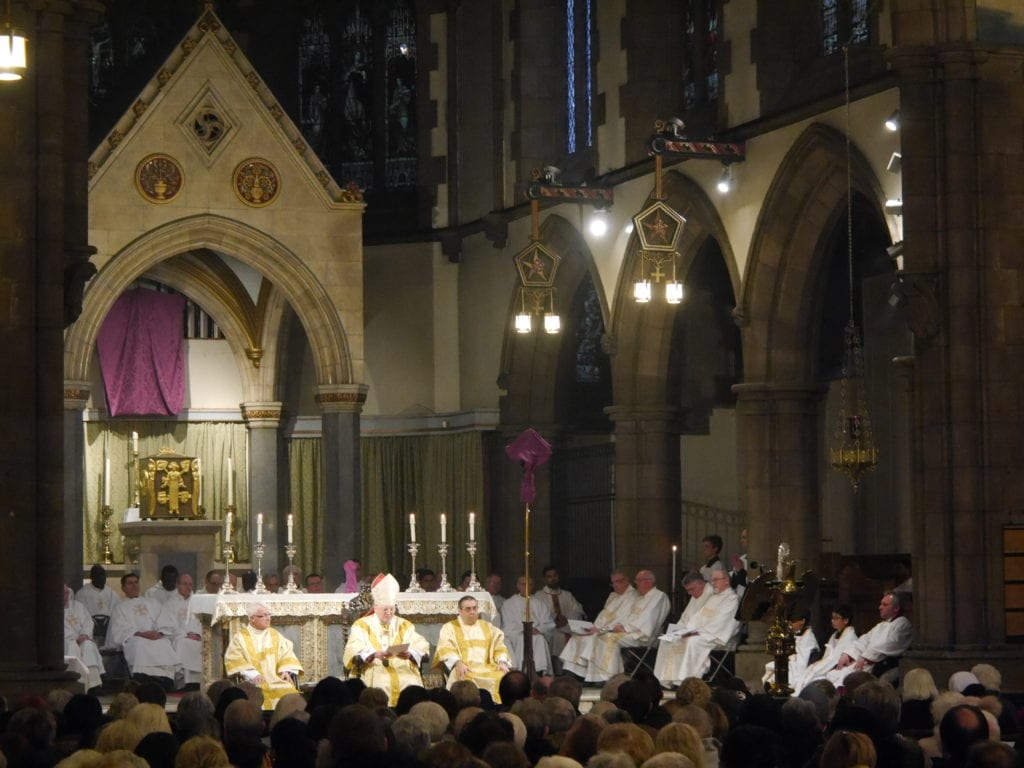 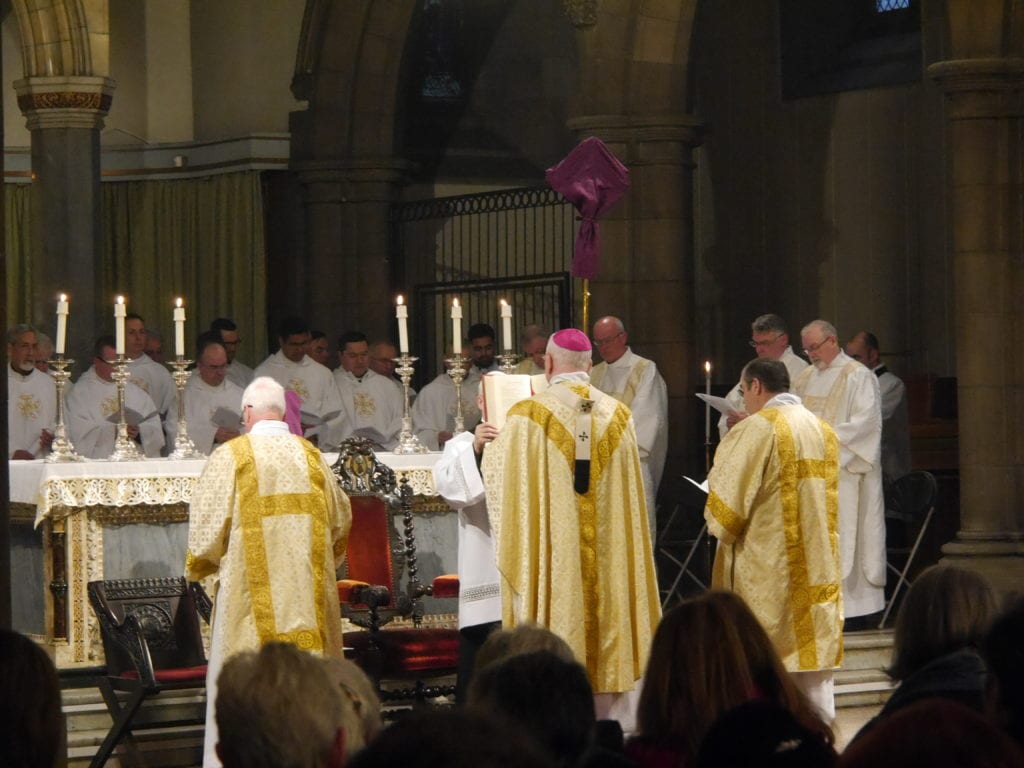 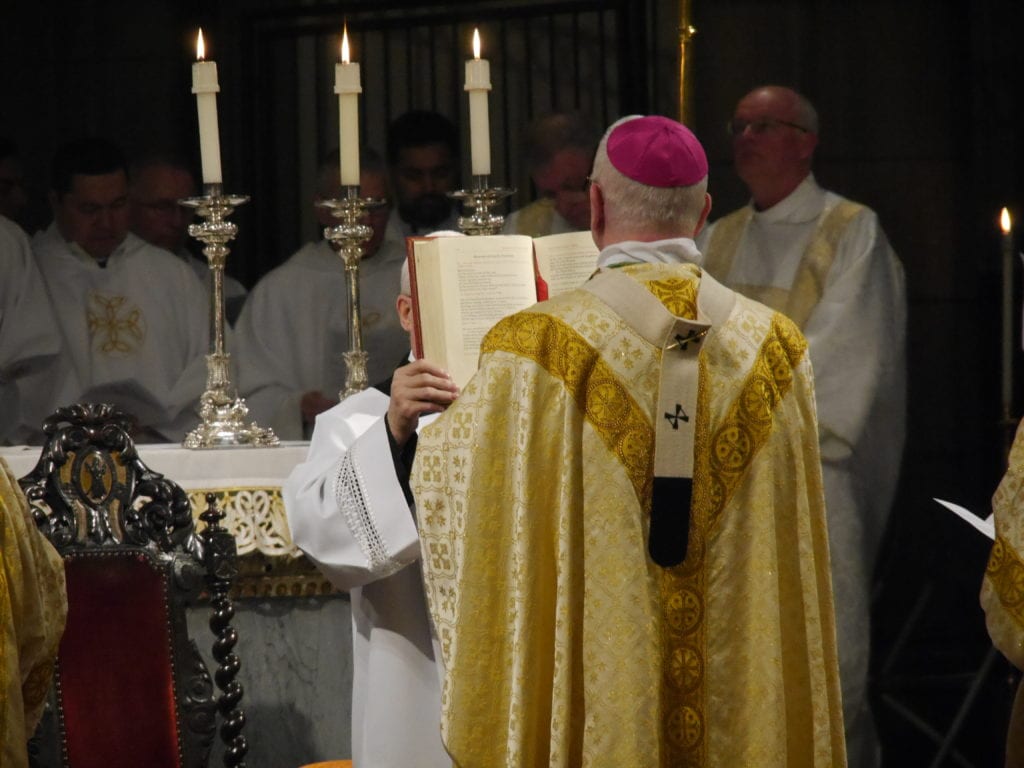 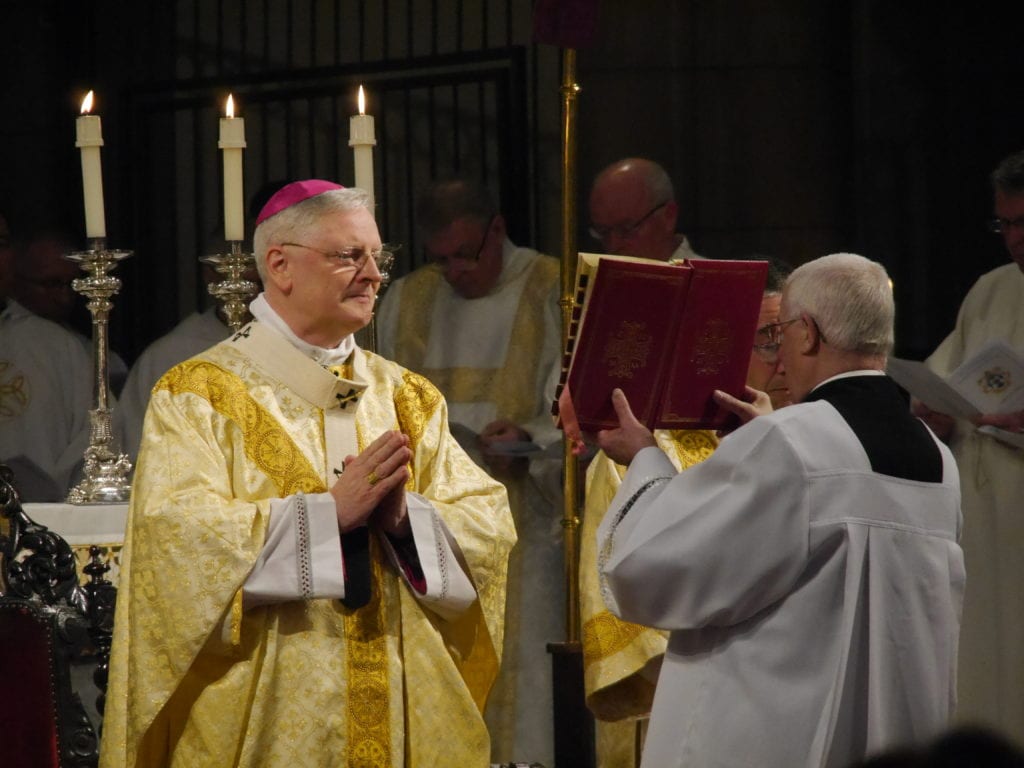 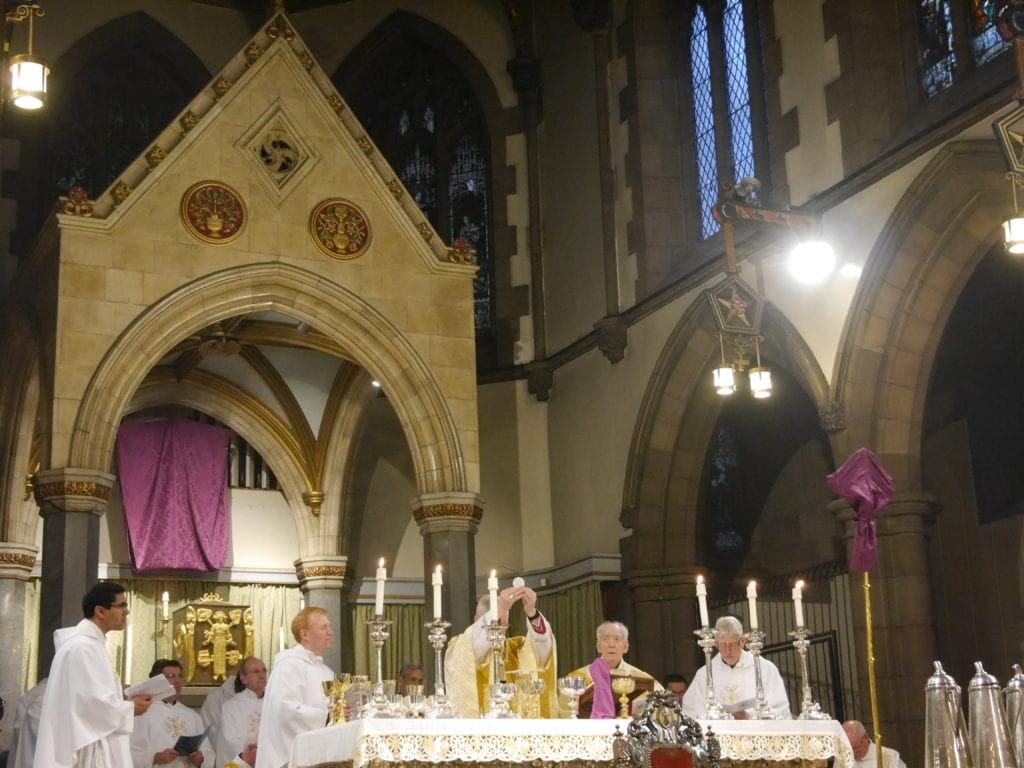 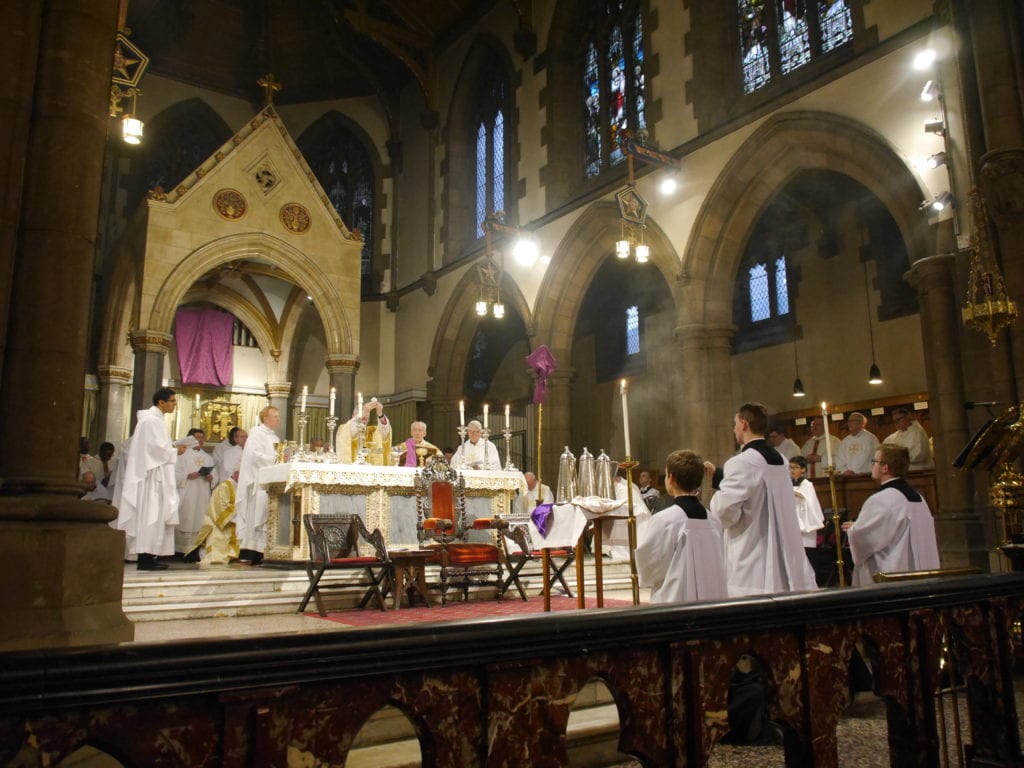 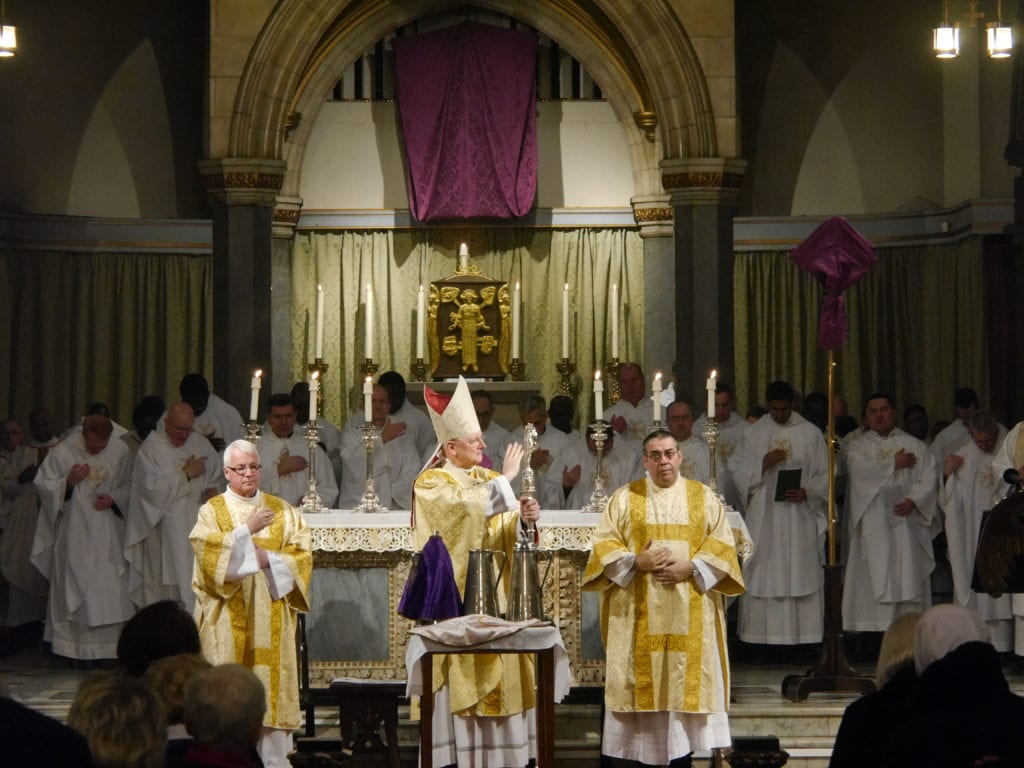