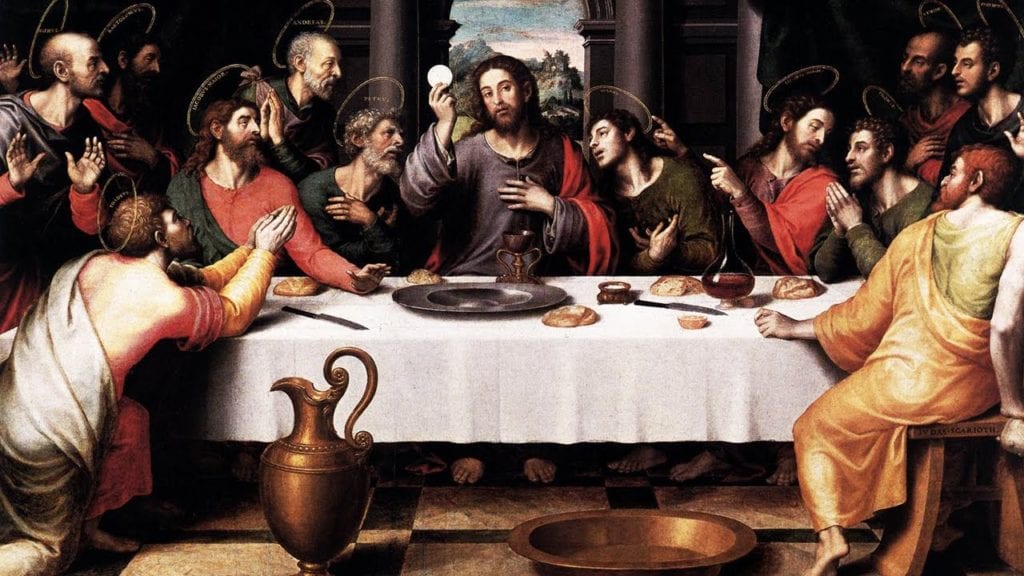 “In the Eucharist that we offer tonight, we are proclaiming Jesus’s death.  Calvary and the Eucharist are one and the same; and to participate in the Eucharist, on any day, is to join Christ in His death on the Cross,” said Archbishop Cushley to the congregation present at St Mary’s Metropolitan Cathedral in Edinburgh, 18 April.

During Holy Mass, Archbishop Cushley washed the feet of twelve parishioners of the cathedral in imitation of Christ’s washing of the disciplines feet at the Last Supper. After the dismissal, the Blessed Sacrament was taken from the tabernacle adjacent to the high altar and carried, in solemn procession, to an altar of repose. This is in imitation of Christ retreating to the Garden of Gethsemane with his disciplines in order to pray. In similar fashion, many cathedral parishioners stayed for several hours in order to prayerfully keep Our Lord company during his agony in the garden. The evening concluded with Compline, the Night Prayer of the Church. Archbishop Cushley’s homily is reproduced in full below:

Tonight, we begin our entry into the great Mystery of Easter.  Let’s remember first of all, that these three days, from this moment on, are not three days of preparation for Easter; these three days are all of them together a celebration of Easter.  During them, we recall solemnly the Lord’s passage from this world to the Father; and we not only recall them, but we are immersed in their reality and drawn to participate in them, fully, with deep reverence and joy.

The Lord’s Cross stands over all the events of these three days: its victorious radiance on Sunday, its discreet presence in the Eucharist tonight, its cruel reality during tomorrow, Good Friday.  The ancient Church sometimes represented the Cross in its iconography as if it were studded with precious jewels, and placed on a cushion.  We, too, regard the Cross as an instrument and a sign of victory, and as a throne of glory for the Lord.  And as it is the means of Christ’s great victory, we will genuflect before it tomorrow, and even kiss it.

And, at the centre of this great Mystery, is the person of Christ.  Jesus, sent by Father, anointed by the Spirit, ready and willing for this supreme moment, and who embraces His destiny lovingly, showing us just how much He loves us, through pain and humiliation, through misunderstanding and mistreatment, through suffering and death, even while we are sinners, opposing Him or even indifferent to Him.

His are the actions of One who has come not be served, but to serve.  And to help His disciples understand that better before He goes to the Cross, He makes one more simple gesture of service, in the Washing of the Feet.  For us nowadays, this action is from another epoch, almost incomprehensible to us, but we do well to try to grasp it in its proper context and meaning.  In the ancient world, people walked; they walked a lot.  Here in Edinburgh city centre, in the remnants of the medieval Dominican Friary in Infirmary Street, I was shown a number of graves there found just a couple of years ago: around and within the Friars’ chapel, the City Council discovered the bones of the Friars buried there in the middle ages: they were a little shorter than us, lighter than us, many with bow legs or who had died young, and so on.  But the thing that struck experts was how nearly everyone buried there had flat feet.  After a while, they realized that the Friars – who had taken vows of poverty – didn’t have horses.  In other words, they walked everywhere, often without shoes, and their feet were worn out ,and flat from walking.  It would not have taken them much effort to understand what a useful, sensible and dirty business it was to wash someone else’s feet, why it was a servant’s job, and why Jesus’s gesture in the Gospel here tonight is not only practical, and dirty and embarrassing, but also – as people with sore, flat, over-used, painful feet - a gesture of affection and love and service.

St John is so struck by this, that he records it for us and places it here at this supremely Eucharistic moment in the story of Jesus’s journey to Calvary; and St Peter, recorded in the event, is so struck by what Jesus does that he makes his clumsy but well-intentioned interventions.  On this occasion, he recovers himself well, and it gives our Lord the opportunity to remind us of washing in another way, not just as a gesture of love, as here, but also as the washing away of the dirt of sin accomplished in His death on the Cross, and in our incorporation into His death through Baptism at the Easter Vigil.

These are just some of the reasons that the Roman Rite has, over the centuries, proclaimed tonight this passage, rather than the Gospel text of the institution of the Eucharist.

Besides, we have St Paul’s first letter to the Corinthians tonight to remind us of the Lord’s words as He instituted the Eucharist on Holy Thursday evening.  In this brief but supremely important passage, St Paul lets us understand that the Eucharist does one very important thing: “every time”, he says, “you eat this bread and drink this cup, you are proclaiming” Jesus’s death. So our understanding of the Eucharist is not something we’ve invented recently, or elaborately wrought at a great distance in time from the person of Jesus or the events on Calvary: here it is, just as we understand it, just a few years after our Lord, in St Paul’s writings.  In the Eucharist that we offer tonight, we are proclaiming Jesus’s death.  Calvary and the Eucharist are one and the same; and to participate in the Eucharist, on any day, is to join Christ in His death on the Cross.  We do so in the hope of paradise, yes, but also in the hope of sharing in and carrying in some small way Christ’s sufferings, and for His own sake, not ours.

St Paul does two other things here: he tells us that Jesus Himself says - once over the bread and then over the wine - that what we do in the Eucharist is a memorial of Him.  But this is not just about us remembering these events; it is about Almighty God who Himself remembers, and who makes Calvary and its salvation present and effective among us.

And the second point is also one which connects us directly with the reality of what we remember.  St Paul says here, “This is what I have received from the Lord, and in turn passed on to you”.  Paul understands that what he does in the Eucharist he has received from the Lord Himself.  This is the Lord’s command to Paul, and he in his turn commands his disciples at Corinth to do the same.  Here St Paul lets you and me know that, what we do here tonight is connected back through the generations all the way to Paul, and to the Lord Himself.  We do what we do tonight in memory of the Lord – and we do so at His command, as He asked us to; and we do so in the way that he wanted us to.  This is a great comfort and an encouragement to all of us who wish to be faithful to the Lord, especially on the night before He died.

Finally, in the Gospel tonight, the Lord Himself says, “I have given you an example so that you may copy what I have done to you”.  He refers to the Washing of the Feet, but He also surely refers to this whole Eucharistic night, when we recall Him and His loving gestures, the meaning He endeavoured to convey through them to His closest friends, the profound significance of His coming agony on the Cross, and the presence of Calvary’s sacrifice in our commemoration of Him in the Eucharist.

We take great comfort and encouragement from His words and example, as we now prepare to imitate Him in deed, in the Washing of the Feet and then in the offering of the sacrifice of Calvary.