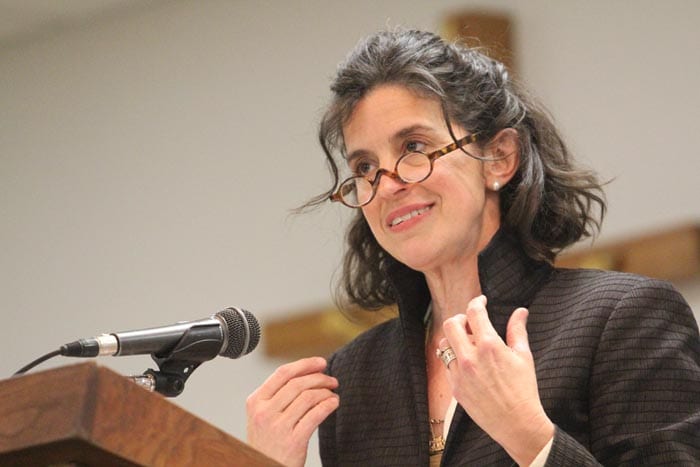 One of the leading lay female voices in the Catholic Church is to address a one-day conference in Edinburgh this October on the role of the laity in contemporary Catholicism. Professor Helen Alvaré, who in recent years has advised both the Holy See delegation to the United Nations in New York and the Pontifical Council for the Laity in Rome, has been invited by Archbishop Leo Cushley of St Andrews & Edinburgh to speak at the event which is being organised in conjunction with the Catholic Truth Society, official publishers to the Holy See.

“I was delighted to be invited to speak at this one-day conference on the role of the laity by Archbishop Cushley” said Professor Alvaré, a professor of law at George Mason University School of Law in Washington DC, 27 July.

“Since his election in 2013, Pope Francis has repeatedly reminded us that the lay faithful are in the frontline of the Church’s engagement with our contemporary culture and, so, I hope this conference will help explore the role of lay Catholics in the Church and in the world as we aim to respond to that challenge of the Holy Father to give witness to Christ in the midst of everyday life, whether that be in the family, the parish or the workplace.”

The one-day conference, entitled “The Role of the Laity in the Church Today”, will be held at the Gillis Centre in Edinburgh on Saturday, 6 October. While Professor Alvaré will address the issue of the “Empowerment of Catholic Laity in the 21st Century” during the morning session, the afternoon will see Fergal Martin, General Secretary of the Catholic Truth Society, explore “Vatican II’s Vision of the Lay Apostolate” in conjunction with his wife, Carmen. The day will conclude with a panel discussion involving three local lay Catholics.

Helen Alvaré is a Professor of Law at George Mason University School of Law in Washington, DC. In recent years, she has been a consultor for the Pontifical Council for the Laity, an advisor to the United States Conference of Catholic Bishops and consultant for ABC News. She cooperates with the Permanent Observer Mission of the Holy See to the United Nations on matters concerning women and the family. Professor Alvaré received her law degree from Cornell University School of Law and her master’s degree in Systematic Theology from the Catholic University of America. She is married with three grown children.

Carmen Martin is a graduate in Business and Economics from the Universidad Autonoma in Madrid. She then lectured at the Madrid School of Tourism while also working as an economist. She has lived in England for the last 30 years. A native of Birmingham, Fergal Martin has law degrees from both Cardiff University and London University. He is a qualified barrister of Middle Temple and worked in legal publishing before taking up his role as General Secretary of the Catholic Truth Society. He is also involved in adult parish catechesis. Married for 28-years, Fergal and Carmen Martin have six children and two grandchildren. They live in South London. The running order for the event will follow thus:

11am Registration. Tea and Coffee

11.30am Introduction by Archbishop Cushley

11.45am Professor Helen Alvaré: Empowerment of Catholic Laity in the 21st Century

2.45pm Panel discussion: The Prophetic Mission of the Laity in Evangelisation

3.45pm Closing remarks by the Archbishop