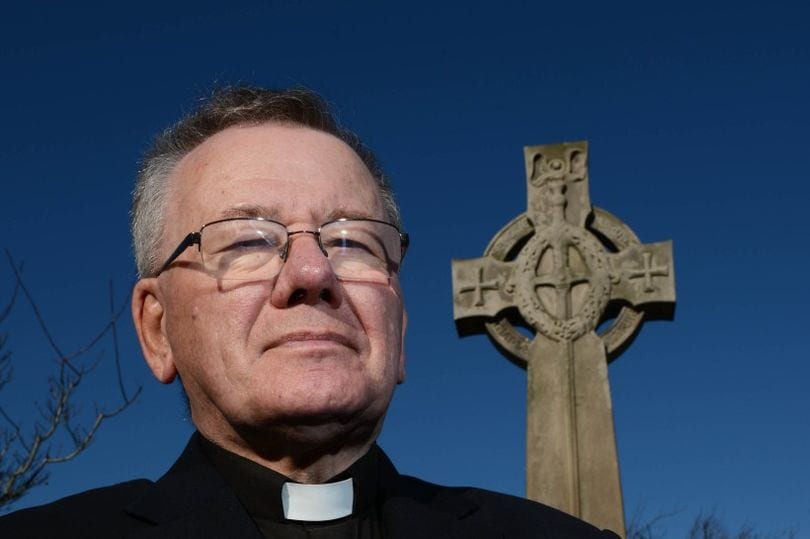 The Archdiocese of St Andrews & Edinburgh regretfully announces the death of Father John Robinson, retired priest of this archdiocese, who died Thursday 13 December after an unexpected and sudden illness.  He was 77 years old. May he rest in peace.

“Father John was a priest who was passionate about his service of God and his people,” said Archbishop Leo Cushley, 14 December.

“He was also kind, thoughtful and willing to help in any way he could, especially those he felt had been left behind or forgotten. He loved working in our parishes everywhere with a particular affection for the people of the Borders. He will be missed by us all. May he rest in peace.”

John George Robinson was born in Edinburgh on 25 June 1941 and was baptised four days later at St Cuthbert’s parish in Slateford. He attended St Cuthbert’s Primary and St Anthony’s Secondary on Lochend Road, Leith. Parishioners of St John’s in Corstorphine, the Robinson family were instrumental in the establishment of the new daughter parish of St Kentigern’s in Barnton in 1966 under the guidance of St John’s parish priest, Father William McLelland.

After a brief initial career as a qualified gas fitter, John Robinson began his path to the priesthood with studies at Campion House in Osterley, London, from 1964 to 1966 followed by six further years of study at St Andrew’s College, Drygrange, Roxburghshire. He was ordained to the priesthood by Bishop James Monaghan on 27 February 1972 at St Kentigern’s in Barnton.

In the subsequent years, Father Robinson gave unstinting and faithful service to numerous parishes in Edinburgh; Selkirkshire; Roxburghshire; Stirlingshire; West Lothian; Peeblesshire; and Midlothian. He retired in 2003 but remained very active as a supply priest in parishes across the Archdiocese. In 2016 he took up residence with the Little Sisters of the Poor at St Joseph’s House in Edinburgh where he would concelebrate daily Mass. With the closure of St Joseph’s in recent months, Father Robinson moved to the Nazareth House in Bonnyrigg and then onto the Little Sister’s residence in Robroyston in Glasgow. He died in Glasgow Royal Infirmary. May he rest in peace.