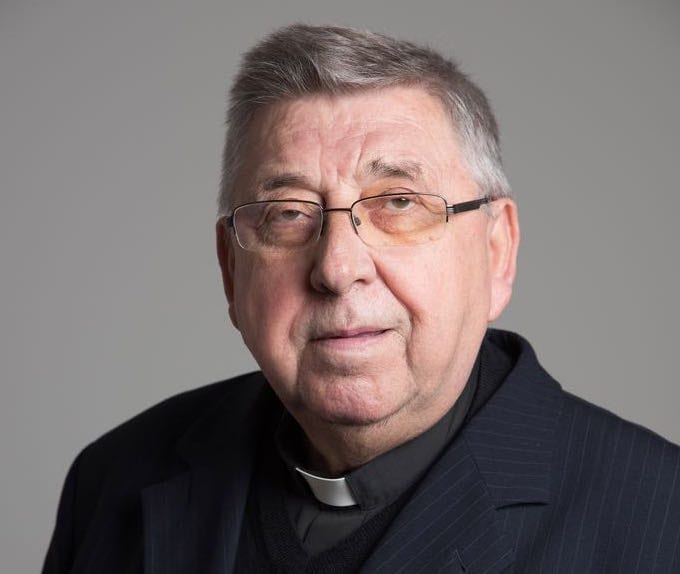 The Archdiocese of St Andrews & Edinburgh is deeply saddened to learn of the death, 20 June, of Fr Wojciech Kowalski SDS, former parish priest of St. Pius X in Kirkcaldy and of St. Ninian in Bowhill. He was 74 years old. May he rest in peace.

"Fr Wojciech Kowalski will be remembered by many confreres as a sacrificial, devout and zealous Salvatorian who skillfully combined the missionary vocation with scientific and didactic activity," said his good friend and fellow Salvatorian, Fr Edward Wanat SDS.

Archbishop Leo Cushley will offer a Requiem Mass for Fr Wojciech tomorrow evening, Tuesday 26 June, in St Pius’ at 7pm. All are very welcome. Fr Wanat's obituary is produced in full below:

Fr Wojciech Kowalski was born on 29 January 1944 in Siedlce, near Kielce. He grew up with his brother and sister in the family of Jan and Stanisława. Was baptized 13 February 1944, in his home parish in Łukowa. In 1951-1958 he attended elementary school in Siedlce. In 1958, he began his studies at the Minor Seminary of the Salvatorian Fathers in Dobroszyce. On 11 June 1958, he was confirmed by Bishop Jan Jaroszewicz in Łukowa parish.

After two years of education, on 14 August 1960, he joined the Salvatorians in Bagno accepting the name ‘Tarsitius.’ After novitiate, on 15 August 1961, he took his first religious profession in Bagno. Then, after completing his secondary school education 1961-1968, he became a seminary student of the Salvatorian Major Seminary in Bagno. He took final religious profession on 15 August 1965 in Bagno. He was ordained to the diaconate on 21 June 1968 at the Cathedral in Wrocław by Bishop Paweł Latusek. After graduating from the Major Seminary, on 14 June 1969 in Mikołów, he was ordained to the priesthood, by Bishop Herbert Bednorz.

The first assignment of Fr. Wojciech was a religious house in Nałęczów, where from 1 September 1969, in St. John the Baptist parish church became a parochial vicar and catechist. On 5 April 1970, Fr. Wojciech Kowalski submitted to his Superiors a request to undertake Biblical Studies at the Catholic University of Lublin. After receiving permission, on 1 September 1971 he was transferred from Nałęczów to Lublin where he studied the Bible until 1975.

On 26 November 1973, he achieved a Master's degree in Biblical Sciences. In 1975-1978 he continued his studies at the Catholic University of Lublin. At the same time, he was a vice-superior of the community in Nałęczów and a Lecturer of the Holy Bible at the Major Seminary in Bagno; he was also a retreat preacher. The culmination of his studies at the Catholic University of Lublin was his defense of the doctoral dissertation entitled "The fear of God in the light of the psalms," which took place on 24 January 1978.

The next place of Fr Wojciech pastoral and scientific ministry was Trzebnica. There, 1978-1979, he was a catechist and Lecturer at the Major Seminary in Bagno. The missionary enthusiasm was burning in him, therefore several times he applied for permission to travel to Tanzania.

From October 1978 to June 1979, he worked at the Salvatorian Vocation Center in Trzebnica. On 25 June 1979, he left Trzebnica and went to Warsaw for a mission preparation course of Africa. Then 1979-1980 he stayed in London, where he took English language course.

The next stage of the ministry of Fr. Wojciech was Tanzania. He arrived there on 5 July 1980. At first, in the Black Continent, he took an intensive Swahili language course in Musoma Makoko (15 August to 5 December 1980). In 1981-1987 he was the Lecturer of Bible in the Inter-diocesan Seminary of St. Karol Lwanga in Dar es Salaam. At the same time, he was superior of the Salvatorian community in Dar es Salaam (1985-1987) and a temporary parish priest in St. Maurus in Dar es Salaam Kurasini (1 November 1987 to 31 December 1987). The next missionary place of Fr. Wojciech was a community in Masasi, where (1988-1993) he held the office of Superior, Master of Novices and Lecturer of the Bible. He also served as a Vicar of the parish in Makulani (17 January to 31 July 1991). In 1993-2000 he worked in Morogoro as Lecturer of the Bible, a Librarian, and as Dean of the Salvatorian Major Seminary. He skillfully combined all these offices and duties related to scientific work with pastoral ministry.

After 20 years of missionary and scientific ministry in Tanzania, Fr. Wojciech asked the provincial superior to return to the apostolates in his native province. He was sent to the community in Elizabeth, USA, where in 2000-2003 he was a vicar of the local parish. In February 2003, Fr. Wojciech once again returned to Morogoro, where he was the Lecturer of the Bible at the Major Seminary. After two years, he returned to USA and was sent to the Community in Merrillville. On 12 October 2005, he took office as a parish priest in Moosupe (Connecticut), which he held in 2005-2008.

The next stage of the apostolic activity of Fr. Kowalski was Scotland. Since 5 November 2008 he accepted duties of a vicar in the parish of St. Mary of Lourdes in Dunfermline (Archdiocese of Edinburgh). Since 4 September 2009 he was a bursar of the newly erected community in Kirkcaldy. From 4 September 2010, he became the parish priest of St. Pius X in Kirkcaldy and of St. Ninian in Cardenden. On 23 August 2011, in Kirkcaldy, he celebrated his Golden Jubilee of the religious profession. The ceremony was organized by the local parish council. On 29 May 2012, Fr. Wojciech was again appointed bursar at the Salvatorian Scottish Foundation. He served in this position until 2017.

On 19 September 2017, he was transferred to the community in Piastów (Poland) where he actively helped at St. Michael the Archangel parish. He was also a consultor and vice-superior of the community.

Fr. Wojciech Kowalski will be remembered by many confreres as a sacrificial, devout and zealous Salvatorian who skillfully combined the missionary vocation with scientific and didactic activity.