Archbishop Leo Cushley celebrated a Funeral Mass for the repose of the soul of Pope Emeritus Benedict XVI at St Mary's Cathedral today (Thursday 5 January). Below is his homily.

As the late Pope Emeritus Benedict is laid to rest in the Vatican today, we too gather to pray for the repose of his soul, and to thank almighty God for the graces bestowed upon the Church through his life and ministry.

Joseph Ratzinger was a priest, an intellectual, a theologian and a thinker, almost of another age.

Until recent times, Germany was renowned for great men and women of faith who were also gifted with a great sense of reason.

Some of the very best scientists, writers, composers, and musicians of the old continent hail from the Germanic world, and its theologians, Joseph Ratzinger included, are a part of that deep and thoughtful Christian heritage. 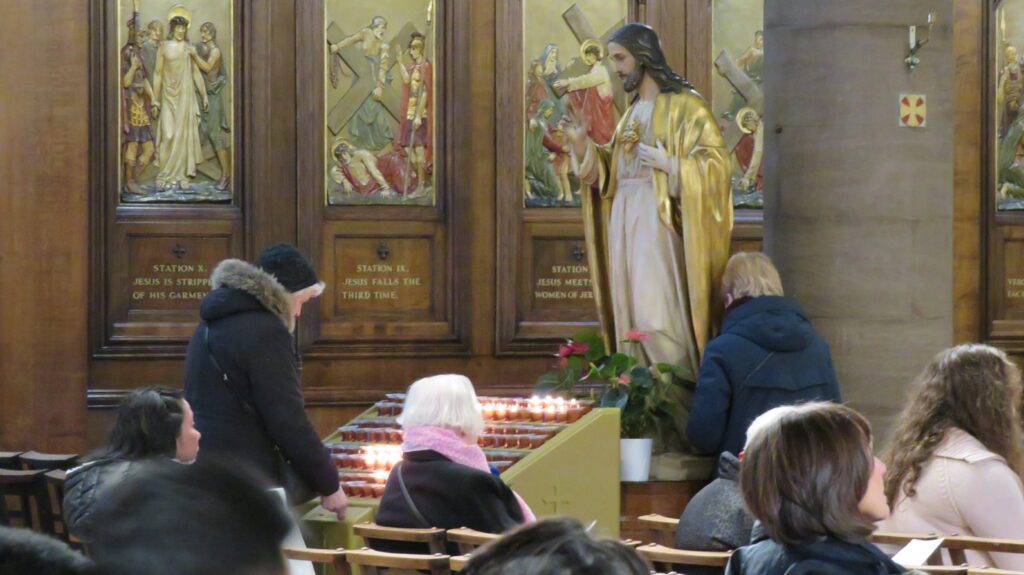 Although Pope Benedict was essentially a shy man, he was nevertheless unafraid to engage with the world, using the language of science and reason.

His dialogues with Peter Seewald, a scholar who was also an avowed atheist, may not turn out be his most important contributions to theology, but they show us something of the engagement of the late Holy Father’s pontificate with the world. 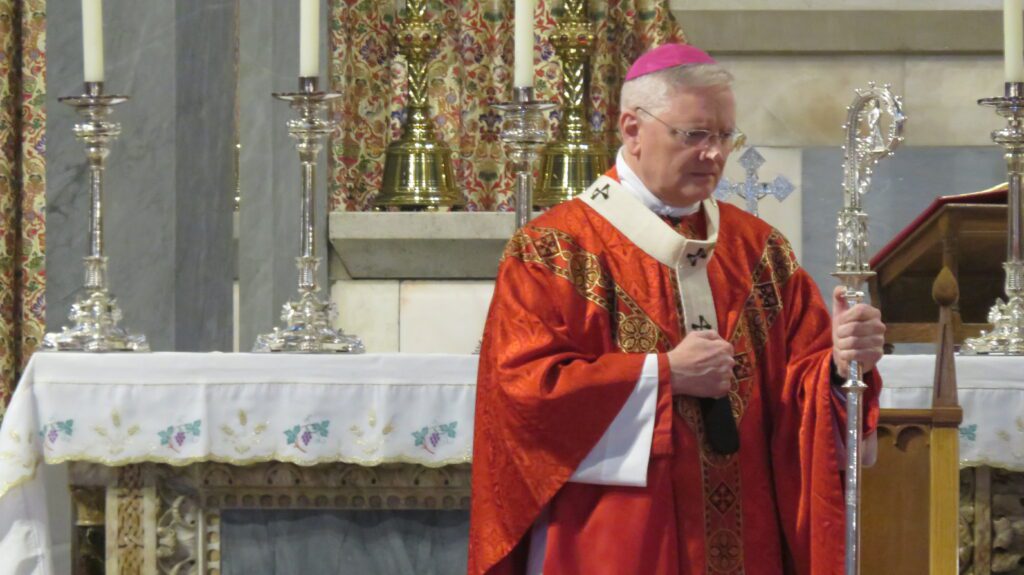 Benedict endeavoured to do this on several occasions.  When he spoke in the United Nations in New York, and later again in our own Westminster Hall, his intention was to engage with the world of politics and reason and science in a way that was genuine, warm, enthusiastic, open.

The success of his address in London paved the way for a similar address to the Bundestag in Berlin.  But his intention on all those occasions was to show that faith and reason are not in the least incompatible; rather that one can inform and influence the other, to the benefit of all.

This is a message that many in politics, universities and the arts today shy away from, preferring the silence of a cancel culture to an open, honest and sincere dialogue so necessary for the thriving of the human spirit.  Pope Benedict understood this well and articulated it well.

He was a man of reason.  But he was also a man of faith, of a genuine, transparent love for Christ.

His attachment to Him was not a series of dogmas, but a friendship with the living Lord.  Those who knew him personally, and those who worked closely with him, often reflected upon the unshowy simplicity and quiet joy in the words and gestures of this otherwise brilliant intellectual. 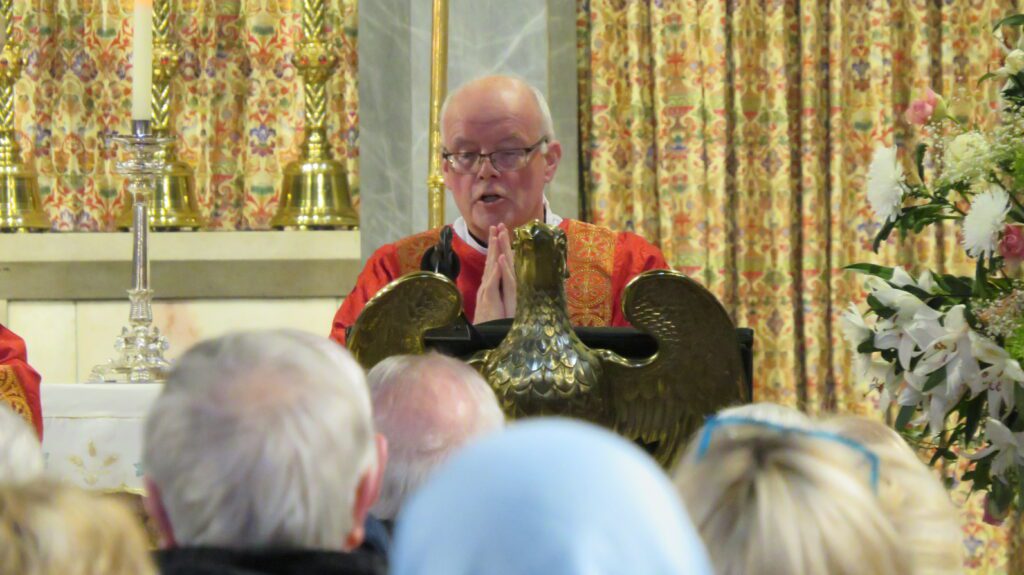 I keep meeting people who tell me that their lives were changed by reading the works of Ratzinger, who “read themselves” into the faith by reading his works.

I know of only one other writer of (more or less) our times who has had a similar effect, and that is John Henry Newman, the great Anglican churchman who became a Catholic priest and a cardinal, a man of genius but whose personal journey of faith inspired many people around him.

WATCH: Archbishop Leo Cushley reflects on his fond memories of Pope Emeritus Benedict XVI. Watch more tributes on the @ShalomWorldTV YouTube channel in its 'Salt of the Earth' special series.

Not for nothing, therefore, did Pope Benedict come to Birmingham in 2010 to beatify Newman, the second last step on the way to sainthood.  I would also add that, if you are thinking of choosing one of these two figures to deepen your faith, start with Ratzinger, he is an easier read for most of us…

The fact that Cardinal Ratzinger was elected pope in an early ballot confirms the respect in which he was held and the clarity of the choice before the Cardinals of the time.

Benedict only guided us as pope for about eight years, but he had an enormous impact upon the Church, not least during the pontificate of St John Paul II. 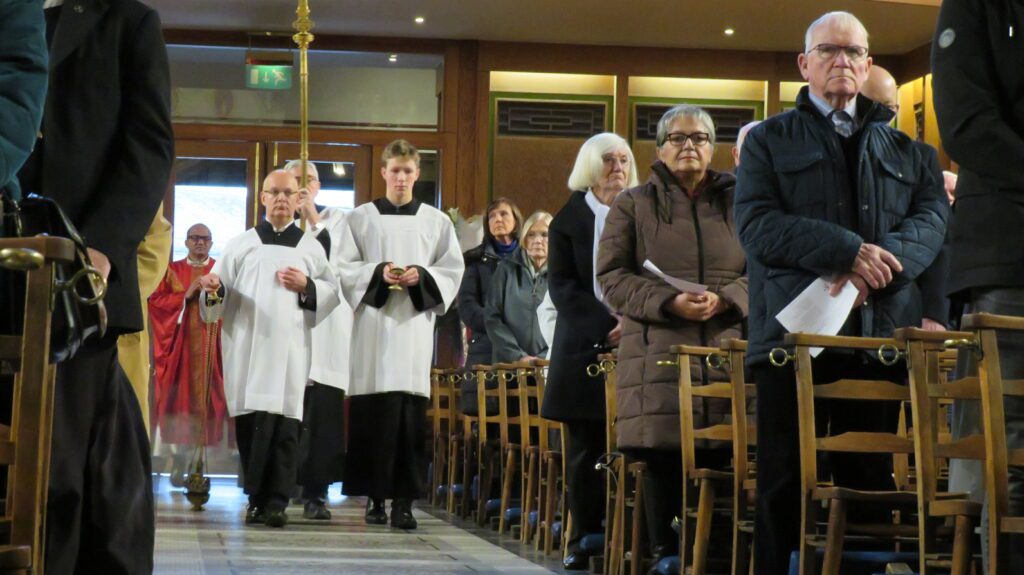 Every five years, all the bishops throughout the world go to Rome to give an account of their stewardship and to meet the prefects of all the Holy See’s departments.  As prefect of the Congregation for the Doctrine of the Faith, Cardinal Ratzinger met them all.

Of the many bishops I have come across in my time, the most frequent comment I have heard about these encounters was that Cardinal Ratzinger was always prepared, had read his papers, and was well acquainted with life in the local churches.

He also made himself available to assist any bishop who needed help.  Contrary to the media perception of him, the welcome he gave his brother bishops was always a warm and a kind one.

Nevertheless, at heart he was always an intellectual, a thinker, and this perhaps explains why the late Pope John Paul insisted on Cardinal Ratzinger continuing at his post in Rome, even though the latter had asked several times for permission to step down and return home.

At least in his last years, Benedict was able to return to a life of quiet, of prayer, and of preparation for his end.

The readings we have just heard are those chosen for the funeral Mass taking place today in the Vatican.  They are an unusual selection, and I can only imagine that they were chosen by Pope Benedict himself.  The choice of the Gospel passage, the story of the Good Thief, surely strikes us in particular.

Archbishop Leo Cushley gave this reflection on BBC Radio Scotland this morning ahead of the funeral of Pope Emeritus Benedict XVI. pic.twitter.com/1gHKuYhp15

From my time in Rome, I can still see Benedict kneeling to kiss the cross in the Good Friday Liturgy in St Peter’s, discalced, without vestments, alone, already a frail figure with a heavy burden to bear.

The choice of the story of the Good Thief also prompts me to recall a letter he composed in February of 2022.  In one passage he writes:

“Quite soon, I shall find myself before the final judge of my life. Even though, as I look back on my long life, I can have great reason for fear and trembling, I am nonetheless of good cheer, for I trust firmly that the Lord is not only the just judge, but also the friend and brother who himself has already suffered for my shortcomings […]

"In light of the hour of judgement, the grace of being a Christian becomes all the more clear to me. It grants me knowledge, and indeed friendship, with the judge of my life, and thus allows me to pass confidently through the dark door of death.

Archbishop Leo Cushley will celebrate a Requiem Mass for the repose of the soul of Pope Emeritus Benedict XVI at St Mary's Cathedral, Edinburgh, at 12:45pm on Thursday 5 January.

May perpetual light shine upon him. May he enter the eternal glory of the Lord, Jesus Christ. pic.twitter.com/x4ee0Azj3B

"In this regard, I am constantly reminded of what John tells us at the beginning of the Apocalypse: he sees the Son of Man in all his grandeur and falls at his feet as though dead. Yet He, placing his right hand on him, says to him: “Do not be afraid! It is I…” (cf. Rev 1:12-17).”

My dear friends, what strikes me about this is how he sees the Lord as his judge, it is true; but he also sees Him as his “friend and brother” who has “already suffered for my shortcomings”.

Thanks to everyone who attended today's funeral Mass at St Mary's Cathedral in Edinburgh to pray for the repose of the soul of Pope Emeritus Benedict XVI. May he rest in peace.

Here is a small lesson for us from the lived faith of Joseph Ratzinger, the late Pope Benedict.

At the centre of our faith there isn’t a dogma; rather, there is the person of Jesus of Nazareth, who truly lived and died on this earth; who truly suffered on the cross for our sins; who invites us to life and peace with him; and who awaits each one of us in glory.

Let our search to encounter the living Lord imitate that of the life of Pope Benedict.  And may Christ, the merciful judge, welcome this kind soul into glory with Him for ever.  Amen.

Archbishop Leo Cushley reflects on his fond memories of Pope Emeritus Benedict XVI in this Shalom World video. Watch more tributes on the Shalom World YouTube channel in its 'Salt of the Earth' special series here.