A Green Party MSP, supported by the Scottish Government, is proposing a Bill to ban peaceful prayers and offers of help near abortion clinics in Scotland.

The Bill proposes a jail sentence of up to two years for anyone who even silently prays near an abortion clinic.

If the Government is allowed to decide when and where people can pray this is a serious threat to religious freedom. If the principle is established in this Bill, it could easily be applied to Corpus Christi processions or the annual St Margaret's Pilgrimage if politicians decide they don't agree with what is happening.

It is vital that as many Catholics, and all concerned for freedom of speech and assembly, make a response to this dangerous Bill.

Register for one of our two sessions to find out how to respond.

Event organised by the Archdiocesan Pro-Life Office. Find out more about its work at https://archedinburgh.org/prolife/

The Bill would criminalise prayer:

The Bill would criminalise silent prayer.  If someone attended a vigil for a hour a week, for each of the six weeks of Lent , praying silently, speaking to no-one and without signage, they would commit the proposed offence of “persistently, continuously, or repeatedly occupying a safe access zone”

The proposed sentences are excessive; six months for a first offence and two years for a second.  This puts silent prayer on a level comparable to domestic assault, hate crimes, stalking etc which can also be tried summarily and then also on indictment.

Public Health Scotland report that the majority of women who have an abortion in Scotland do not attend a clinic or hospital.  They will never see a vigil.

Pre-legislation there has been no engagement with Vigil groups.  Abortion Minister, Maree Todd, ruled out bringing vigil groups into her Ministerial Working Group.

The Bill is unnecessary:

There is overwhelming evidence from Police Scotland and NHS Boards that vigils are peaceful:

FOI data shows that there are no recorded incidents of intimidation or harassment by pro-life groups at 13 Scottish locations in the 6 years between 1 January 2016 and 31 December 2021.  Compassion Scotland obtained this information:  https://twitter.com/CompassionScot

Except for Police Scotland, every public authority in Scottish Government’s Ministerial Working Group have said they have no records of any instances of vigils in 2021.  Police Scotland recorded only 1 instance which they describe as “peaceful”  (Appendix 1, below).

This credible Scottish data corresponds with a Home Office enquiry for England and Wales which considered over 2,000 pieces of evidence.  The Home Secretary told Parliament: “Having considered the evidence of the review, I have therefore reached the conclusion that introducing national buffer zones would not be a proportionate response, considering the experiences of the majority of hospitals and clinics, and considering that the majority of activities are more passive in nature”

It is vital not to accept allegations at face value but to apply challenge and scrutiny. Proponents of a ban rely on allegations which make good headlines but are often unsubstantiated, or incorrect

The proposed Bill has serious implications for peaceful freedom of expression and religion.

The small number of recent incidents at Glasgow’s Sandyford clinic do not negate the many years of reliable and credible evidence from the Police and NHS Boards that vigils are peaceful and cause no issues.  This is corroborated by Home Office finding for England and Wales, above.

Overall, there is extensive and overwhelming evidence that vigils are peaceful, prayerful and no problem exists which requires legislation at a national level. 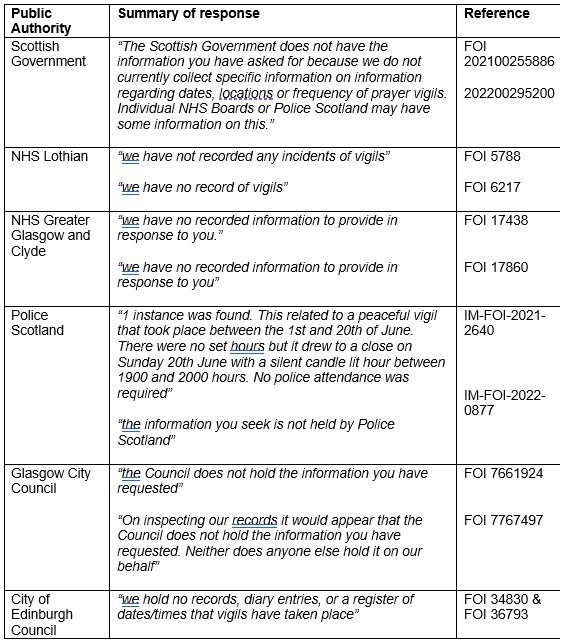