Catholics are being urged to fight a Green Party proposal intended to strip the Catholic community of its voting rights on the City of Edinburgh’s Education Committee.

Archbishop Leo Cushley wants them to ask local councillors to show support and vote against the motion to ensure schools “continue to flourish”.

He warned that if it was passed, it would “effectively remove from the Church the ability to influence the running and direction of our Catholic schools”.

In a letter to be read out at Sunday Mass in churches across the city this weekend (see below), he wrote: “This motion presents a serious threat to the Catholicity of our schools in Edinburgh and is also, in all probability, just the first step in a process to remove faith education from schools in Scotland altogether.

"It casts into serious doubt the commitment of some of our elected representatives to the future of Catholic schools."

“To deprive the Church’s representatives of voting rights on the Education Committee, where they sit on behalf of us and our children, casts into serious doubt the commitment of some of our elected representatives to the future of Catholic schools.

“There is still time to act, however, and local councillors will be sensitive to your opinion. I would therefore ask you to write to your local councillor as a matter of urgency to ask him or her to vote against this motion."

Earlier this year, Perth & Kinross Council became the first in the country to remove voting rights from church representatives. Edinburgh City Council will consider a similar proposal from the Green Party on 22 August.

Around 20% of all pupils in Edinburgh attend Catholic schools with the city containing 15 Catholic primary schools and three Catholic secondary schools.

Eileen Rafferty, religious education adviser to schools for the Archdiocese, said: “It is only reasonable that Catholic reps vote when it comes to decisions affecting Catholic education and Catholic schools. The vast majority of our reps across the Lothians and Fife are not clergy but parents and/or educationalists with rich experience in Catholic education. It is their voice that is determinedly silenced by this proposal.

“We trust that the majority of councillors will stand up for the Catholic community by rejecting this motion.” 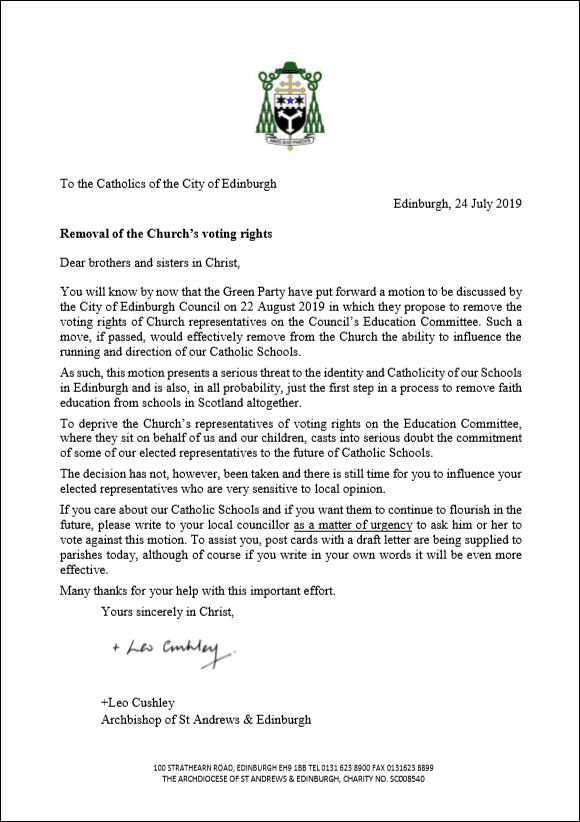