A renewed word of welcome to Our Lady, Star of the Sea, Leith, as we offer holy Mass for the repose of the soul of Mgr Brian Halloran.  Our first thoughts go to Mgr Brian’s brothers and sisters along with our sincere condolences.  Brian, his goodness and his energy will surely be missed.

I’m also grateful to the Fr Martin Moran, the Oblates of Mary Immaculate and the people of St Mary’s Leith for their warm welcome and their condolences on this sad occasion.

In the Gospel passage we have just heard (Luke 12: 35-40), chosen with Brian in mind, we hear the Lord urging us to be like men dressed for action, with our lamps lit. “Be like men waiting for their master to return […], ready to open the door as soon as he comes and knocks. Happy those servants whom the master finds awake when he comes”. To me anyway, that sounds like Brian Halloran.

Brian was a kind man; a godly man; a gentle man; frank, loyal, affectionate; a tireless and enthusiastic pastor of souls. He was “old school”: he knocked at doors, he brought people back to their faith, and he did so with great good humour.  The members of the other churches in North Berwick recognised him as a friend too, and have expressed their dismay at his death. 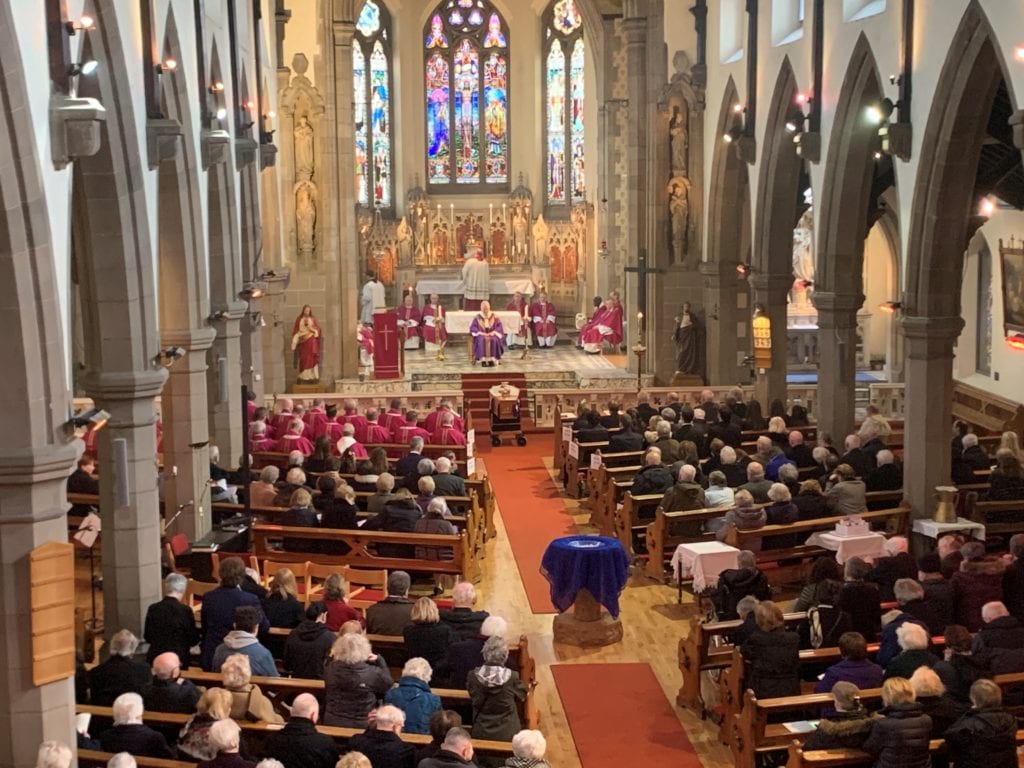 But above all, Brian was ready; he was a man of action until the day the Lord called him. The day he died, he had said Sunday Mass for his people, and he had prepared his people for Lent.  He was still working when he started to feel not well.  It’s only now that we realise he had a serious heart problem that was threatening to slow him down, but he was not someone who slowed down easily.  On the contrary, he was someone who was always enthusiastic, willing to work, in a bit of a hurry.  Even when he took a sabbatical at about 70 years of age, he didn’t actually take a break: instead he travelled to China and to Africa to visit the churches there: these weren’t holidays, but an opportunity to roll up your sleeves and improve yourself.

He was proud to be part of the first intake into St Andrew’s College, Drygrange, and he was among the first of those to be ordained from it.

He went on to complete doctoral studies and became quite an accomplished writer on Scottish Catholic history. He wrote his thesis on the Scots College in Paris, and he loved to visit Scalan, the little clandestine seminary hidden in Glen Livet during the exclusion of Catholics from society in Scotland.

But one of the things I will always remember Brian for was his description to me of the “golden thread” of Catholic clergy who, through the whole Reformation period and beyond, kept the old faith alive here, who never let it die, but passed it on to the succeeding generations with courage, tenacity and patience, and in spite of civil and political exclusion and occasional persecution.  Brian made a study of those men and was very proud of them, and he saw himself – and all of us - as standing on their shoulders.  I’ll always be grateful to him for that insight.

Even in later life, he was never very far from his books. In his sitting room in North Berwick there still hang today two big maps, of the first century Holy Land and of the earliest days of the Church as it spread through the Mediterranean.  And, not so long ago, Brian gave me a manuscript of his latest book. Among many other things, he was fascinated by the Book of the Apocalypse, and yesterday some of the parishioners at North Berwick were telling me that he had been going into it with them in some depth. I wonder what that was like! But I read the manuscript of it over Christmas; I enjoyed it and learned a few things from it too. I looked again at the title the other day. It’s entitled “The Book of the Apocalypse: Encouragement for All.

Brian was a man of Christian purpose, of energy, and ready to meet his Lord when he called him. He was good man and an exemplary priest. He was a man of hope. As he goes to his rest, perhaps we may imagine him as leaving us with a word of encouragement and hope, like his beloved Apocalypse. If, like him, we are dressed for action, ready and waiting for our master to return, the Lord will put on an apron, sit us down, and wait on us at the heavenly banquet, just as we hope and pray the Lord in His goodness will now welcome Brian.

Eternal rest, grant unto him O Lord, and let perpetual light shine upon him.  May he rest in peace.  Amen.

Tributes have been paid to a popular priest who ‘gave joyful service to his people’.

Monsignor Brian Provost Halloran died suddenly on Sunday evening, 1 March, at his home in North Berwick. He was 84.

He was parish priest at Our Lady, Star of the Sea, in the town, which he had served since 2015.

Archbishop Leo Cushley said: “Brian Halloran loved being a priest and was an example of hard work and joyful service of his people. He was the best of the old school and served us for 60 years. He died an active priest – those who knew him would agree that would have been his wish. He was a good man and a fine priest. May he rest in peace.”

Last night a much loved priest of our diocese died.

Mgr Brian was born in Aberdeen before his family returned to Edinburgh, where he attended Holy Cross Primary before heading to Blairs junior seminary. His path to the priesthood continued at St Andrew’s College, the seminary in Drygrange, and he was part of the first intake of students when it opened in 1953.

Father Andrew Forrest, of St Mary of the Assumption in Bo’ness was in the same year as Mgr Brian at St Andrew’s College.

He said: “He was very dedicated and meticulous in doing things the best he could for the diocese, as a priest of the diocese. He stuck to the old principles that have stood the test of time. He will be missed.”

Fondly remembered
Mgr Brian was ordained at St Mary’s Cathedral in Edinburgh in 1959 and served at various parishes across the Archdiocese.He is fondly remembered in St Andrews, where he was parish priest at St James’ Church from 1987 to 2010.

Fr Scott Deeley, chancellor of the Archdiocese, was a student at the university while Mgr Brian was its chaplain.

He said: “I know that many St Andrews alumni will be remembering Monsignor Halloran today with great fondness. He was a dedicated priest and an influence for great good in the lives of many young people. May he rest in peace.”

While in St Andrews, Mgr Brian wrote a PhD thesis that led to the publication of his respected book The Scots College, Paris, 1603-1792. He also later carried out missionary work, helping spread the gospel in Armenia (2005) and China (2006). He spent a year in Yendi, Ghana in 2010 as part of a sabbatical.

He was the senior priest of the Archdiocese and Provost of the Metropolitan Cathedral Chapter.

Responding to the news of his death, parishioners from across the Archdiocese paid tribute on social media.