Tributes have been paid following the death of Canon John McAllister on Saturday (10 December).

He passed away peacefully in his sleep at his residence in Dunfermline. He was 90.

Following news of his death, comments flooded onto social media to pay tribute to the much-loved priest known as 'Fr Mac'.

Brendan Murphy posted: "A dedicated priest and servant of God, with a great wit and sense of humour."

Rosemary Ryan wrote: "Father Mac RIP -  a true shepherd of his flock. Thank you for your ministry to myself and my family in the early years of coming into the church."

Please pray for the repose of the soul of Canon John McAllister who died on Saturday morning.

He passed away peacefully in his sleep, aged 90. Canon McAllister was ordained to the priesthood in 1955.

May he rest in peace and rise in glory. pic.twitter.com/Vc0oMgdOoG

Archbishop Leo Cushley said: "John was priest who always greeted you with a smile, behind which was much courage, experience and determination.

"He served in some very difficult, even dangerous, circumstances early in his priesthood and his tenacity and bravery there earned him much respect.

"He worked in many places in the archdiocese too, always with energy and commitment.

"He was also very faithful to Lourdes throughout his life, and rarely missed a chance to join the diocesan pilgrimage there.

"We will all remember him fondly upon our future visits to the Grotto.  May he rest in peace."

John McAllister was born in Leith in 1932 and was baptised at St Mary, Star of the Sea.

John studied alongside two others who would become priests of the Archdiocese – and great friends of his – Canon Philip Doherty, (who died last year) and the late Monsignor Tony McNally (died 2007). 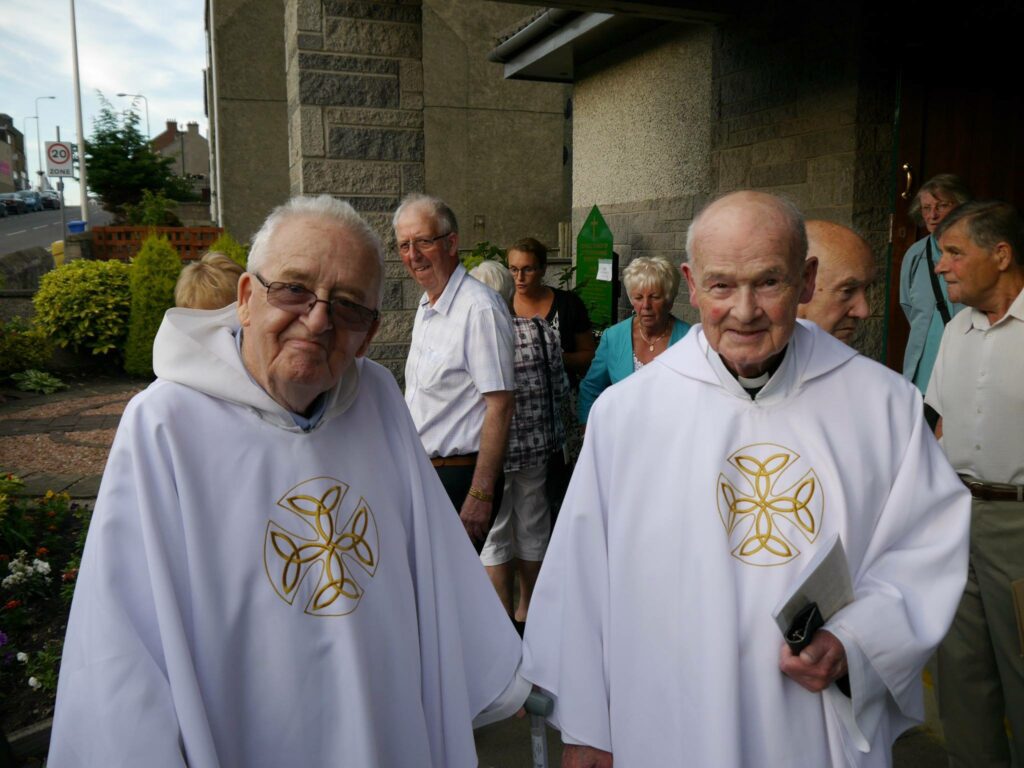 Canon McAllister (left) with his friend Provost Philip Doherty following Mass at Inverkeithing in 2015 to mark  his 60th anniversary of ordination.

Together they attended Saint-Sulpice seminary in Paris where he received a baccalaureate in Theology (the three men would regularly return to visit Saint-Sulpice later in life).

Fr John, along with Philip and Tony, was ordained to the priesthood by Archbishop Gordon Gray at St Mary’s Cathedral in Edinburgh on 2 July 1955.

He was appointed to St Francis Xavier's in Falkirk and would serve there from 1955 to 1960.

His next destination would be Africa. In 1957 Pope Pius XII  appealed to dioceses with a sufficient number of priests to send clerics to mission territories.

Archbishop Gray responded with great generosity and in 1961 Canon McAllister was one of several priests from St Andrews & Edinburgh who volunteered to work in Nigeria.

He served in the Diocese of Calabar in East Nigeria until 1966.

Speaking at his Diamond Jubilee Mass in Inverkeithing in 2015, Archbishop Leo Cushley said: “In that regard Canon McAllister did a great deal of work but I also understand that it involved many trials and suffering." 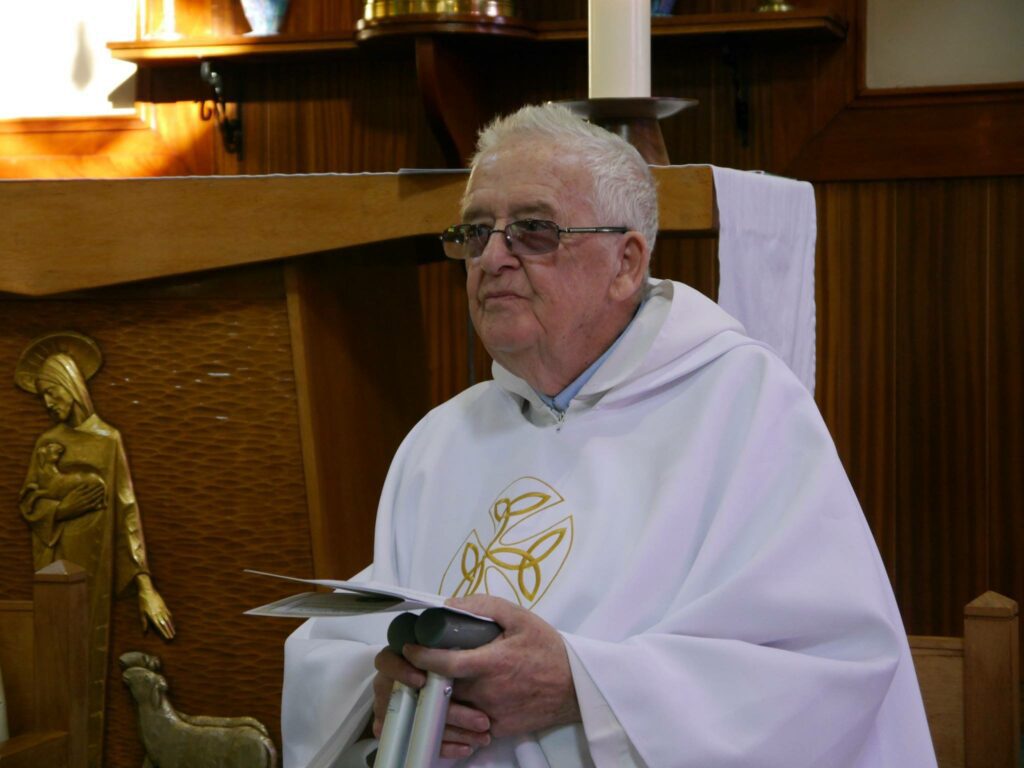 Canon McAllister at St Peter in Chains in Inverkeithing in 2015.

"In a certain way I’m happy to learn that we are celebrating his diamond jubilee on the Feast of St Thomas, who didn’t go to Africa but did go to India, and was thus somebody who embraced the mission given to him by the Lord – something Canon McAllister has demonstrated throughout his life.

“Canon McAllister has the reputation of being one of the most active and hardest working priests of the diocese with a great deal of experience. He is well known and much loved in all the parishes he’s worked in,”

Upon his return to Scotland, Canon McAllister served in St Mary’s Cathedral in Edinburgh (1966-69) before being asked to become the founding parish priest of St Paul’s parish in the city’s Muirhouse where he spent 10 years from 1969 to 1979.

He was a regular and faithful pilgrim to Lourdes, so much so that he was made an honorary Canon of the Grotto of Our Lady of Lourdes. Fr Mac pictured with a support worker in Dunfermline.

Upon his retirement he was resident in Musselburgh before finally moving to Leys Park care centre in Dunfermline.
“Thanks be to God,” said Canon McAllister following the Jubilee Mass in 2015. “It is only by His grace, by the Grace of God, that we have made it this long and he’s helped us all the way through.”
The Very Rev John Canon McAllister, 11 January 1932 – 10 December 2022. The obituary can be read here