The work and spiritual life of women religious in our diocese has been praised by Archbishop Cushley on the Feast of the Assumption of the Blessed Virgin Mary.

Speaking in his homily at online Mass  he said: “Like our Blessed Lady, our religious women say a perfect and complete ‘yes’ to God when prompted by His inspiration. They bear Christ to the world in their own flesh, by their words, by their actions and by their love for everyone."

Happy Feast Day! Our Archdiocese is dedicated to Our Lady of the Assumption. Find out more in Archbishop Cushley's homily for today's Mass, available now on our YouTube channel.https://t.co/NDtdU8ALSD#AssumptionOfTheBlessedVirginMary pic.twitter.com/KnliCfSVKZ

There are 16 different female religious orders in our diocese and the Archbishop asked for prayers for a local woman who enters a convent today.

He added: "Many women’s religious congregations have the Feast of the Assumption as the moment when young women enter religious life, take the veil, take their first vows and even profess solemn vows as nuns and religious. It is a beautiful thought to recall how our nuns associate themselves with Our Blessed Lady, assumed into heaven on the day that they give themselves to religious life."

"They follow Christ on His missionary journeys, like Mary they listen to Him, seated at His feet, like Martha they serve Him cheerfully and willingly, like Our Lady they suffer with Jesus as He hangs upon the cross. Like Mary Magdalene they keep vigil with Him in death, they welcome the Risen Lord when He appears, and they hope to reign joyfully with Him one day in the presence of Our Lady and all the saints in heaven.

"As we remember the Assumption of Our Lady today, as she falls asleep and is welcomed into paradise by her Son, we remember all the people of our diocese dedicated to Her, we remember in particular our children, their teachers and all our religious woman – our nuns – as they seek to imitate Our Lady in her love, her patience, in her sorrows and in her joys.”

Tonight we're hosting a very special event - Ask Me Anything.

It's a chance for young women to ask a religious sister anything about life as a nun. It's the first of three monthly events and our speaker is Sister Mary Margaret, of the Sisters of Nazareth in Bonnyrigg.

This event is for young women who want to find out more about the religious life in a friendly and relaxed atmosphere . It's also for those who simply want to hear what it's like being part of a religious community in 2020.

You can register at Eventbrite or simply turn up at St Columba's Church, 9 Upper Gray Street, Edinburgh.

?"Have you ever fallen in love?"

Featuring Sister Mary Margaret, of the Sisters of Nazareth, based in Bonnyrigg. If you didn't get the chance to register, no worries - just turn up. pic.twitter.com/dKZQ3UEujB

Archbishop Leo Cushley paid tribute to the role of the Augustinian community at the Annual Day for Religious in Edinburgh today.

They religious order recently announced it is to leave St Joseph's in Broomhouse, Edinburgh, which it has served since 1995.

Brothers and sisters gathered at St Margaret's Chapel at the Gillis Centre for Holy Mass in which Archbishop Cushley was the principal celebrant.

In the homily (see bottom) he said: "Not so long ago, a small community of Augustinians joined the diocese in a pastoral capacity and went to work in Sighthill.

"It was a wonderful community that they nourished by the preaching of the Gospel there for this last generation. They also worked in Heriot-Watt University as chaplains, and I saw for myself the exceptional work done there, on the subject on faith and science.

"Now however, due to their own internal circumstances, the Augustinians told me recently of their decision to withdraw from the diocese, and we will be the poorer for their absence, both as a body of men and as individuals, I know how much they have been appreciated and I can sense already that they will be missed."

The day featured Sister Mirjam Hugens, the Archdiocesan Director for Religious Vocations, discussing the various initiatives she has carried out to encourage more vocations to the religious life.

This has included collaborating with Father Andrew Garden, Vocations Director, to start a monthly Mass for Vocations and encouraging the laity to pray for more young people to answer the call of God to serve him in the priesthood and religious life.

Father Jamie Boyle, Vicar Episcopal for Clergy & Religious, said: "This annual event is a great way to bring together all our religious brothers and sisters to pray and enjoy a special day." 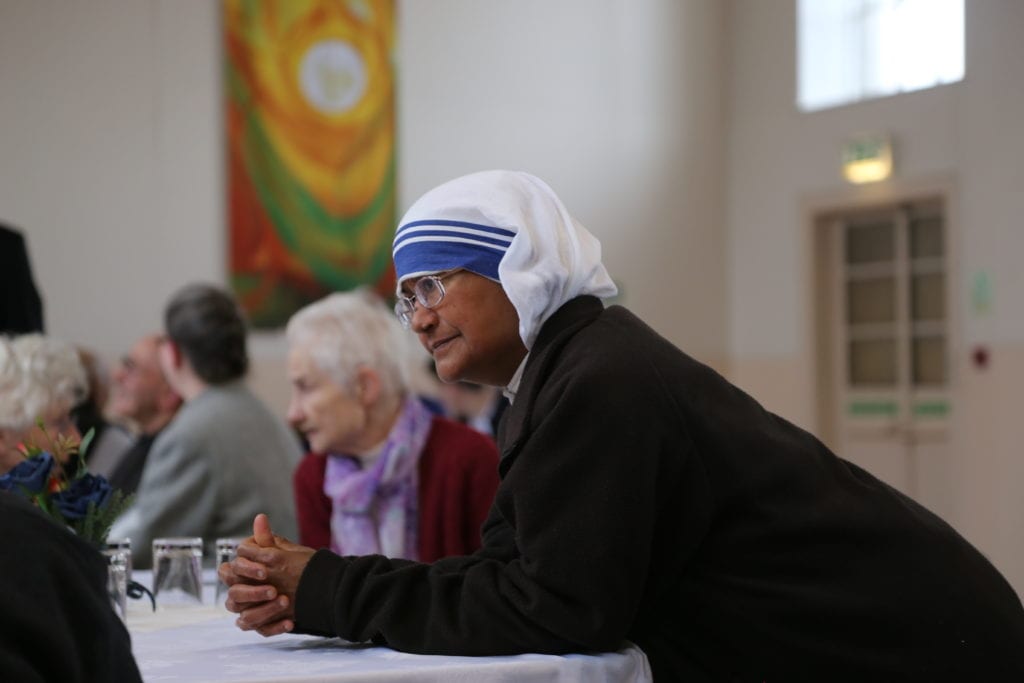 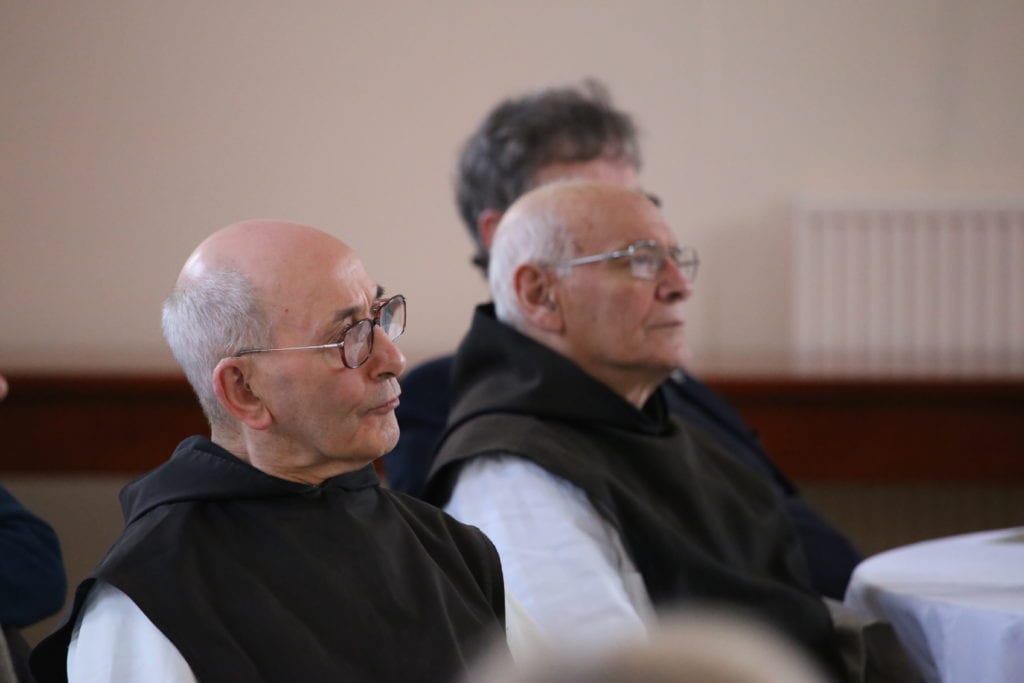 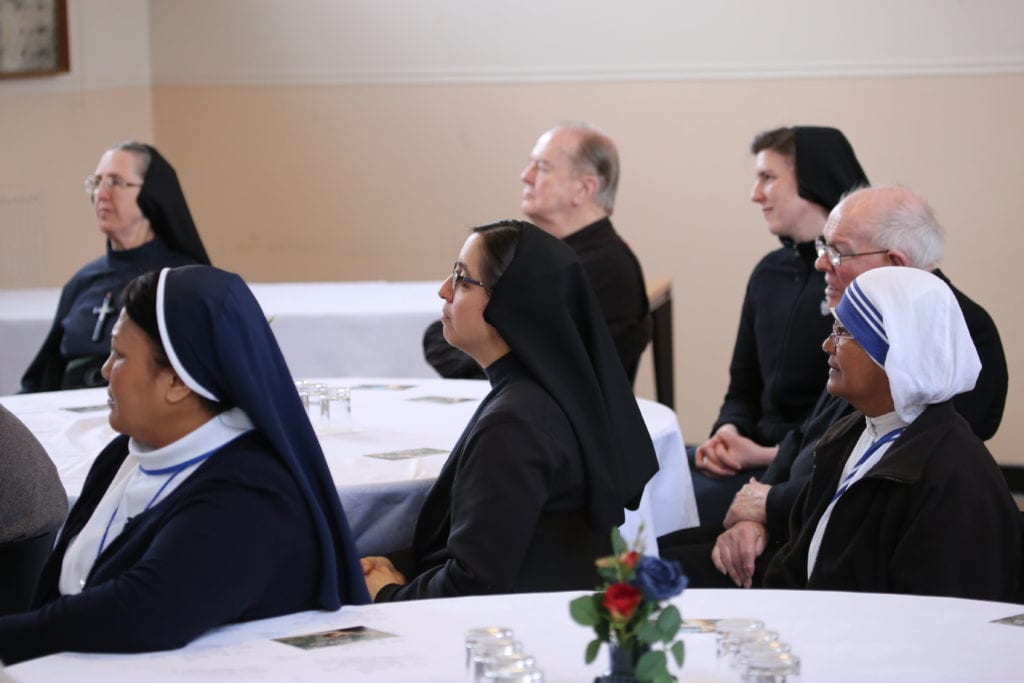 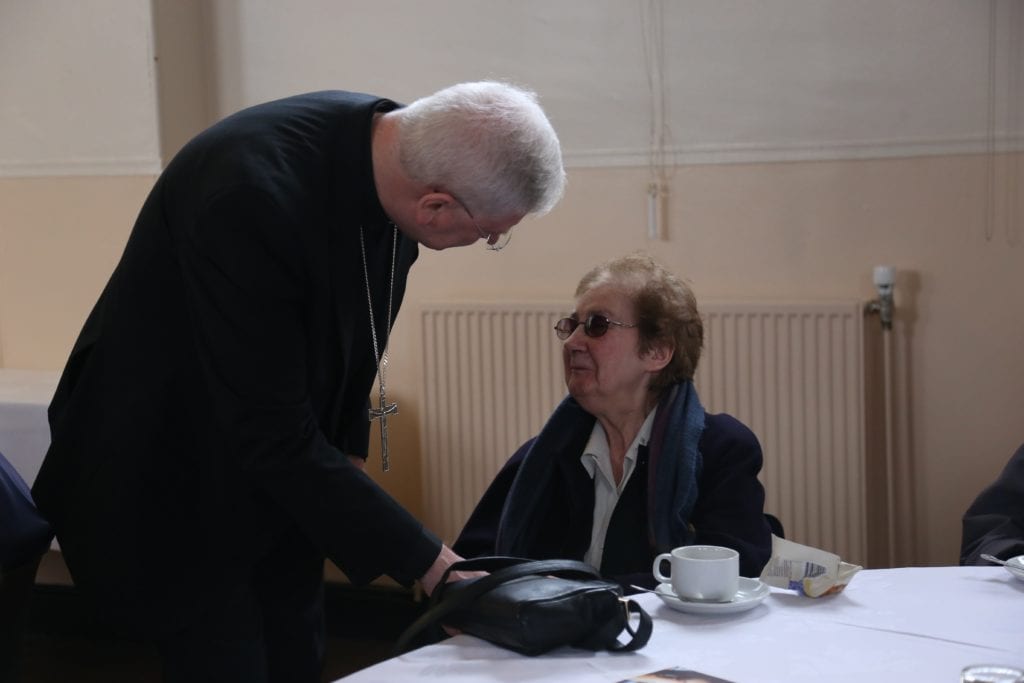 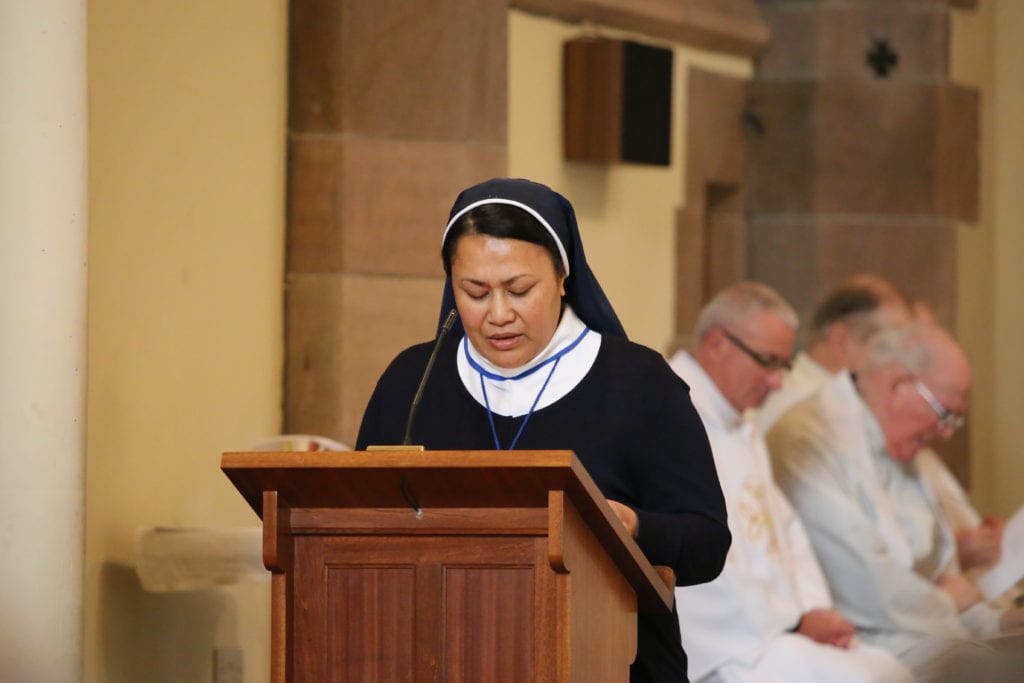 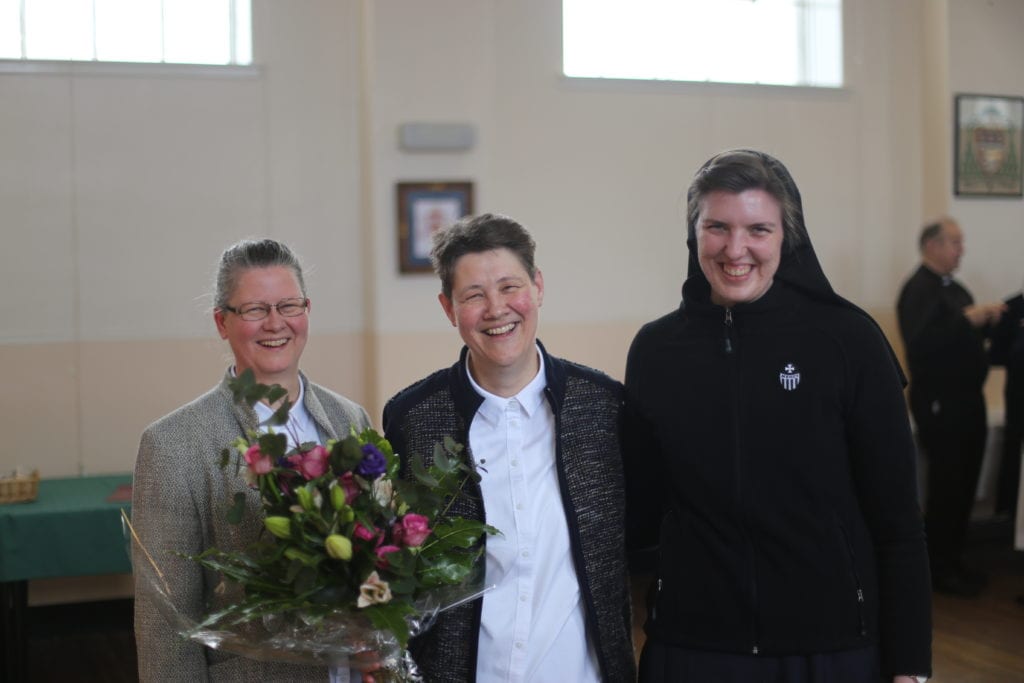 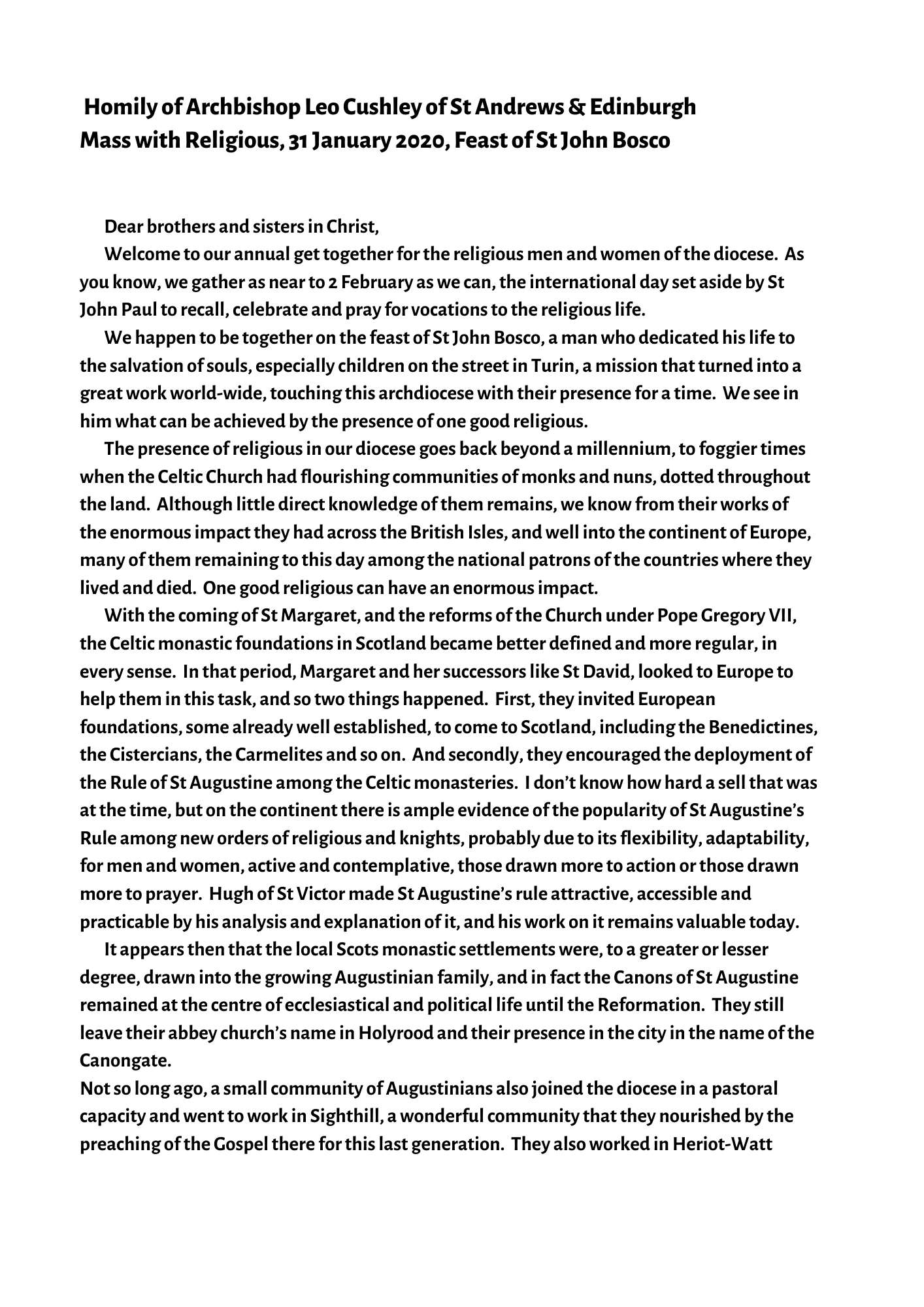 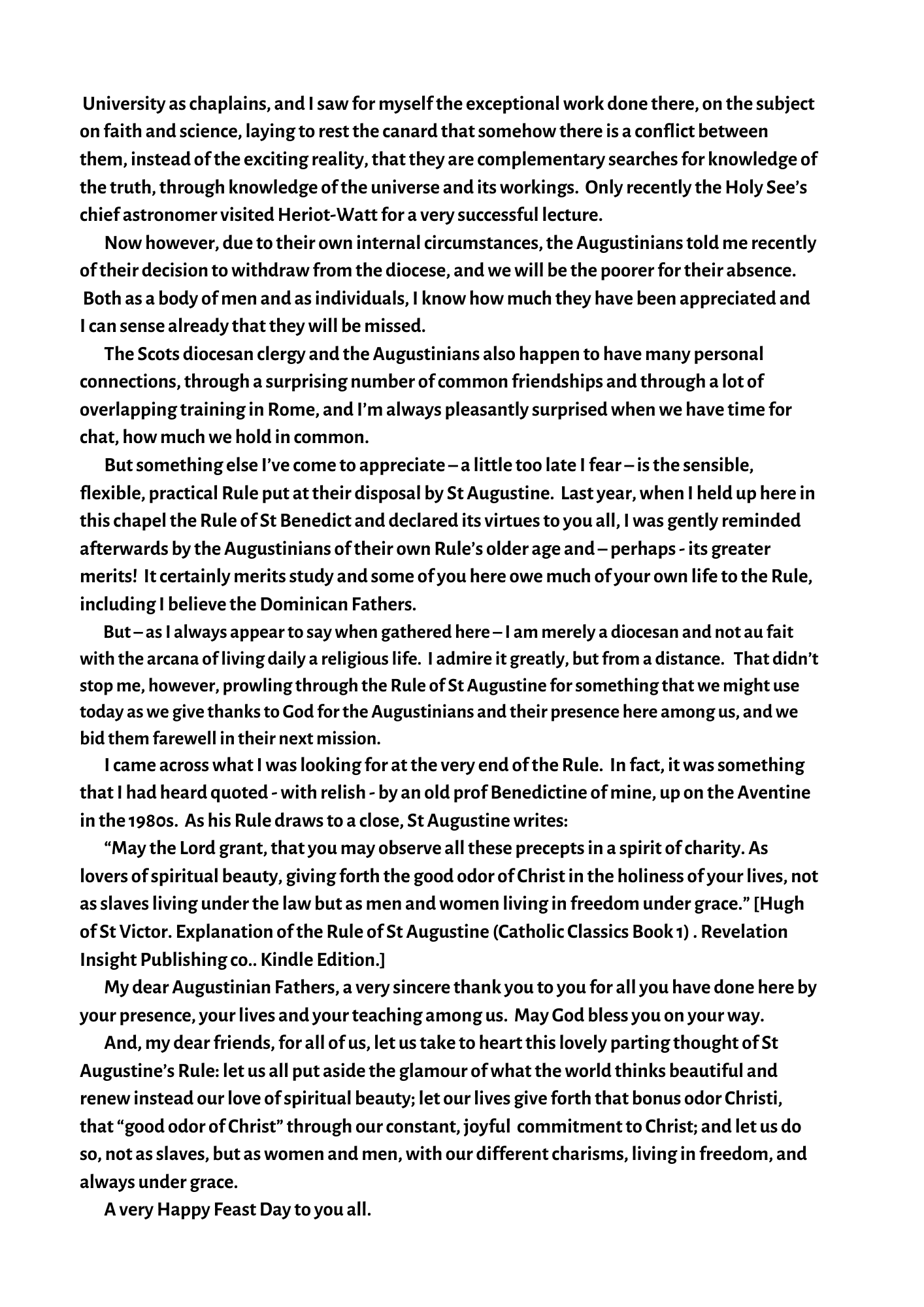