The Vatican’s Dicastery for the Clergy has appointed Fr Mark Cassidy as the next Rector of the Pontifical Scots College in Rome.

He is a priest of Dunkeld Diocese and was Spiritual Director of the college from 2011 to 2018.

He said: "I am aware of the trust that the bishops have expressed in nominating me as the next Rector of the College in Rome.

"I am aware of the vital importance of the seminary in the life of the Scottish Church and look forward to being involved once more in the formation of a new generation of priests for service in Scotland.

"Fr Dan and his predecessor Mgr John Hughes brought their own gifts and talents to the role of Rector, and I intend to do all I can to build on the good work that they did.”

Fr Dan was first appointed as vice-rector of the college in 2012 before being made rector in 2015. He is set to return to a parish in the Diocese of Paisley.

The new appointment was made following the recommendation of the Bishops Conference of Scotland (BCOS).

Bishop Hugh Gilbert, President of BCOS, said: "I wish Fr Mark every blessing in his new role, while extending our gratitude to the Diocese of Dunkeld for allowing him to serve the church nationally in such a crucial position. I wish him every success in his new and important responsibilities."

Congratulations to Paul Henderson and Peter Shankland who were instituted as Acolytes at the Beda College in Rome on Wednesday.

In this ministry they can assist the deacon and priest at the altar during Mass.

Both seminarians are parishioners from St Mary's Cathedral, Edinburgh. Please keep them in your prayers as they continue studying for the priesthood.

Six Scottish seminarians were instituted as Acolytes by Bishop Paul Tighe at the Scots College in Rome on Sunday. 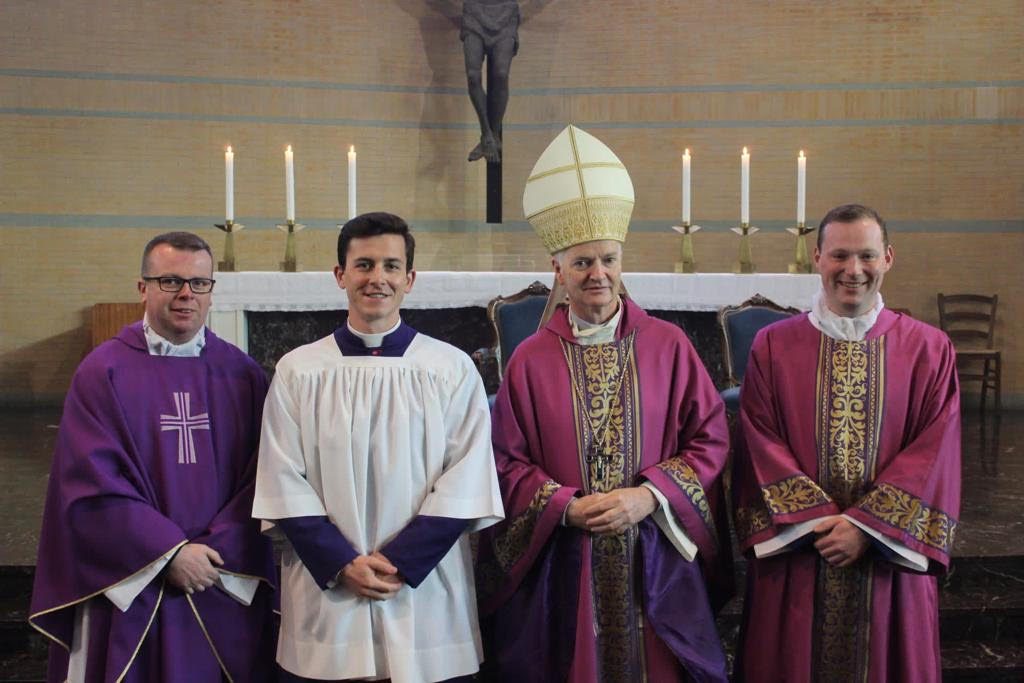 They include Alessio Marchetti (above, second left), a seminarian of the Archdiocese of St Andrews & Edinburgh, who is a fourth year student at the college. He is pictured with Fr Nick Welsh (left, vice rector of the Scots College and a priest of our Archdiocese) and Deacon Josh Moir (right, who is being ordained to the priesthood for our Archdiocese this summer).

Bishop Tighe, also pictured, is Secretary of the Pontifical Council for Culture. May God bless them on their journey to the Priesthood.

An acolyte is a milestone on the journey to priesthood, usually conferred in the fourth year of study at seminary. The next stage is diaconate, followed by ordination to the priesthood.

Four seminarians at the Pontifical Scots College in Rome were instituted to the ministry of Lector by Cardinal George Pell on Sunday.

They included Alessio Marchetti, a seminarian of our Archdiocese, along with Aidan Matheson (Aberdeen), Paul Laverty (Paisley) and Chris Furmage (Motherwell). Please keep them all in your prayers.

The Mass was streamed on YouTube and can be watched here. The life of a Scottish seminarian in Rome is revealed in a new three-part series on BBC Alba.

Priest School follows Ronald Campbell from Benbecula, who is in his final year studying for the priesthood at the Beda College in Rome.

It also features seminarians from the Archdiocese of St Andrews & Edinburgh as they study, pray and share life together in the Eternal City.

The highlight of the first episode is students and staff meeting Pope Francis at the Vatican. He tells them: "Don't forget to pray for me".

The next epsiodes are on Thursday 26th and Friday 27th December at 8:30pm. The first episode is available now on BBC iPlayer.