The pro-life campaign, 40 Days for Life, is currently holding peaceful public witnesses in the Archdiocese of St Andrews & Edinburgh in order to pray for an end to abortion. You will find them at:

Edinburgh: Chalmers Clinic, 2a Chalmers Street, Edinburgh, EH3 9ES. Contact the organiser for details of the vigil each day:  https://www.40daysforlife.com/en/edinburgh

All participants are asked to sign a statement of peace in which they pledge to conduct themselves in a Christ-like manner. For more information, contact Paul Atkin of the Archdiocesan Pro-Life Office at prolife@staned.org.uk.

Below is Archbishop Leo Cushley’s message of support to those taking part in 40 Days for Life 2022.

Later this month, on 22 October, the Church marks the Feast of Pope St John Paul II. Along with our present Holy Father Pope Francis, John Paul was a great advocate for the unborn and a defender of their right to life.

He wrote: “Christ needs you to enlighten the world and to show it the "path to life" (Psalm 16:11). The challenge is to make the Church’s "yes" to Life concrete and effective. The struggle will be long, and it needs each one of you. Place your intelligence, your talents, your enthusiasm, your compassion and your fortitude at the service of life!” (Homily on the Solemnity of the Assumption of the Blessed Virgin Mary, 1993).

It is out of love for mothers, unborn children, their families and the common good of wider society that many will quietly and peacefully provide daily witness as part of 40 Days for Life. I commend all who do so. I offer you my support. I assure you of my prayer. I give you my blessing.

Day for Life is the day in the Church’s year dedicated to raising awareness about the meaning and value of human life at every stage and in every condition.

The Church teaches that life is to be nurtured from conception to natural death. This year’s Day for Life is celebrated on 5 June in our Archdiocese.

Caring for the Older Person

The focus of the Day for Life this year is to support and protect people at the end of life.

“We invite people to think again about the value and worth of older persons in families, in society, and to make practical choices to build bridges between the generations.” - Rt Revd John Sherrington, UK Bishop for Life Issues

Pope Francis has recently offered a very different and more positive perspective. In his Catechesis on Old Age, he writes:

“The alliance between generations, which restores all ages of life to the human, is our lost gift and we have to get it back. It must be found, in this throwaway culture and in the culture of productivity.”

We invite people to think again about the value and worth of older persons in families, in society, and to make practical choices to build bridges between the generations. We call for people and parishes to devote quality time, energy and creativity in caring for the older persons in our communities.

We invite engagement in political debate on providing adequately resourced care of the older person so that no-one feels like a burden in our society.

We challenge our politicians and healthcare system to provide accessible palliative care for all the dying.

We encourage people to learn from a closer accompaniment of the elderly that there is a real richness in the journey through old age, which offers a deeper meaning and a new rhythm to the whole of life; something which can be celebrated and lived with hope in eternal life.

St. Joachim and St Anne, grandparents of Jesus, pray for us.

A special Day for Life collection will be taken in parishes on 5 June or donate direct:  https://bit.ly/archdayforlife

Find out the work of the Archdiocesan Pro-Life Office from Paul Atkin:  prolife@staned.org.uk or 0131 623 8917. The above article is an abridged version of this Day for Life article.

America could be on the brink of a major decision on abortion that could lead to the saving of millions of unborn children. What impact would it have on America and the rest of the world? Here we present some FAQs to help you understand what's happening.

What is Roe v Wade?
In 1973, Norma McCorvey (“Jane Roe”) challenged Texas’ law which prohibited doctors from performing abortions.  “Wade” was Henry Wade, the district attorney of Dallas. In the Roe vs Wade decision the Supreme Court decided that abortion was a ‘right’ found in the 14th amendment of the US Constitution.

What then happened?
The Roe decision struck down many State laws and made abortion a Federal issue in the United States.  The plaintiff, Norma McCorvey (“Jane Roe”)  eventually became a Catholic and campaigned against abortion.

What is the key legal point being argued?
The US Constitution does not refer to abortion, so the claim that there is a right to it, which was the foundation for the 1973 decision, has no basis in fact.

Why is it in the news?
This week media reports are suggesting the Court has decided that Roe will be overturned. This follows a leaked draft majority opinion that has been widely reported.

What does the Court say about Roe v Wade?
Justice Alito, in the leaked document, is reported to have written: “The Constitution makes no reference to abortion and no such right is implicitly protected”.

What else is he reported to have written?
He notes that “a right to abortion is not deeply rooted in the Nation’s history and traditions” and “Roe was on a collision course with the Constitution from the day it was decided”.   He concludes: “the Constitution does not confer a right to abortion.  Roe… must be overruled and the authority must be returned to the people and their elected representatives”.

So what will it mean?
If overturned, US abortion laws will be decided by individual states rather than at a Federal level.  This is consistent with Catholic social teaching and the principle of subsidiarity which holds that political decisions should be taken at a local level if possible, rather than by a central authority.

So that’s good for unborn children and their mothers?
Yes. States in the US that want to democratically pass pro-life laws would be able to do so and lives will be saved as a result.

This is happening in America, why should I care?
Because potentially millions of human lives will be saved from the horror of abortion. The impact of a decision to overturn Roe v Wade will be felt around the world.

How many abortions have taken place in the UK?
9,898,425 lives have been lost as a result of 54 years of legal abortion in the UK.

What about Scotland?
In Scotland, women from the poorest areas have abortion rates twice as high as those from wealthy areas. Being genuinely ‘pro-choice’ means supporting women who want to keep their children so they are not forced into abortion for economic reasons.

Has the First Minister commented on Roe v Wade? 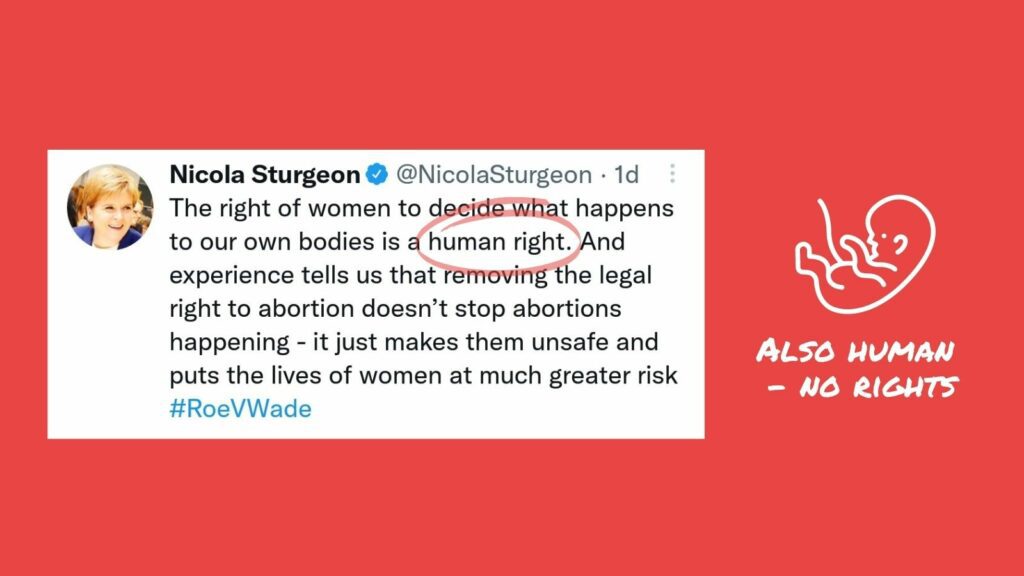 Nicola Sturgeon posted on Twitter: "The right of women to decide what happens to our own bodies is a human right. And experience tells us that removing the legal right to abortion doesn’t stop abortions happening - it just makes them unsafe and puts the lives of women at much greater risk."

Is she open to dialogue on the issue?
It doesn't appear so. The Society for the Protection of Unborn Children posted a Tweet showing she had blocked them on Twitter. 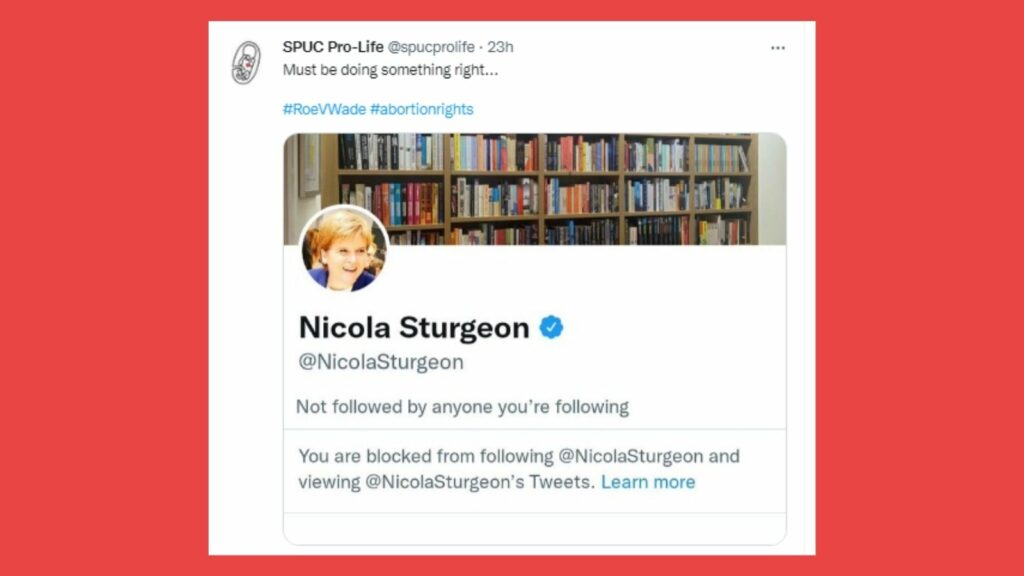 What is the Catholic teaching on abortion?
The Catechism of the Catholic Church states: "Human life must be respected and protected absolutely from the moment of conception" (2270) and "Since the first century the Church has affirmed the moral evil of every procured abortion." (2271).

What does Pope Francis say about abortion?
Speaking to media in 2021, he said: "Abortion is murder.. Those who carry out abortions kill. At the third week after conception, often even before the mother is aware (of being pregnant), all the organs are already (starting to develop). It is a human life. Period. And this human life has to be respected.." 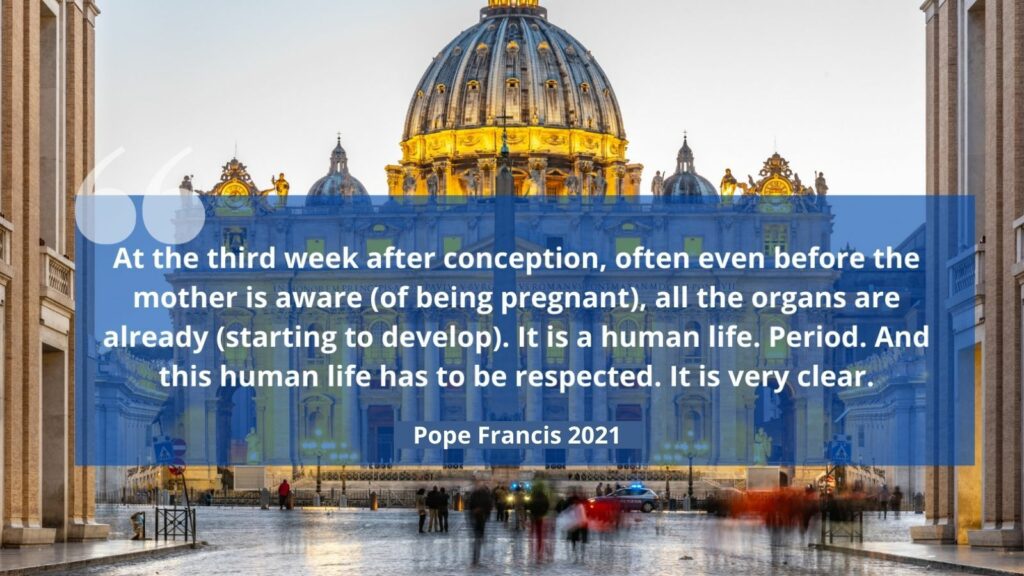 What pro-life work happens in our Archdiocese?
We have a pro-life office which helps provide real choices and support to women in unexpected pregnancy situations. Recently, Stanton Healthcare has been established in Edinburgh to give support to women facing a crisis pregnancy. Recently, the Society for the Protection of Unborn Children hosted it annual pro-life chain in Edinburgh. What can I do?
Catholic social teaching has always placed special emphasis on helping those in need. Caring for unborn children and their mothers follows Jesus’ instructions in St Matthew’s Gospel (see below). Please pray for an end to killing of the most vulnerable humans - the unborn.

Contact our Pro-Life Office
Could you help unborn children and their mothers in our Archdiocese? There are lots of different ways to help. Contact Paul Atkin at the Archdiocesan Pro-Life Office: 0131 623 8917 | prolife@staned.org.uk 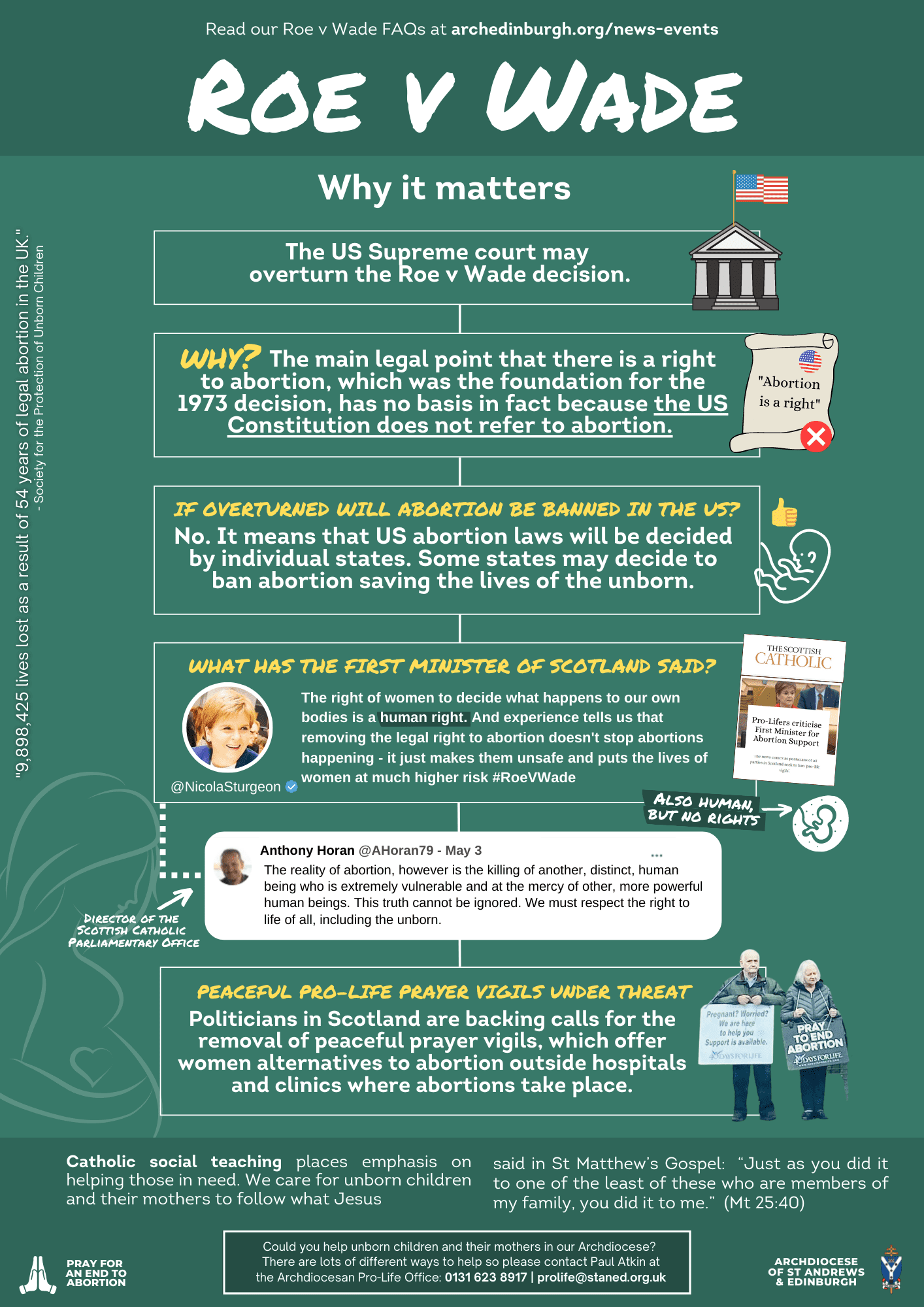 PDF version of above infographic here.

Join Archbishop Cushley to pray the Rosary for unborn children, their mothers and all pro-life intentions. Register on our Eventbrite page here.

This prayerful event marks the anniversary of the implementation of the Abortion Act in April, 1968. We'll remember all unborn children, mothers and families affected by abortion. We'll pray our society will bring about the day when no child is unwanted, no woman unloved and the pressures which lead abortion no longer exist.

This event precedes Scotland's national Pro-Life Chain which takes place on nearby Lothian Road at 11am.

Archbishop Cushley give a poignant reflection at the first online Stations of the Cross last night (Tuesday).

Watch the reflection below or on YouTube. Join us at 7:45pm each Tuesday in Lent to pray for the unborn, mothers and all pro-life intentions (30 min event). Register here.

Young adults from our Archdiocese were among a record number who attended the annual SPUC Youth and Student Conference in Staffordshire.

Over 200 delegates heard inspirational speeches and attended workshops to train the next generation of pro-life leaders to help build a culture of life in the UK. 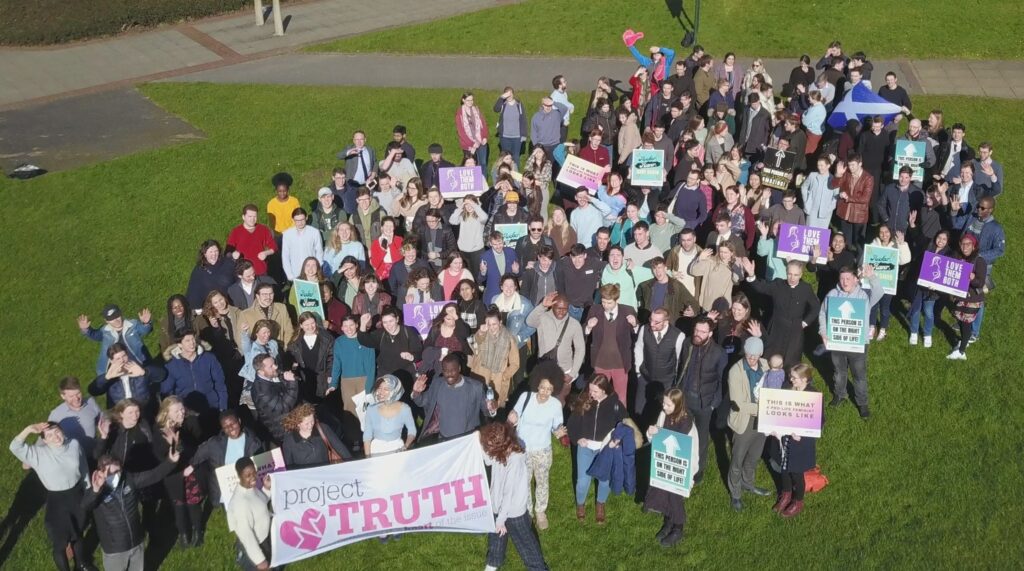 Clara Grace (title image, left), a student at St Andrew's, said: "The SPUC conference portrayed such a striking portrait of the intersection between compassion and Truth and invited us to stand shoulder to shoulder with them in the desire to bring life not only to babies but also women across the UK."

Hannah McNicol, president of St Andrew's Students for Life, said: The conference was fab, we learned loads and had a great time talking to everyone." 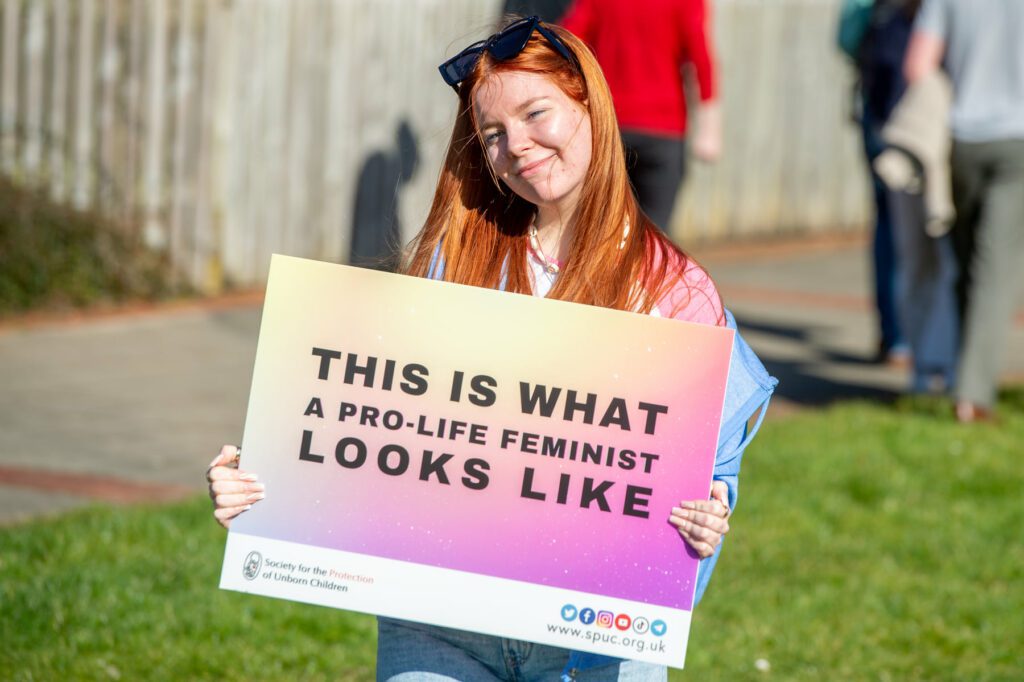 SPUC's Youth Conference is an annual event for young people across the UK. This year the conference was based on Three Pillars: to educate, inspire and empower.

The Archdiocesan Pro-Life Office builds a culture of life in our parishes, schools and universities. For Pro-Life information, resources and speakers contact Paul Atkin: prolife@staned.org.uk

Join us to pray the Stations of Cross for unborn children, their mothers and all pro-life intentions each Tuesday at 7:45pm throughout Lent. Reflection from Mgr Gerard Hand (Holy Cross, Edinburgh). Register on eventbrite here.

Join us to pray the Stations of Cross for unborn children, their mothers and all pro-life intentions each Tuesday at 7:45pm throughout Lent. Reflection from Fr Sebastian Thuruthippillil (St Barbara, Whitburn/Armadale). Register on eventbrite here.

Join us to pray the Stations of Cross for unborn children, their mothers and all pro-life intentions each Tuesday at 7:45pm throughout Lent. Reflection from Fr Michael John Galbraith (St James' Parish in St Andrews, Fife). Register on eventbrite here.

Join us to pray the Stations of Cross for unborn children, their mothers and all pro-life intentions each Tuesday at 7:45pm throughout Lent. Reflection from Deacon Tom McEvoy (Sacred Heart, Penicuik). Register on eventbrite here.