Plans to relocate the Pontifical Scots College in Rome have been backed by Pope Francis.

Archbishop Leo Cushley met with the Holy Father at the Vatican on Saturday to discuss the proposed move.

He said: “Pope Francis expressed his full support for the intentions of the Bishops’ Conference of Scotland to move the college into Rome city centre.

“I was delighted to hear that and I know my fellow bishops will be too.” 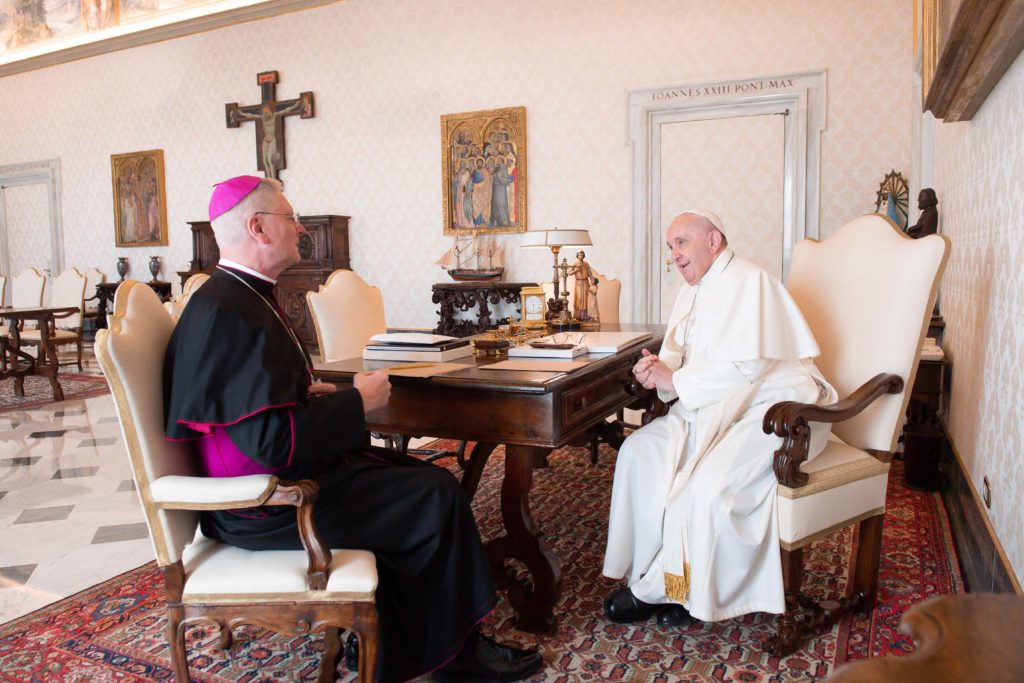 The decision to relocate the seminary, where young men in Scotland train for the priesthood, was announced in December after building upgrades were deemed too costly.

The college is currently on Via Cassia, around 10km from the city centre. The Bishops aim to sell the building and believe a more central location is the best option for the formation needs of the community and for future provision.

Archbishop Cushley added: “Saying goodbye, the Pope asked for our prayers, which I was happy to promise him on behalf of Scotland’s Catholics.

Archbishop Cushley is in Rome this week for the 50th anniversary of the council of European Bishops’ Conferences at the Plenary Assembly in the presence of Pope Francis.

A new Vice Rector has been announced today (Friday 12 June) for the Pontifical Scots College in Rome.

Fr Nick Welsh (36) was chosen for the post by the Bishops’ Conference of Scotland and is expected to begin the role at the national seminary in September.

He is currently parish priest at Our Lady and St Andrew, covering Galashiels, Melrose and Selkirk, and Vicar Episcopal for Education for the Archdiocese of St Andrews & Edinburgh.

Archbishop Leo Cushley said: “The Bishops thank Fr Nick for accepting this role and acknowledge the big change in having to leave his parish to move to Rome. I am confident he will do an excellent job in forming our seminarians. It’s both challenging and rewarding and when he returns our diocese will greatly benefit from his experience.”

Fr Nick attended the college as a seminarian between 2007-14 and has a licence in Theology.

He said: “To go back to Rome is certainly an exciting thing for me. I love being a priest and it is life-giving to be around people who want to be priests. I look forward to contributing to the formation of the seminarians and helping them become good priests."

In a message to parishioners on his parish Facebook page he added: "I have been administrator here in the Borders for only two years and had expected to be here much longer. I will certainly leave the Borders with a heavy heart, remembering always the warm welcome given me as well as all of the joyful moments that we have celebrated together these past years."

College rector Fr Daniel Fitzpatrick said: “We look forward to welcoming Fr Nick who will have a key role in the day-to-day running of the seminary and accompanying students as part of their formation.

“He succeeds Fr Stuart Parkes who gave us three years of service and enjoyed contributing to the life of the college. We wish him all the best on his return to the diocese of Motherwell.”

A new priest will be appointed to the Parish of Our Lady and St Andrew in due course.