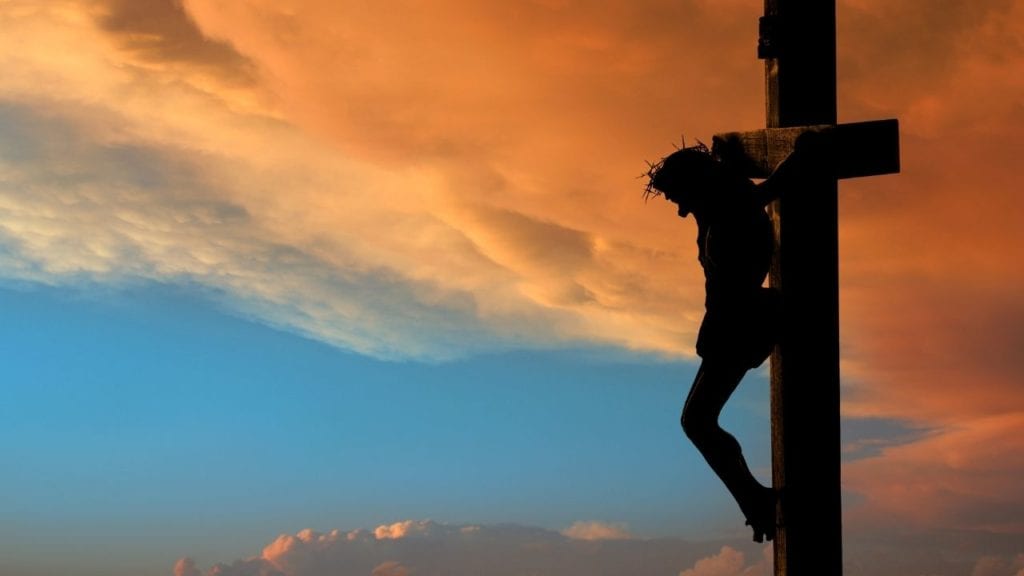 Here is Archbishop Leo Cushley's Homily for the celebration of the Lord's Passion, from St Mary's Cathedral Edinburgh.

Welcome to our celebration of the Lord’s Passion.

Today we look upon a church made stark and empty, to remind us of the desolation that we proclaim in the death of the Lord, and that we feel in our hearts as our Lord is taken away from us.

Last night, in His great mercy and love for us, the Lord anticipated this very absence by instituting the Eucharist as the everlasting memorial of His presence among us.  The Lord foretold His absence here, telling His disciples that, in spite of their objections, where we He was going, His followers could not follow.

Today that journey comes to its climax, and the absence from us of the Lord is complete, as we look upon His death on the Cross.

Not only that, to add to the sense of desolation, the eleven have fled. In St John’s account here today, only a few women remain.  The lonely figure of Our Blessed Lady, at the foot of the Cross, is supported only by St John.  In St Mark, it is left to someone who is not even a disciple, but a pagan soldier and one of Jesus’s executioners, to state not only the truth but the future faith of many: “Truly, this man was the Son of God”.

And, in the absence of the erstwhile loyal disciples of Jesus, two figures now come forward - Joseph of Arimathea and Nicodemus, who have been quietly and secretly growing in faith in the young rabbi from Nazareth - and, bravely and respectfully, ask for custody of Jesus’s body.  As they take it down from the Cross, their courage and affection is in stark contrast to the public and humiliating manner of Christ’s death, the disdain of the authorities, the dismay of the onlookers, the mockery of the thieves, the darkness over the land.

In St Mark’s version of this scene, which we listened to on Palm Sunday, the humanity, courage and suffering of Jesus are thrown into relief.   He is abandoned by everyone.  It is the bitter recollection of Peter, who then plays no further part in Mark’s Gospel, which he helped to write.

Peter will go on to tell the story of Passion somewhat against himself for the rest of his life, although he will also do so with a growing sense of having received the forgiveness of his friend, and a sense of pardon, of indebtedness and of renewed affection. But via Mark, Peter paints a dark and vivid scene of desolation at the foot of the cross, as he wishes us to see and feel how Jesus is abandoned and left alone by everyone at this supreme moment – and how much Peter lived to regret it.

Today’s Gospel, however, from St John, takes a more nuanced view.  Written just a few years later, we see the desolation, it is true; but we also see and sense the Son of God reigning from the tree.  Jesus, the divine Master, willingly and obediently, trustingly and even majestically, chooses to tread the terrible, but also the royal, path of our redemption.  It’s not that he doesn’t suffer humanly - he is true man – but the emphasis in John is surely upon the Son of God’s sovereign decision to submit to everything, all for love of us.

Throughout today’s Passion, the nobility of Jesus’s words, his looks, his gestures, speak of a divine compassion and forgiveness bestowed on all, especially upon those who insult him, who betray him, who nail him to the cross.

It then starts to become clear why Peter wishes to tell the story of the Passion against himself.  In an attitude not unlike St Paul’s, he wishes to show us that he is the least of all disciples; he wishes us to see that even the disciples who are supposedly the closest to the Lord can fail; even those who have given themselves completely to him can betray him.  He counts himself among the worst offenders, in order to be forgiven all the more.  Surely an example for us all.

But while Peter demonstrates this by telling the story, warts and all, of his own utter failure to stand by his friend, by means of emphasizing Jesus’s humanity; and while John dwells on Christ’s divinity and his own loyalty and constant friendship for the Lord, even to the foot of the cross - both disciples wish to bring us to the same point: that Jesus died for all of us, and that none of us is without the need of the redemption, the forgiveness and the love of the Lord.

We may tell the story of our Christian discipleship against ourselves, and see it as one of failure; or we may characterize our discipleship of the Lord as one of a quiet and constant friendship.  Either way, Christ our crucified Lord and his Cross must be at the centre of our life.

Neither we, nor any other pride or vanity or excuse, must take their place.  And let us recall with quiet and confident hope that the desolation we feel today will soon be transformed into victory and great joy, in the radiant, life-giving presence of the risen Lord among us.

« WATCH: Friday of the Passion of the Lord
He is risen! Archbishop Cushley's Easter message »