He was born on 06 August 1958 and baptised at St Margaret’s in Loanhead. He studied for the priesthood at the Pontifical Beda College in Rome and was ordained at Our Lady’s in Currie in 2000.

This year marked the 20th anniversary of his ordination. In a Mass of Thanksgiving at Our Lady of Loretto church in Musselburgh Fr Purcell spoke openly of his addiction issues and his deep love and thanks to God.

He said: “The more I’m around and trying to stay in recovery a day at a time I do realise better what St Paul’s words essentially mean – that love is the greatest of the virtues. So it’s in love and thanksgiving that I offer up this Mass…I thank Him deeply for these 20 years.” 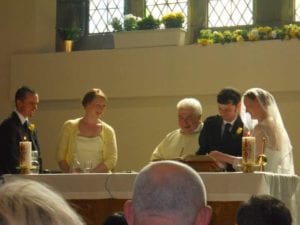 Andy McColl and Jill Hardy were married by Fr Hugh in 2011. He is greatly missed by them.

In July last year he had moved to the parish house in Musselburgh, a placed he “loved”. There he received support and friendship from parish priest Fr Basil Clark, who studied at the Beda College with him.

Fr Basil said: “I will miss his humour and earthy goodness. He was enormously kind and compassionate, especially to people with addiction problems - he was willing to travel miles for them.”

Fr Hugh was well known across the Archdiocese having served in parishes in the Borders, East Lothian and Edinburgh.

Archbishop Cushley said: “My sincere condolences go to the family and friends of Fr Hugh. The Archdiocese and many of the clergy, laity and friends, especially in these last months, endeavoured to assist him with his problems about which he was very honest, and I’m very grateful to all of them. May he rest in peace.”

Tributes flooded onto our Facebook page this morning (Wednesday 07 Oct) when we announced the news.

Silvia Maccagnano said: “Fr Hugh held a special place in my family’s heart. He was so good to my parents during his time at St Mary’s Cathedral. RIP and heartfelt condolences to his family and friends.”

Sally Flowers posted: “Rest in peace Father. He was such a lovely man. We were blessed to have him at St Mary’s for a while. I loved his homilies and he said Mass so beautifully. Now he’s in his true home.”

Fr Hugh is survived by a brother and two sisters.