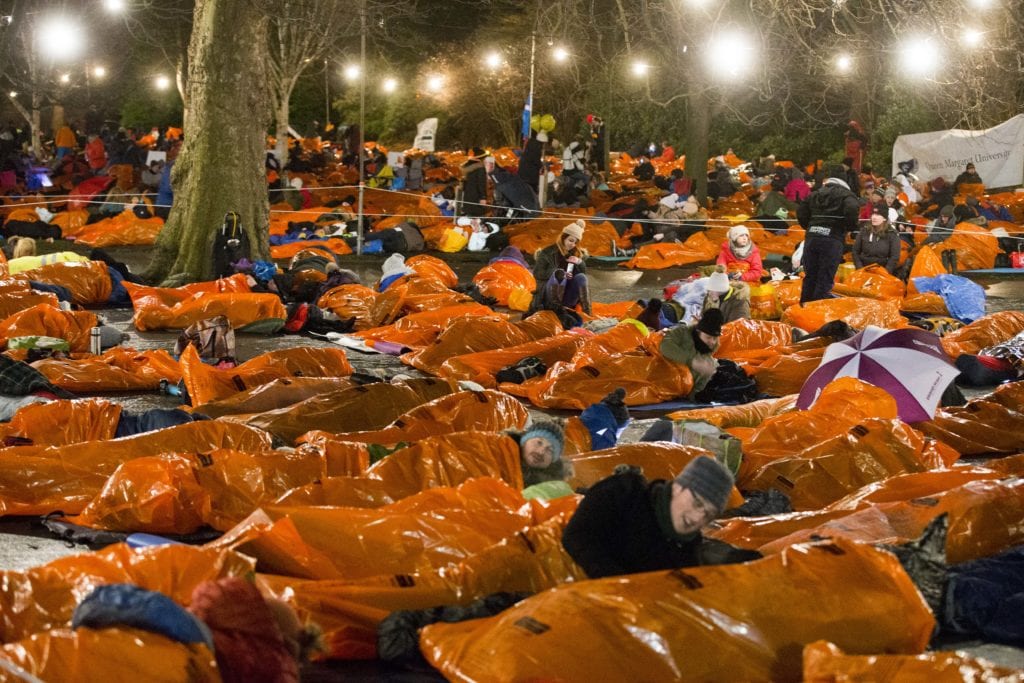 Pupils and parishioners hit the street for World's Big Sleep Out

Pupils from across the Archdiocese will sleep on the street in Edinburgh this Saturday night to highlight the plight of the homeless.

A team from the Dunfermline-based high school have teamed up with nearby Woodmill HS to take part in The World’s Big Sleep Out in West Princes Street Gardens.

Led by teacher Rhuraih Mulholland, they are among the top 10 team fundraisers for the event with their total currently (3rd December) now over an impressive £4,500.

On their virginmoneygiving page pupils state: "St Columba's and Woodmill were the top two fundraising schools for 'Sleep In The Park' events in 2017 and 2018.

"This is amazing, considering the two schools are so close, but now the S6 Students are even closer! Since the devastating fire in the Woodmill DAS Unit - the school's S6 Cohort have followed the timetable at St Columba's so it made perfect sense for the two groups to  stand shoulder to shoulder in the "World's Big Sleep Out" 2019."

Leaders from different faiths in Scotland, united by the moral injustice of homelessness, have lent their support to they event and are encouraging members of their communities to take part.

Edinburgh. We need you.
Join us one month today in Princes Street Gardens for the World's Big Sleep Out.
Sign up now ? https://t.co/uwKwF5YXM3 pic.twitter.com/Fv28Oug22y

They include Father Basil Clark, of Caritas, Justice & Peace in the Archdiocese of St Andrews & Edinburgh. He said: “Life without the security and shelter of a decent home can break the human spirit, destroy family life and has the capacity to lead to further social evils.

The World’s Big Sleep Out raises our awareness of this terrible issue. A tragedy which demands of us both compassion and creative determination to challenge those in authority - and ourselves - to prioritise the poorest and most vulnerable in society.”

Through their leadership of faith communities, they represent hundreds of thousands of people in Scotland and have put their support behind the movement, encouraging members of their communities to take part in the fundraising.

The World’s Big Sleep Out has its roots in Scotland, with the first sleep out in Edinburgh in 2016 organised by Social Bite’s co-founder Josh Littlejohn MBE (see above video).

He said: "It’s uplifting to see the faith leaders of Scotland coming together. To tackle homelessness, we need operate collectively, with each faith community bringing its passion for social justice and social capital. The World’s Big Sleep Out has its inspiration in Scotland, so it’s fantastic to have the support of its faith leaders.”

Also taking part are parishioners from St Mary's Cathedral in Edinburgh, Maggie Paterson, Margaret Halloran and James Walker, who have raised over £3,000. Find out more at their virginmoneygiving page.

« Available now: children's liturgy guide for Second Sunday of Advent
Q&A: My journey to the priesthood »