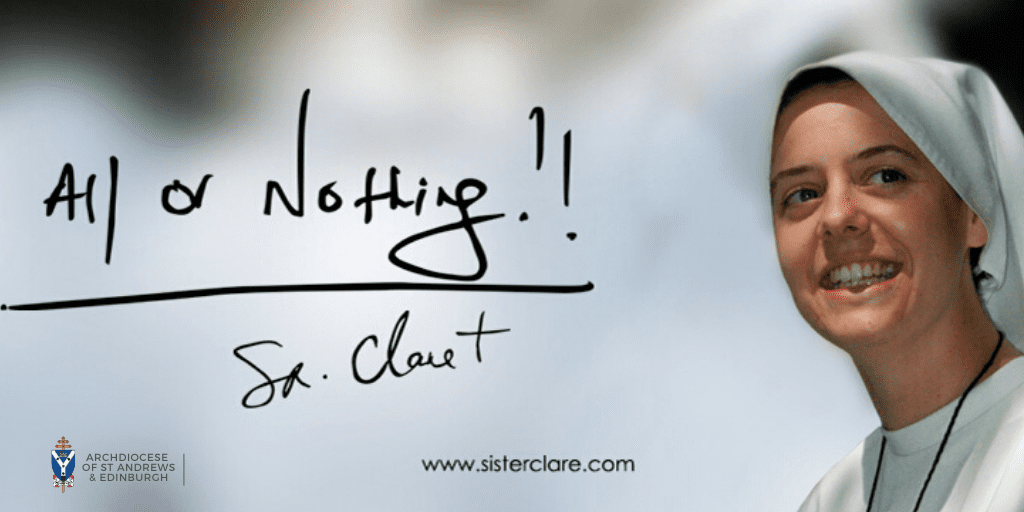 SCREENING: Sister Clare, the 'party animal' who became a nun

Women across the Archdiocese are invited to a screening of the inspiring story of a former 'party animal' who became a nun.

Clare Crockett gave up the opportunity of a career in acting and the road to fame to give her life to God before her death, aged just 33, in an earthquake in Ecuador in 2016.

Thanks to the Servant Sisters’ archives, with over 15 years of photos and videos of Sister Clare’s life, 'All or Nothing' shows her real-life story.

HIGHLY recommend watching the documentary film on Sr. Clare Crockett’s life - I was impressed and very moved. The hype is deserved. pic.twitter.com/p3K8TheWDA

In her own vocation story, she wrote: "I got my first television job on Channel 4  when I was fifteen years old. It was a program called 'Get With It!'. When I was sixteen, I was invited to be a host on a big channel called “Nickelodeon.”

"In the acting world, sin is glorified and it is awful. My friends were all living like this – in mortal sin. They liked to drink, smoke, go out with guys, disobey their parents... They were living badly and so was I."

She recalled a startling encounter when she was on a night out with friends: "While I was in a club, I strongly felt the gaze of the Lord on me while I was in a bathroom cubicle, about to get sick.  I drank so much that I lost control.

?TRAILER: All or Nothing: Sr Clare Crockett.

The inspiring story of the former party animal who became a nun.

"I strongly felt the gaze of the Lord on me. I felt it so strongly that, at first, I thought that one of my friends was in the other cubicle standing on the toilet, looking at me to see if I was okay or not. The gaze was so intense. And immediately I heard the voice of the Lord inside of me say, "Why do you keep wounding Me?"

In the documentary, those who knew the Irish nun speak about her character, joy and her legacy in her religious life.

Sister Mirjam Hugens, Vocations Director for Religious Life in the Archdiocese of St Andrews & Edinburgh, said: "The story of Sister Crockett is fascinating and I know many people have found this film inspiring. She had lots of opportunities in life, such as an acting career, but that all changed because she heard the call of God.

"This film shows how life in a religious community is joyful - that's certainly been my experience and I want to share that with young Catholics in our Archdiocese."