This year is the 25th anniversary of Vita Consecrata, an apostolic exhortation written by St John Paul II on the religious life. We asked Fr Nicholas Grace IVE, who lives the consecrated life as a priest of the Institute of the Incarnate Word (based at Holy Family Parish, Cowdenbeath and Kelty), to highlight and explain some key quotes from the document...

"The characteristic features of Jesus — the chaste, poor and obedient one — are made constantly visible in the midst of the world…The consecrated life truly constitutes a memorial of Jesus' way of living and acting...a living tradition of the Saviour's life and message.”

This quote is from the introduction to Vita Consecrata and offers a simple definition on the Consecrated life. We vow to live our lives following Christ, living in chastity, poverty, and obedience.

"The evangelical counsels (poverty, chastity, obedience) should not be considered as a denial of the values inherent in sexuality, in the legitimate desire to possess material goods or to make decisions for oneself…The profession of chastity, poverty and obedience is a warning not to underestimate the wound of original sin and, while affirming the value of created goods, it relativizes them by pointing to God as the absolute good."

The modern world is mortified by Religious who choose to live a lifestyle so different, so countercultural, so contrary to what is deemed the norm. It’s one that is chaste and which eschews material goods as we seek better to imitate Christ. Here the Pope anticipates the sentiment of the modern world. 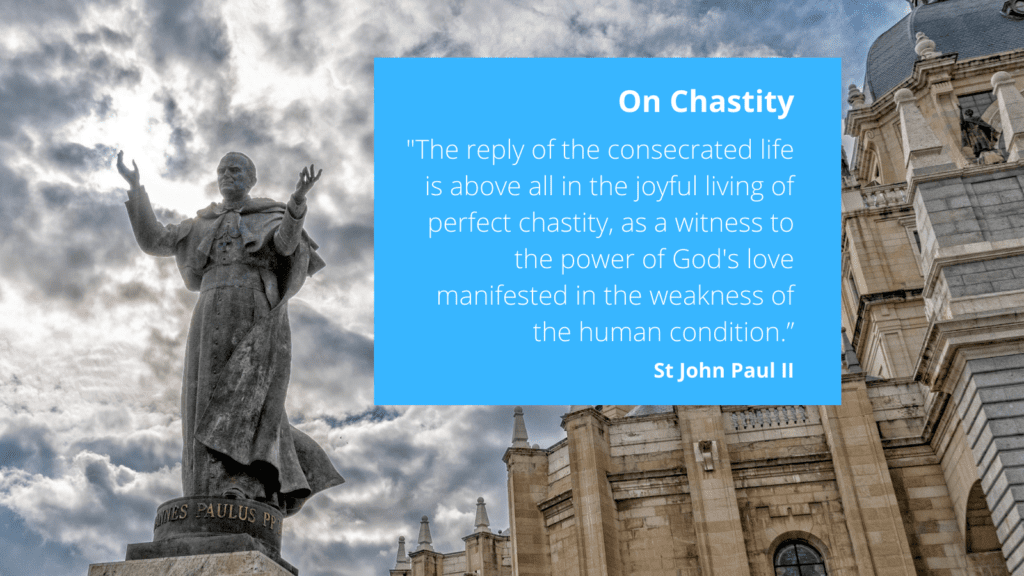 "The first challenge is that of a hedonistic culture which separates sexuality from all objective moral norms, often treating it as a mere diversion and a consumer good and, with the complicity of the means of social communication... The consequences of this are before everyone's eyes: The reply of the consecrated life is above all in the joyful living of perfect chastity, as a witness to the power of God's love manifested in the weakness of the human condition.”

Now the Saintly Pope had a very acute perception of the spirit of the times and the problems it poses. He suggests how the vow of chastity works as what we might describe as a remedy for the modern world.

"Another challenge today is that of a materialism which craves possessions, heedless of the needs and sufferings of the weakest, and lacking any concern for the balance of natural resources. The reply of the consecrated life is found in the profession of evangelical poverty, (which) recalls the first of the Beatitudes in the imitation of the poor Christ. Its primary meaning, in fact, is to attest that God is the true wealth of the human heart…This witness will of course be accompanied by a preferential love for the poor.”

What I like about Pope John Paul in this document is that he makes it very clear that the efficacy of consecrated persons in working with the poor has far more to do with their being able to identify with the poor, that is, adopting a simple and austere way of life, both as individuals and as a community. He calls this living witness.

"... who does not see the aberrant consequences of injustice and even violence, in the life of individuals and of peoples, to which the distorted use of freedom leads? An effective response to this situation is the obedience which marks the consecrated life.”

A consecrated person who submits their liberty and their lives, not only to God in an almost abstract way, but also in a visible and concrete way to those who act in the place of God, namely their Superiors, gives proof that there is something wrong with the modern concept of 'freedom'. I say this because too many young people seem to enslave themselves by indulging an unrestrained freedom, even to the point of sin, making the warning of Jesus Christ self evident.  On the other hand, countless Religious living a joyful obedience, by choice and in true freedom, give living testimony to the promise of the same Saviour.

“If you remain in my word, you will truly be my disciples, and you will know the truth, and the truth will set you free.” They answered him, “We are descendants of Abraham and have never been enslaved... Jesus answered them, “Amen, amen, I say to you, everyone who commits sin is a slave of sin." 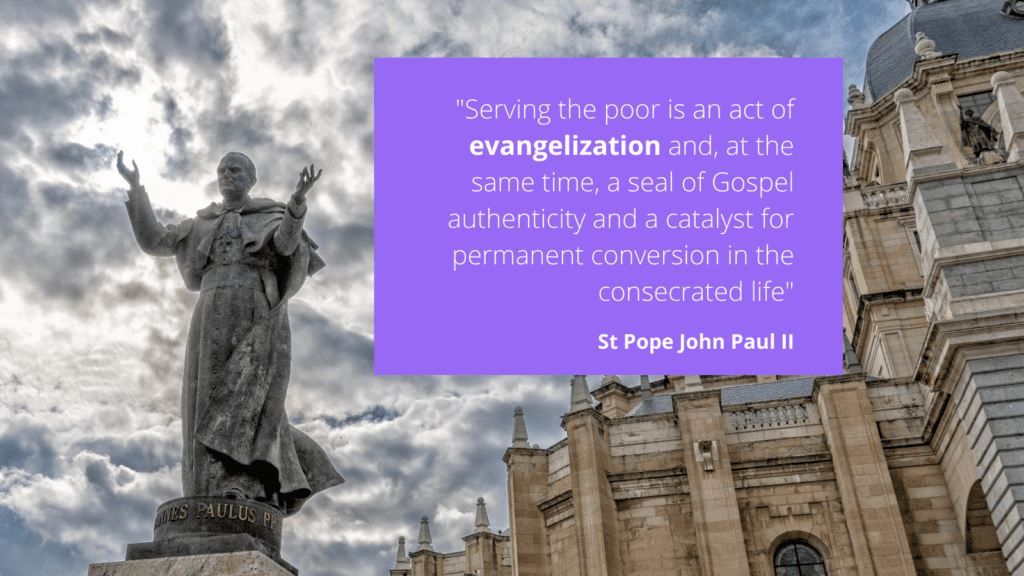 "Serving the poor is an act of evangelization and, at the same time, a seal of Gospel authenticity and a catalyst for permanent conversion in the consecrated life"

This quote is about action being more important than words - authentic action that wins hearts for Christ. Consecrated persons become consecrated for this reason and no other, certainly not the praise or esteem of men! Public figures, even some church leaders and clergy talk about helping the poor, caring for the poor, loving the poor. But too often it seems like virtue signalling and headline grabbing ambition. The consecrated witness is a remedy to this superficial and cheap practice, which shows itself ever more in need of Evangelization.

"... Supported by the charism of their founders and foundresses, many consecrated persons have been able to approach cultures other than their own with the attitude of Jesus, who "emptied himself, taking the form of a servant" (Phil 2:7)…In this sense the consecrated life makes its members particularly well suited... because it accustoms them to being detached from things, even from many features of their own culture... (Furthermore) the consecrated life itself is the bearer of Gospel values and, where it is authentically lived, it can... serve as a Gospel leaven within a culture, purifying and perfecting it."

It must be stated here that that the Pope makes the proclamation of Christ the permanent priority of our mission. Now this priority, which we might call the Evangelic effectiveness of the consecrated person, is intimately linked to the fidelity to their vows, the charism of their institutes and what John Paul calls the preference for the poor and the sick.

Evangelization of the Culture

"Institutes of Consecrated Life have always had great influence in the formation and transmission of culture. This was true in the Middle Ages, when monasteries became places for the study of the cultural riches of the past, and for the development of a new humanistic and Christian culture. The same has happened every time the light of the Gospel has spread to new nations and peoples. (Today,) by their proclamation of the word of God, they (consecrated persons) too are called to discover the methods most suited to the needs of the different social groups and various professional categories, so that the light of Christ will penetrate all sectors of society and the leaven of salvation will transform society from within, fostering the growth of a culture imbued with Gospel values."

If consecrated persons are to imbue the culture with Gospel values, they must be careful in their efforts to change the society, and not rather be changed by it. To be in the world but not of the world. St John Paul teaches that this is greatly facilitated by a word he repeatedly refers to throughout the document, namely, Faithfulness. Faithfulness to the vows and faithfulness to the Charism of the Institute in which those vows have been taken. But what does St. John Paul mean by fidelity to the Charism?

" fidelity to the... spiritual heritage of each Institute... to the inspiration of the founders and foundresses... every charism leads to the Holy Spirit, insofar as it prepares individuals to... be guided and... to be conformed to Christ, to give witness to some aspect of his mystery. This is meant to take shape and develop according to the most authentic tradition of the Institute, as present in its Rule, Constitutions and Statutes.

If you have an inkling that perhaps the Lord may be calling you or someone you know to the consecrated life encourage them to read Vita Consacrata - a beautiful, deep and enriching document. Learn more about the fantastic gift that consecrated persons offer to the whole world.

« Tuesday: Watch Bobby Taylor being ordained a priest
Children's Liturgy at Home - Get ready for Sunday »