40 Days for Life vigil in Edinburgh: peaceful and prayerful

Police Scotland has confirmed there are no records of anti-social behavior by pro-life groups at vigils in Edinburgh.

The peaceful 40 Days for Life vigil, which has been held next to the Chalmers abortion clinic, comes to an end tomorrow (Sunday) with a candlelight prayer vigil.

In a response to a Freedom of Information (FOI) request, Police Scotland states “there were no incidents”, while NHS Lothian confirms there were “no adverse events” relating to any groups at the Chalmers Sexual Health Centre in Chalmers Street.

This response is consistent with multiple FOI responses by the Police and NHS Lothian who have repeatedly confirmed they have no records of any intimidation or harassment at pro-life vigils. Those taking part in the 40 Days for Life vigil must sign a peace statement. to take part.

Recently, local MP Tommy Sheppard tweeted that two people attending a 40 Days for Life vigil at Chalmers Street were "attempting to intimidate woman (sic)". An image in the tweet shows a woman holding a placard with 'Bye baby' written on it. The tweet (below) has since been deleted. 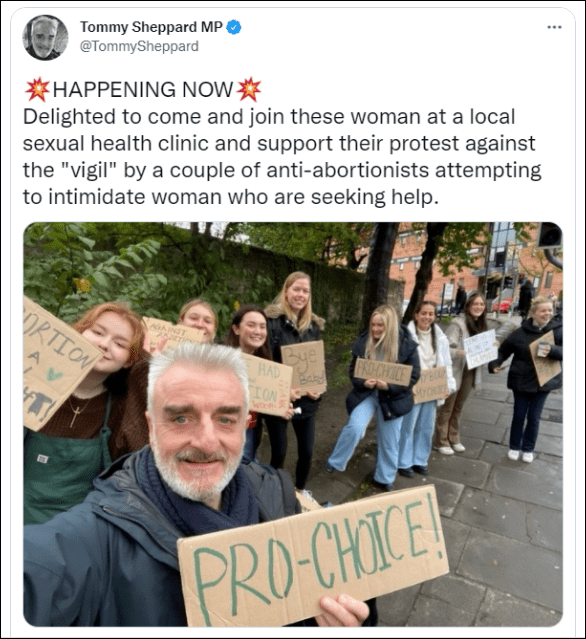 "Police and NHS incident management systems are reliable and credible sources of information which have, again, confirmed there are no records of any incidents relating to pro-life vigils.

"A prayer vigil is a very restrained response to Edinburgh’s Chalmers clinic which last year,was responsible for over 2,000 abortions, a 25% increase on the previous year."

He added: "Now is not the time to ban offers of help to vulnerable women, many of whom are from the most deprived areas of Scotland. Women in difficult circumstances may feel that abortion is the only choice available to them.

"Pro-Life vigils offer alternatives including help with baby equipment, materials, benefits advice, accommodation and whatever a woman needs, for as long as she needs it, including after birth.

"Scotland doesn’t need more abortion – we need a proper national debate about how to humanely support women with unexpected pregnancies."