Archbishop Leo Cushley has addressed the General Assembly on the historic St Margaret's Declaration between the Church of Scotland the Catholic Church in Scotland.

The statement of friendship between the churches has grown in parishes and between church members over 40 years of shared work and prayer. 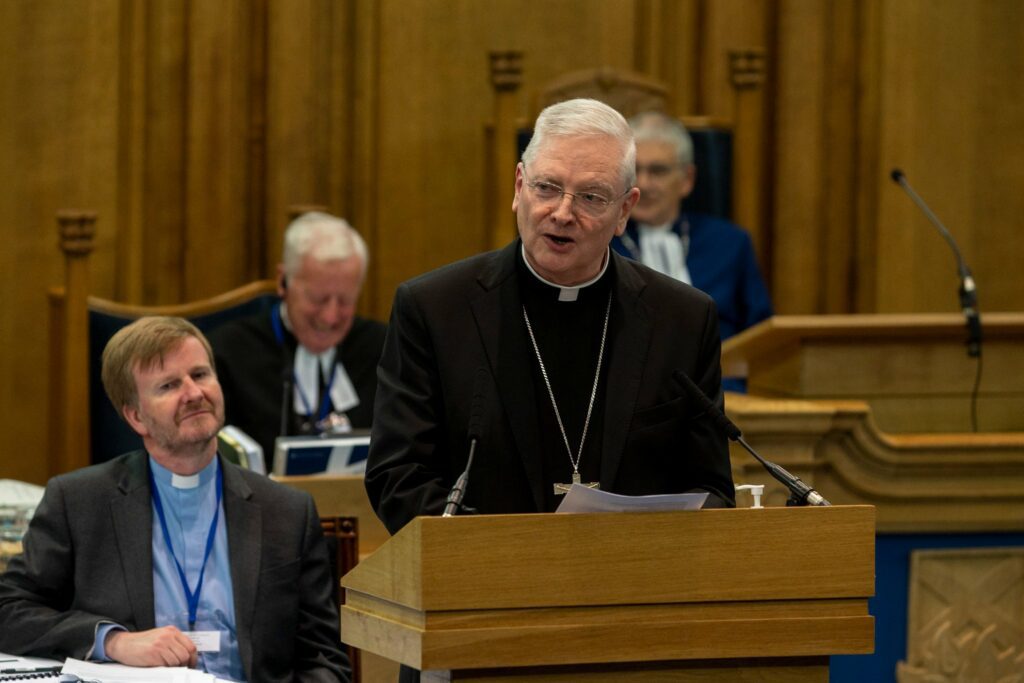 Archbishop Leo Cushley gives his address to the General Assembly in Edinburgh (image: Church of Scotland).

He said: "The Declaration is also a consciously new approach to ecumenism, an attempt to re-imagine the path of Christian unity."

He continued: "Instead of listing our problems and points of friction or grievance, old or new, the Declaration chooses to focus on what we have in common, and to underline that we treasure and hold, together, so much that is inspiring, ancient and profound.

The St Margaret’s Declaration is a unique & historic statement of friendship between the Scottish Catholic Church and the @churchscotland.

I was honoured to speak about it at this week’s General Assembly. Thanks to Dr Iain Greenshields and all at the GA for receiving it warmly. pic.twitter.com/xCmlRuDFKV

"Do I expect our two old institutions to be perfectly aligned and united any time soon? I suspect that may be a task for another generation.

Nevertheless, I believe that by acknowledging all the good that we hold in common, we can walk and pray together as friends, deepen our affective unity, and be a more authentic Christian witness in the land. The rest will come in God's good time." 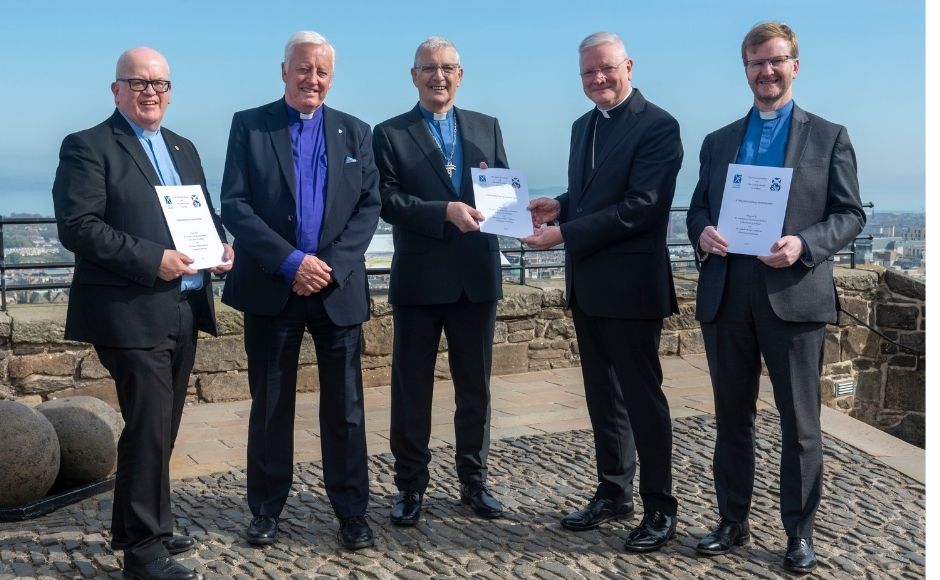 The declaration of friendship offers "a decisive and irrevocable statement of our friendship with one another, based on our shared faith in Christ".

Recently The Right Rev Dr Iain Greenshields and Archbishop Cushley talked about the declaration at St Margaret's Chapel at Edinburgh Castle (watch below or on YouTube.

Already approved by the Bishops Conference of the Catholic Church in Scotland, the declaration is the culmination of more than 100 years of dialogue and emphasises the shared faith and common ground that unites the Churches.

Archbishop Leo Cushley accepted the name suggestion on behalf of the Scottish Catholic Bishop's Conference, saying he has always had a special admiration for Saint Margaret. 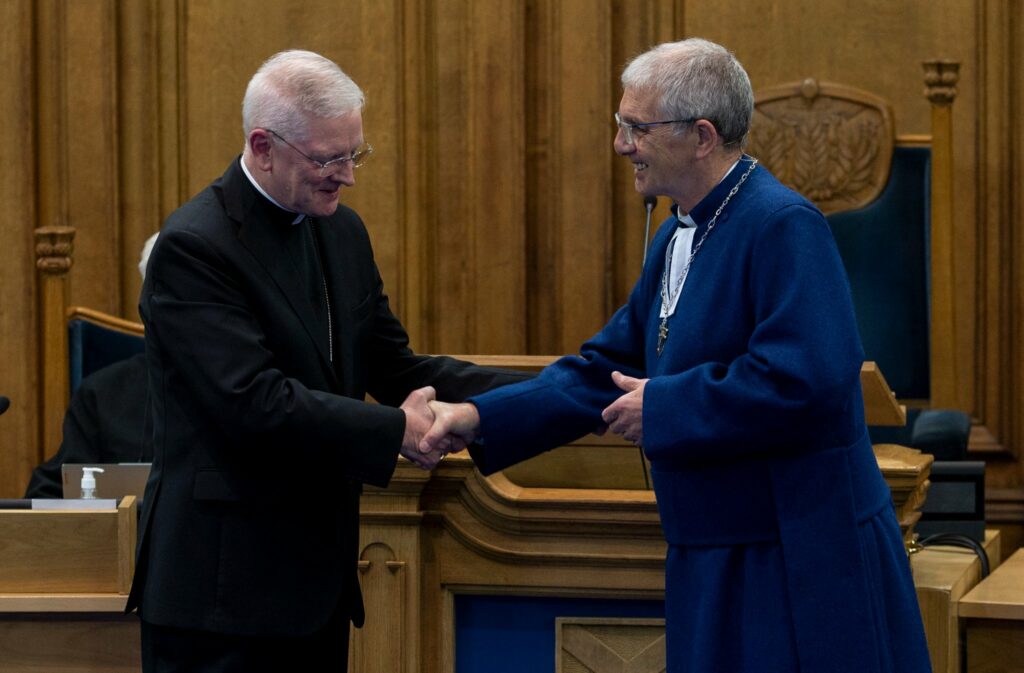 The Right Rev Dr Iain Greenshields. Moderator of the General Assembly of the Church of Scotland, shakes hands with Archbishop Cushley.

Rev Alexander Horsburgh, Convener of the Ecumenical Relations Committee told the General Assembly that friendship is a key Biblical concept for all followers of Jesus.

"We are declaring a friendship which already exists, which has existed for a long time, and we want everyone to know about it and understand it. By saying out loud that the Church of Scotland and the Catholic Church in Scotland are friends, we contribute to changing, not only the narrative of our churches, but the narrative of our country too. There is no going back.

We, the undersigned, representing the Church of Scotland and the Catholic Church in Scotland, wish publicly to express our recognition of each other as Christians, and as children of God in Christ (Galatians 3: 25-28). We recognise each other as brothers and sisters in Christ, and we wish to express our friendship and respect for one another as fellow Christians, citizens and partners in announcing the kingdom of God in our land.

Since the World Missionary Conference (Edinburgh, 1910), and the Second Vatican Council (1962-1965) much has been done ecumenically to repair what was broken and to restore mutual respect and friendship.

A great deal has been achieved spiritually, practically and affectively, through joint prayer among our parishes, various joint commissions, and the growing knowledge and appreciation of each other as Christian friends and fellow pilgrims.

Progress has been made on that which we hold in common.

We believe our faith to be rooted in that of the Apostles, Christ's first disciples, those who knew and followed our Lord in this life. We recognise and treasure the Sacred Scriptures, as God's revelation of His love for all humanity. We recognise and hold in common the great ecumenical councils of the first five Christian centuries.

We recognise, as our common heritage, the Gospel first brought to our shores so very long ago. We recall with gratitude to God the earliest missionaries, our forebears in the faith, who lived and preached the Christian faith to our land. We recall those from that time who led and formed the Church, nurturing a society inspired by Christian values, including St Ninian, St Columba and St Margaret.

We recognise the hurt and the harm that our forebears did to each other in times past, and we repent and ask forgiveness of one other. We also recognise that, even in more recent times, much could have been said between us more kindly, written more magnanimously, and done more charitably, to promote pardon and healing and friendship among Christians in our land.

There remain points at which we have not yet found a meeting place, and it is true that some questions still divide us.

Acknowledging what separates us still, we reaffirm that what we hold in common is often greater than what divides us. While recognising that unity does not mean uniformity, we commit ourselves to continuing our pilgrimage towards greater unity, as we believe that it is the Lord's will that we be one (John 17: 21). We trust that such developing unity in Christ is the Lord's work and the Spirit's doing.

Looking towards the future

We therefore pledge ourselves to live as sisters and brothers in Christ, in public and in private, in life and in mission; to pray with each other and for each other; to be good neighbours, both to each other and to all people among whom we live, of all faiths and none; and to work together for the common good of the nation, as it is given to us to see it.

May there be an ever more united Christian voice in the land, informed always by the charity and love of Christ and our call to participate in the mission of God. May we contribute to the good of society, while humbly learning from others and from our own mistakes. May our theological reflections and initiatives together thrive; and may our pilgrimage together in our dear land of Scotland bear much fruit to the good of all, and to the greater glory of God.

This is an abridged version of the article 'Kirk's General Assembly endorses Saint Margaret Declaration', which can be found on the website of the Church of Scotland.

« EVENT: Join us for a Family Afternoon on 25 June
Headteachers meet on faith and education »