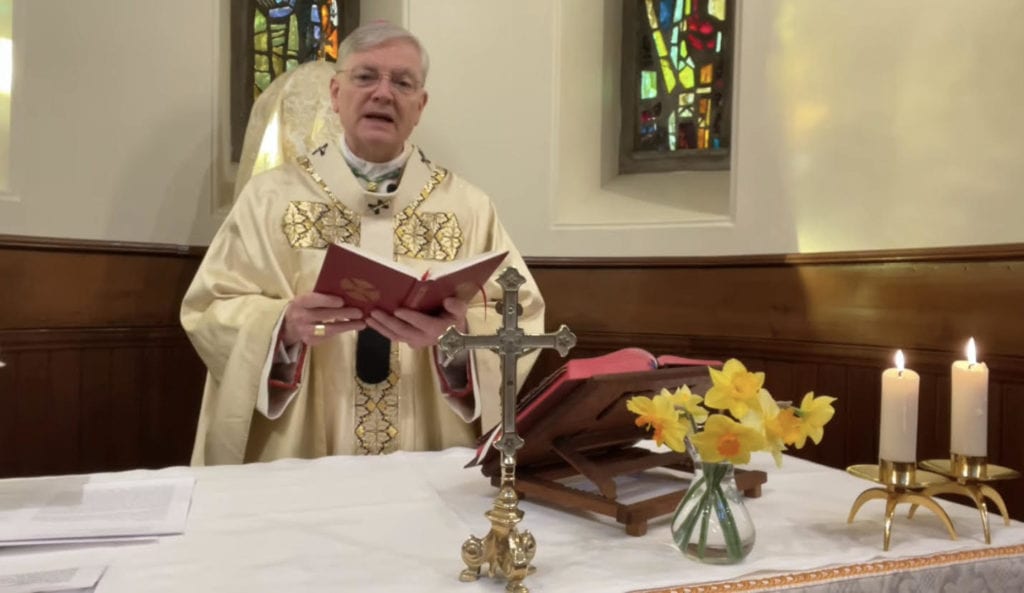 HOMILY: 'Let us see the risen Christ in each other'

A very happy Easter to you all!

During the last three days, we have been celebrating the great work of our redemption.  Jesus submits himself to death for our sake, and is taken from us.  And today, he is restored to us, mysteriously through his resurrection, and, by the gift of his holy Spirit, His life-giving presence among us continues, fortifying the Church, and giving us forgives, comfort and hope for a better life here, and a blessed life to come.

On Thursday night, we move from the Lord’s presence among his friends at the last supper, his last night in the flesh in this world, to him being taken from the disciples in the night, betrayed by a kiss.  As a memorial of His presence, he leaves us the Eucharist, something that we continue to treasure as His unique presence among us today, and indeed in every Sunday Eucharist.

But after His arrest, not only is he taken from the disciples, the disciples themselves, to a man, abandon him.  He is put on trial alone, he stands before Pilate alone.  He is crucified, abandoned by everyone but a few brave women. He is placed in the tomb and his absence from us is complete.  At the Easter Vigil we read of the empty tomb - but the Lord Himself is nowhere to be seen.  Today we again read of the empty tomb – and again the Lord is absent.  Where is he? If he is absent, what are we celebrating here today?

In this morning’s gospel passage from St John, the women ask that question on our behalf. “They have taken the Lord out of the tomb - they say - and we don’t know where they have put him.” The Lord is apparently absent – certainly his mortal remains aren’t there any more.  But we know that the Lord is not in fact absent  - he’s simply not here at the tomb.

In St Mark’s gospel, heard at last night’s Vigil, we see a hint of what is going to happen then, and what happens here now among us.  The mysterious young man at the tomb says, “Go tell the disciples and Peter, they will see him in Galilee”.  The disciples will see the Lord in their home, when they are gathered together, and when they are gathered specifically around Peter.

Similarly, in today’s passage, Peter becomes a key to our connection with the risen Lord.  We too are being told that, where we gather as disciples of Jesus, with Peter, we gather in the presence of the risen Lord. He is among us as we retell this story.  He is among us as we celebrate the Eucharist.  Our hearts burn within us as we remember him.  As we proceed along the Way, here and now in this life, he walks beside us.  Where two or three are gathered in his name, he is there among us.

We gather today as the Lord’s disciples.  We gather as the friends of Peter, and in communion with his successor in the see of Rome.  And we gather to remember and offer up Him, the lamb of the sacrifice who gives us a share in his death, so that we might have a share in his life. The proof of the transformation that took place all those years ago, the proof of Christ’s real but now mysterious presence is us, the Church, here and now, gathering, recalling and celebrating his memory.  Whenever and wherever we gather, the risen Lord is here in our midst.

At Easter, Jesus is definitively revealed as the Son of God.  Jesus of Nazareth, Our Master, has been revealed, not just as the risen Lord, but as the Lord of all creation.  Through the Holy Spirit, poured out by Him into hearts, He is present again among us, restoring us, rebuilding us in a way never known or seen before.  He is present to the whole of creation in a new way.  The Lord is risen – and he is present among us now, and forever until the end of time.

He speaks to us; he blesses; he confirms; he commissions.  His presence is real, but mysterious; just out of sight, but here among us none the less.  Let us look out for him then, in the Word of God proclaimed, and in our sacred celebrations.  Let us see the risen Christ in each other, let us reflect him and His glory to each other.  And let us bear Him bravely to the world that He died to redeem.

A very happy Easter to you all! God bless you.