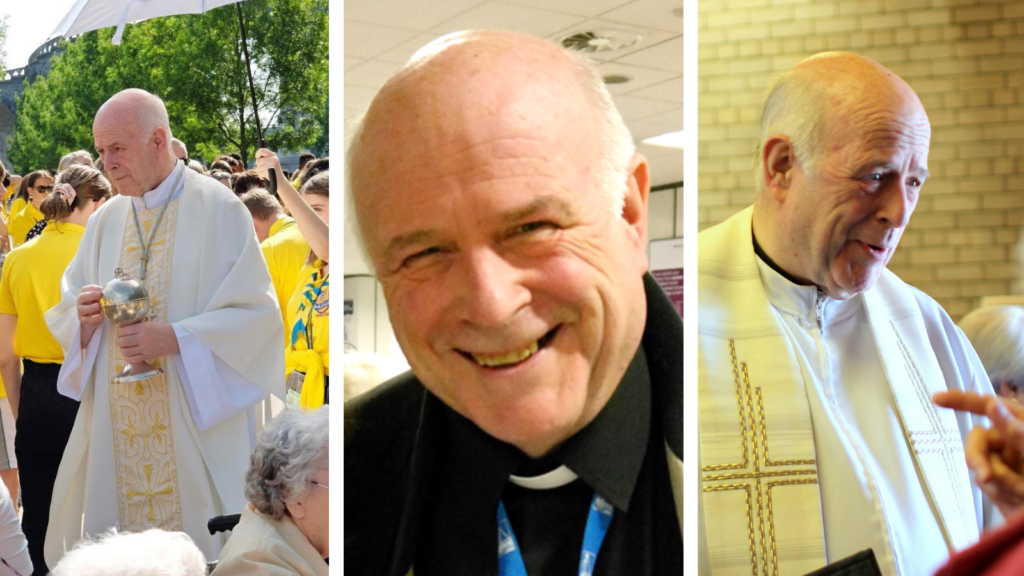 The outpouring of tributes made following the death of Mgr Anthony Canon Duffy did not come as a surprise to his family.

Such is the memory of the man they said “worked, lived and breathed solely for the good of others”.

That was demonstrated in his dedication to Lourdes; he was an energetic and welcoming presence for pilgrims and attended the shrine every year, save for two occasions.

In 1975, Pope Paul VI proclaimed a Holy Year, with special indulgences granted for those who journeyed to Rome. While that meant no trip to France, he and a group of volunteers arranged a mini ‘Lourdes at Home’, taking a group of sick and disabled people down to St Andrew’s College in Drygrange. The event also saw Bishop James Monaghan attend. Mgr Duffy was prevented from attending in 2020 due to travel restrictions, following the coronavirus pandemic.

Mgr Duffy became pilgrimage director for the Archdiocese of St Andrews & Edinburgh in 1983, a role he continued with compassion and good humour until his death.

He would join volunteers in helping transport the ill and disabled on a jumbulance, and from 1986 to 1998 he was the chaplain to the Association of the British Lourdes Pilgrimage Hospitalites (ABLPH), a forum for the many groups involved in organising pilgrimages. He enjoyed representing the Archdiocese at its annual meetings in Lourdes each February.

The Edinburgh Hospitalité and Pilgrimage Committees said: “For the Lourdes community, the sense of loss is profound as Fr Tony was our Pilgrimage Director for many years.”

The day following his death, a candle was lit at the shrine in his memory.

Anthony Leonard Duffy was born in Edinburgh on 27 May 1947 to Harry and Lilian Duffy and was baptised at Sacred Heart Church in Lauriston.

He was an only child and grew up in a tenement in the Grassmarket area of the city, attending nearby St Ignatius Primary School in Tollcross then Holy Cross Academy. He was heavily involved in the Scouts at St Patrick’s Church in the Cowgate, and the Friday night gatherings would lead to lifelong friendships and a likely spiritual spur leading him on the path to priesthood.

One such friendship was with Fr Ian Laurenson OFM, a chaplain to the scouts. Mgr Duffy, along with fellow Edinburgh-based priest and former scout Gerry Hand, would later visit Fr Laurenson in South Africa just before his death in 2012.

Mgr Duffy left school in fifth year and found work with the Bank of Scotland in Edinburgh.

He quit this job after two years to test his vocation to the priesthood and was accepted into the seminary at St Andrew's College in 1967.

He was a good footballer and enjoyed playing for the seminary team. As a keen singer he was part of a folk group with fellow seminarians called ‘The Coblers’ who would play for local community groups throughout the Borders. As it was the ‘swinging sixties’, his mother made flower pattern ties for the group to wear while performing.

After six years of study, he was ordained by Cardinal Gordon Gray at the Sacred Heart Church in 1973.

In 1984 he was appointed parish priest at St Mary Magdalene's in Bingham, Edinburgh, where he ministered for five years.

He served as Treasurer for the Archdiocese for over 30 years and was a canon of the Metropolitan Chapter. Until his death was parish priest at both St Cuthbert's in Slateford, which he had served since 1989, and Our Lady, Mother of the Church, in Currie, since 1998. Illness in the weeks before his death meant he had to step back from the role. In recent years he was the Catholic Church’s representative on the City of Edinburgh Council’s Education, Children and Families Committee.

He served as a chaplain for St Cuthbert’s Primary School and St Augustine’s High School for many years.

The pile of cards in his hospital room at the Western General from primary pupils demonstrated the fondness with which he was held (hospital staff said his room was “filled with love”).

Following his death, a statement from St Augustine’s said: “He was a huge presence for us and very happy to be part of our school community.

“He loved his time here, pinching chips at lunchtime, telling you your tie was on upside down and being there for us when we needed him.”

He would take part in school ski trips and is remembered for keeping company any pupils who were unable to ski.

In 1984 he drove a minibus to Rome for pupils, camping en route, when they had an audience with the Pope. A former pupil said: “He knew exactly how to handle us. He never insisted that we attend any of the services he held in his tent. I respected him so much for that.”

Another former pupil, Judith Ralston, now a BBC weather presenter, credited Mgr Duffy with helping her become an opera singer: “This lovely man was with me all the way through my formative years. He took me to my first opera, the one that inspired me to become an opera singer.” Mgr Duffy himself was no slouch when it came to singing and at one time was a member of the Archdiocesan Cathedral Choir and the Edinburgh Festival Choir.

The passing of Mgr Tony will most profoundly be felt by his family. They said: “Tony was the first port of call for family baptisms, marriages and funerals. He had no time for fuss or undue ceremony, because he didn't need it, as his liturgies demonstrated.

“In the priesthood he quite literally found his true vocation; and the grace of ordination fulfilled his natural talents.

“An only child himself, he revelled in his wider family particularly his nephews and nieces as they grew to adulthood and had their own families. He was a favourite uncle, and they will miss him enormously. As do we all.”

For a man who loved social interaction and ministering to people, the pastoral constraints of lockdown, which restricted visits to care homes and closed schools, chafed with him before illness took over.

He died peacefully at the Western General in the early hours of Wednesday 12 May 2021 fortified by the rites of Holy Church. He was 73. His funeral took place at St Cuthbert’s on Tuesday 25 May and his final resting place is with his mother and father at the city’s Mount Vernon Catholic Cemetery.

With attendance restrictions in place due to the coronavirus pandemic, it meant far fewer people were at the funeral than would be expected for a man who made a profound and positive impact in the Archdiocese and in Lourdes.