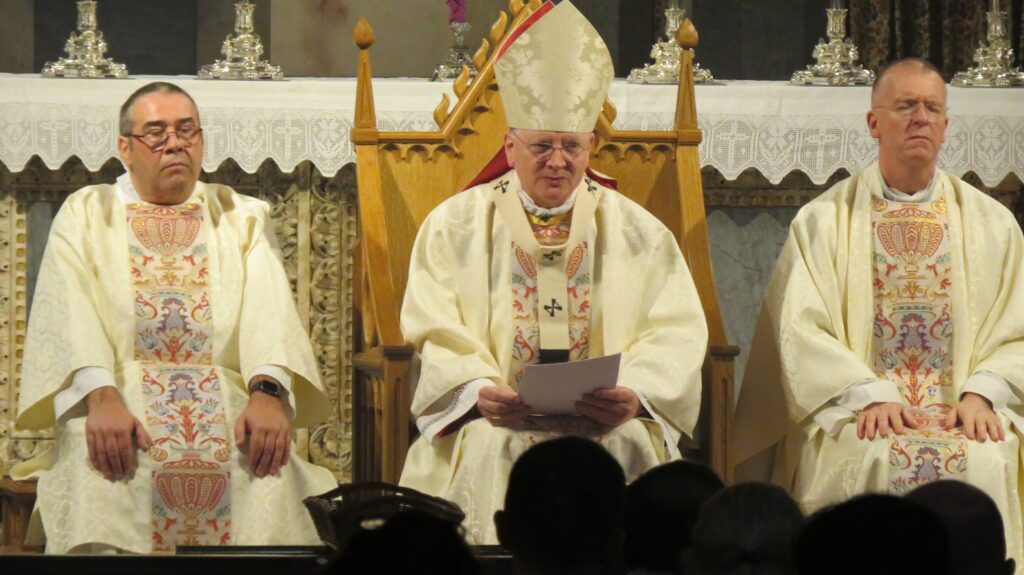 He told those present to "take heart from the Lord's loving gestures" at the Last supper, when Jesus establised the Eucharist, the priesthood and washed the disciples' feet.

Archbishop Leo washed the feet of parishioners who represented the apostles to demonstrate Christian service and to reinforce Christ's message at the Last Supper - 'Love one another as I have loved you'.

After Mass the Cathedral remains open for prayer at the Altar of Repose and Night Prayer is celebrated at 11pm. Read the homily below.

Tonight, we begin our three days with the Lord under the great and powerful banner of the Cross.

All the Gospels record how the disciples gradually came to be afraid of Jesus’s appointment with destiny in Jerusalem, that comes into focus this evening.  Mark and the other Synoptics talk of the twelve being in a “daze” and “apprehensive” as it gradually dawned on them that, not only was Jesus, their friend and Master and Lord, not going to be welcomed in Jerusalem; not only would the priests and people not welcome him as messiah, or even as a holy man; they began to see that the authorities were planning to destroy him.  And that might well mean them along with him.

When Simon Peter had called Jesus “the Christ”, they thought that he was bold, but they had also come to believe that he was right; that Peter’s great and insightful declaration of faith in Jesus as the Messiah was a real turning point, filled with grace and with power from on high; they felt confident in Peter and in the Lord; they had seen the signs; they felt they understood; they believed. And yet they were human too, and their antennae were telling them that something was now going awry, that all was not well, that those who led the people, who knew the Law of Moses, those who were good and wise in Torah were convinced that Jesus was not what he claimed to be; and worse, the disciples could see and feel that the opposition to Jesus was growing stronger, and that it was getting deadly.

So why follow Jesus now, who had set his face so markedly towards Jerusalem?  Faith, love, loyalty?  Something that they had glimpsed in his words or in his actions? Something wonderful that they had seen and heard and touched with their own hands?

Their misgivings were growing. But in John’s Gospel that we see another reaction among the twelve.  We hear one voice that’s definitely not afraid; and it’s the voice of Thomas, the supposedly “doubting” apostle.

At the death of Lazarus, Jesus is heading towards Jerusalem and faces his end, but on the way he goes to the house of Lazarus.  He sets off late, and he gets there after Lazarus has died.  He arrives at Bethany and there gives his greatest sign: he raises Lazarus from the dead – and this gift, of life restored to Lazarus, is not only frowned upon by the priests; it becomes the reason par excellence that provokes the High Priest and his council to pass sentence of Jesus, and have him put to death.

By a double irony, however, this stroke also becomes the very means by which Jesus the Messiah, the Lamb of God, slain by the high priest, takes away the sin and death of the world, and restores life – and not just to Lazarus, not just to believers, but to the whole of God’s good creation.

But before any of this can happen, the disciples are getting more and more afraid of going with Jesus to Jerusalem, as all the signs of Jesus’ voluntary doom approaching.  Meantime, Thomas sees the Lord resolutely heading towards the crisis in Jerusalem, and he too makes a public stand, and takes a decision.  He doesn’t quite know what he’s saying, yet, but John records his brave words, as he says to all the disciples, “Let us go too, then, and die with him”.

We already know of the uncertainty in the minds and hearts of the disciples; we will learn shortly of Peter’s brittle, though affectionate attachment to the Lord; we will also see tomorrow the silent courage of Our Lady and the Apostle John at the foot of the Cross and its horror.  Peter’s declaration that he would die for the Lord will become source of shame to him; but we will never hear again anything quite like Thomas’s call to courage, so bold, so prescient, so impossibly noble at a time when the darkest clouds were menacing them all.

Thomas gives us, then, a wonderful insight into the human drama taking place in the breasts of the followers of Jesus as he approaches Jerusalem to face this night of betrayal and death.  In the small world of Judea, they knew something was amiss; they knew their ideas and plans for greatness were not materializing.  Some had already stopped believing in Jesus and going with him; one was planning, even now, to betray him.  But most of them stayed loyal to Jesus to some extent, compelled either by love for him or by his authority.

Not everyone had Thomas’s courage.  That is why the Lord’s great gesture of love, the washing of the feet tonight, becomes such a great sign of affection.  Not just out of brotherly concern, or of friendship, but of loving encouragement.  It is a sign of love; but it is also one to make us take heart. We do not know what the Lord will ask of us one day; all we know is that he loves us, in spite of our betrayals, and lies, and cowardice, and half-heartedness.  He loves us this much – and this, even before we approach the agony of the Cross which he chooses tomorrow to undergo for us.

My friends, let us take heart from the Lord’s loving gestures here tonight, both in the washing of the feet, and supremely in the Eucharist, the memorial of his death, and the greatest sign of his love and encouragement. The Mass tonight links us forever to his love for us and to its pledge in his death on the Cross.  So let us be encouraged by him in what we do here tonight in his memory.

Let us in our turn be loving to towards each other and to the Lord; let us watch with him; let us renew our faith in Him.

And in these days, let us go, again, to die with Him.