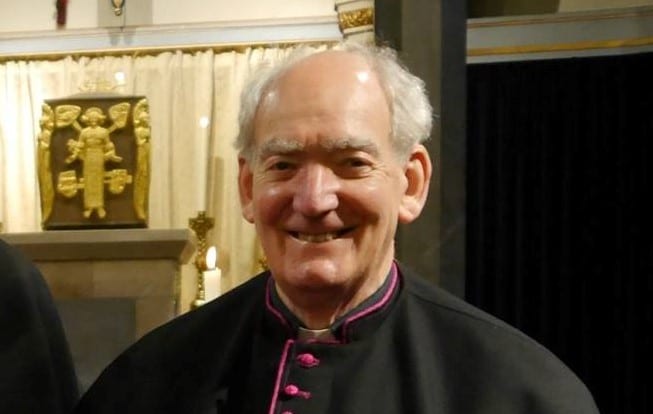 Tributes have been paid to a popular priest who ‘gave joyful service to his people’.

Monsignor Brian Provost Halloran died suddenly on Sunday evening, 1 March, at his home in North Berwick. He was 84.

He was parish priest at Our Lady, Star of the Sea, in the town, which he had served since 2015.

Archbishop Leo Cushley said: “Brian Halloran loved being a priest and was an example of hard work and joyful service of his people. He was the best of the old school and served us for 60 years. He died an active priest – those who knew him would agree that would have been his wish. He was a good man and a fine priest. May he rest in peace.”

Last night a much loved priest of our diocese died.

Mgr Brian was born in Aberdeen before his family returned to Edinburgh, where he attended Holy Cross Primary before heading to Blairs junior seminary. His path to the priesthood continued at St Andrew’s College, the seminary in Drygrange, and he was part of the first intake of students when it opened in 1953.

Father Andrew Forrest, of St Mary of the Assumption in Bo’ness was in the same year as Mgr Brian at St Andrew’s College.

He said: “He was very dedicated and meticulous in doing things the best he could for the diocese, as a priest of the diocese. He stuck to the old principles that have stood the test of time. He will be missed.”

Fondly remembered
Mgr Brian was ordained at St Mary’s Cathedral in Edinburgh in 1959 and served at various parishes across the Archdiocese.He is fondly remembered in St Andrews, where he was parish priest at St James’ Church from 1987 to 2010.

Fr Scott Deeley, chancellor of the Archdiocese, was a student at the university while Mgr Brian was its chaplain.

He said: “I know that many St Andrews alumni will be remembering Monsignor Halloran today with great fondness. He was a dedicated priest and an influence for great good in the lives of many young people. May he rest in peace.”

While in St Andrews, Mgr Brian wrote a PhD thesis that led to the publication of his respected book The Scots College, Paris, 1603-1792. He also later carried out missionary work, helping spread the gospel in Armenia (2005) and China (2006). He spent a year in Yendi, Ghana in 2010 as part of a sabbatical.

He was the senior priest of the Archdiocese and Provost of the Metropolitan Cathedral Chapter.

Responding to the news of his death, parishioners from across the Archdiocese paid tribute on social media.

« Praying today for survivors of abuse
Eagerly awaiting the joy of becoming Catholic! »